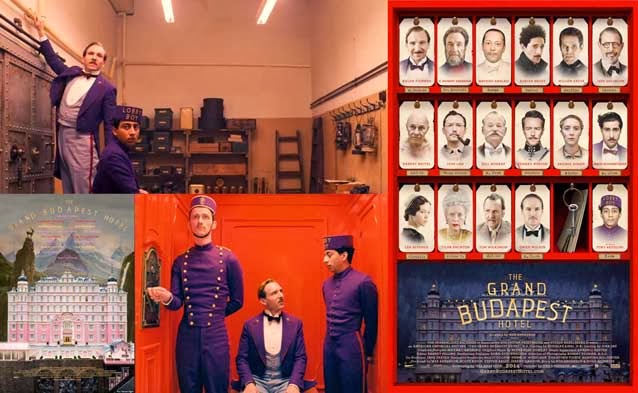 There’s something about a Wes Anderson movie that creeps up behind you and just grabs you right from the start, pulling you into the realm of the story and providing a totally immersive experience for their “always too short” running times.

I was trying to pinpoint, after leaving a screening of his latest film, The Grand Budapest Hotel, just what makes the majority of his movies, as far as I’m concerned, just so perfect. In the end I’m forced to confess that there’s no “one” real signature element of his style which can take the full responsibility for the absolute joy one gets from watching his stories play out in front of you. It’s a terminally infectious combination of all round stylish movie-making infused with an absolute perfection of execution, even at the points where he deliberately dumbs down on the technical expectations to feed the whimsy of his pieces (think the various stop-motion sea life in The Life Aquatic with Steve Zissou or the high speed ski chase in this movie, by way of example), that feeds your mind and allows you to switch off to all concerns other than the shadows and light playing out in front of you in a darkened cinema, that allows for such a fantastic marriage of small scale stories made epic.

I usually hate doing lists but the elements in and of themselves are easy to identify, of course:

1. The clean, sometimes sweeping and sometimes static, but always simplistic movements of the camera through an artifical environment which leaves you in no confusion as to where you are.

2. The matter of fact neatness of the sets which are always easy to understand, with the director often giving you an overview far more detailed than any mere establishing shot, which perhaps mirrors the agenda of Kurosawa to give the audience a very clear map of where the action is transpiring before fully spinning his narrative web.

3. The level of detail in those sets. They are always quite neat, which lends an air of art versus reality, and they are always filled to the brim with little insights into the characters that inhabit them.

4. Perfect casting, employing actors who are some of the best in their field and who are not just playing to type. They are being used in a movie which, you can tell, they want to be in rather than just pick up another pay cheque. This film includes cameos and extended cameos from a large number of Anderson’s back catalogue of actors and actresses and it’s a joy to watch each one pop up, one completely uncredited one (even on the IMDB) for literally about one or two seconds of footage. I’d do a list but it would go on forever.

5. A musical undercurrent which is usually quite diverse in its style and sourcing, although The Grand Budapest Hotel is slightly different in this respect and I’ll get to that a little later.

6. The quirky and fun writing which is always witty and more often than not takes what, to another writer/director, would be a fairly small scale story, and then imbuing it with a sense of grandeur which allows it to shine at its own pace... which is rarely slow or boring.

7. A constant and stable pacing, presumably arrived at through the editing, which allows the brisk intermissions of action... random fleeing, window jumping, cat throwing etc... to come alive as startling little highlights, enhanced by their throwaway treatment, rather than muffled by this artistic attitude.

I could go on, but those are the main ones.

And, of course, The Grand Budapest Hotel has all this in spades... apart from, to a certain extent, the musical element... but the treatment and use of that here shows a trust perhaps lacking in the director’s previous work and, like I said, I’ll get to that soon enough.

The Grand Budapest Hotel tells the story of the titular hotel’s concierge through the eyes of his lobby boy. We have a Russian nesting doll format for the story within a story within a story structure, but the main narrative is told through the eyes of the lobby boy from his old age as the rich owner of the hotel (I’m not giving anything away here... you’ll know this much within the first 10 minutes of the movie). Anderson uses shifting aspect ratios to differentiate between the “narrative stacks”, with most of the movie being screened in a 1.33:1 aspect ratio, and it works pretty well, with the shifts from one ratio to another being mostly noticeable on purely a subconscious level once he’s done it a couple of times.

The performances, as you would expect, are astonishing. Ralph Fiennes has finally got my attention and possibly respect as an actor and he is an absolutely joy to watch in this as a slightly camp womaniser who appreciates the finer things in life. His lobby boy, played by relative newcomer Tony Revolori, is an absolute wonder and, as I said, this is all the norm in a film directed by Mr. Wes Anderson. And, honestly, Tilda Swinton's old age make-up is absolutely amazing. I rarely find “ageing” make up in any way convincing but this time it’s really impressive. I didn’t at first realise I wasn’t watching an 80-something actress unknown to me.

And Willem Dafoe’s caricature of an evil henchman is at once thoroughly sinister and over-the-top funny. It’s not got the depth of the role which Dafoe played for Anderson in The Life Aquatic, but it’s not supposed to. Conversely, Edward Norton’s character is really just an extension, albeit in a different profession, of the character he plays in the wonderful Anderson movie Moonrise Kingdom (reviewed here). And it’s just as poe-faced and funny.

But don’t get me started on Harvey Kietel. You may find yourself bursting out with laughter just at his appearance in this one. He's always so good in this stuff.

Wes Anderson tends to employ a lot of “found” needle-drop style music in his films, although this is often supported at times with an actual composed score to give certain moments the kind of unity which music can easily create to glue different parts of a movie together with a leitmotif or atmospheric approach. Mark Mothersbaugh’s music for The Life Aquatic, for example, utilises a melody in different orchestrations... from something that deliberately sounds like it’s being played on a cheap, 1980s Cassio synthesiser through to a full-blooded action cue representation of the theme... to bring together the elements as a unified “Team Zissou” force within the film. Similarly, a more subtle but similarly progressive set of orchestrations is employed by the always brilliant Alexandre Desplat with his “Heroic Weather” theme in Anderson’s Moonrise Kingdom, to further enhance the sense of unity and harmony with the various characters.

In The Grand Budapest Hotel, Anderson pretty much throws the needle-drop element, cat-like (no don’t ask), out of the window and instead has hired Desplat to provide a full score and, while it does tonally go through a needledrop like quality in terms of the style in places, it finally feels like an Anderson film has a full and cohesive musical direction and, given that it’s composed by Desplat, of course, it’s an absolutely marvellous piece of scoring. The CD should hopefully be arriving through my door for a closer listen sometime this week, I hope.

And that’s about it. I could go on and on about how wonderful a movie this is but I think you’ve probably got the idea by now... at least if you’ve read this far. What I will add though, is this...

I’ve seen most of this director’s work now and I would rank this movie as fourth within his oeuvre. But it’s an absolutely brilliant and joyful experience and I plan on seeing this movie several times more in my life. I may rank it fourth in his movies but it’s fourth out of four absolute masterpieces he’s made. If that isn’t enough of a recommendation for you to rush out and see this truly splendid artefact of cinematic wonder then I don’t know what is. Run, don’t walk*, to your nearest cinema and see this fabulous creation for yourself.

*Please note, this writer takes no responsibility for any accidents, injury or death resulting in the investment of this advice.