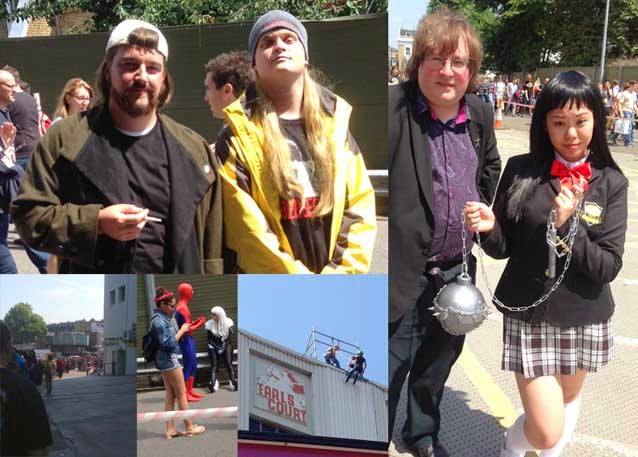 The Geek Shall
Inherit The Earth*

It was about four years ago, not long after I started writing this blog of reviews, that I first mentioned my affection for the annual London Film and Comic Convention (and you can read that review here). Although I’m sure many of you will call me sad for saying so... it’s basically the highlight of my year. The one Saturday out of the 52 per annum which I plan my summer holidays around so I can make sure I am in London to attend. I’ve been going to this one for something like 8 - 10 years and, without fail, I always manage to do it.

Not this year though, although it wasn’t for want of trying.

Every year I get to the venue about an hour early (the show opens for regular “on the door” tickets at 11am) and either start or join the queue to buy tickets. Usually there’s around 3 - 50 people in front of me and, once they open the doors at 11am, I’m usually in and looking around my favourite stalls of knick knacks. And that’s another point I want to mention, by the way, before I go on to describe what a total fiasco this was this year... I’m not there for the celebrities. The queues for them, once you’ve bought a ticket for their own specific queue, are usually fairly lengthy and take a long time to get through... much too much time for me to be wasting queueing when there are such interesting fantasy themed goods on offer such as replica samurai swords or Buffy The Vampire Slayer knickers. In fact, the only time I queued for a celebrity at the London Film And Comic Con was the first year I started attending the event more regularly... so 8 - 10 years ago... and that was for Elvira herself, Cassandra Peterson. But that was in a time when the individual queues moved pretty fast and I was only waiting for her for about a quarter of an hour.

Last year was no exception to my usual routine but I did notice, after an hour or so, that it was getting very difficult to move around in there. I took a photo from a lounge above the cafe last year and I remember tweeting something along the lines that the organisers really did need to address the fact that the event had kind of outgrown it’s venue. It was never as popular as it was last year and it made the show less enjoyable because the geeks, who shall inherit the earth, no doubt, were out in force. You couldn’t count the number of fezzes, stormtroopers and superheroes on the fingers of any number of hands you and your friends brought with you. The sheer number of people coming to this thing and being crammed into an increasingly inadequate space, in costume or just in civvies like me, was a real problem.

This year, I did my usual thing and got up at a time best left unmentioned to arrive for the queue at Earls Court at 10am. I wasn’t expecting to have literally thousands of people in front of me. The queue, usually a relatively small number of people at best, went right around the building and also did about eight zig zags around the front area... before even getting to the back of the buildings where the main entrance to Earls Court 2 is. It was staggering. The last two times I’d seen anything like this was when I was a young boy in the early 1970s. I remember queuing for many hours to see both a Salvador Dali exhibition at the Tate Gallery (when there was only one Tate Gallery and not a whole fistful ilke there is today) and the Treasures Of Tutankhamen at the British Museum (the real ones, not the replicas which were on show over here lesss than a decade ago).

But, it was still only ten o’clock so I figured I’d still be able to get in by 11am, right? How wrong I was. To say the queue was slow moving would be an understatement. And it only got bigger and bigger after I arrived... snaking back on itself so many times that it was soon literally cascading out into the High Street. This was not good. As the day wore on, many queue companions, people I’d met there that day, had dropped out. Things were getting pretty ugly by 1pm. There was one guy dressed up as Doctor Who and he was shouting at the top of his voice to anyone that would listen that his day had been ruined. Well yeah, we were all victims here, actually, mate. All our days had been ruined and none of us, it would seem, are going to be offered any compensation by the organisers for the £6 - £30 travel costs, depending on where you were coming from, to basically go and stand in a queue all day.

The various queue stewards were bearing the brunt of the complaints quite admirably and they were clearly not to blame for the lack of organisation from the people running the show... but they were really left in the dark, it seems to me, on how to handle the sheer numbers of people out in force this year and, I can hardly blame them for not having an organised response.

I blame the organisers.

If I could see this coming last year... why couldn’t they?

After a while the building became over capacity... that is to say, it was pretty much illegal to let any more people into the place until various people had left. So they just kept closing the doors. Things were getting ugly. It was looking like it would be an unruly but immaculately costumed mob bearing pitchforks and lightsabres at some point. I chatted with various people, some of them cosplayers, some of whom you can see in the photos at the top of this post, and many of them were very patient people and, like me, most of them gave up at some point in the day.

Now the day wasn’t a total loss for me in that I usually get one of the guys who runs a stall at the Camden and Westminster Film Fairs to order in a load of fairly unusual stuff for me, so it’s worth my while going. Halfway through the day he managed to get a break and brought the stuff he’d got in for me out to the queue so I could buy it from him there... so that was really good of him. However, the reports of what was going on in the building were less than encouraging. Apparently, the place was packed to bursting with nobody being able to really get to look at the stalls they wanted to because everywhere it was all at something of a standstill... human traffic jams were all over the place, it seemed. And, when I inquired if business for that day was fairly good for his stall, he basically said that it was terrible. Everyone was there, it would seem, for the celebrities and those that could manage to claw their ways through to the stalls were not buying, by the sound of it. They were blowing all their money on the celebrity photo shoots. Not too encouraging.

So there we all were. An angry bunch of, mostly, humans. To paraphrase a popular sci-fi TV show of the 1970s, we were “a ragtag fugitive fleet on a lonely quest... searching for the entry tills of London Film & Comic Con."

I stuck it out for as long as I felt I was able to in that queue. I’ve had a terrible cold all week and, on top of that, I’ve been getting some problems with my feet which means I can’t be on them for too many hours without getting some chronic pain. So I had someone save my place and I scoped out the rest of the queue. Well it looked like there was at least another couple of hours to go and I wasn’t going to be getting in any time soon... let alone the thousands behind me, poor things. My heart went out to an old lady with a walking stick who must have been in her sixties at the very least. She was on her own and must have been in the queue longer than I had been. Ditto for a blind guy in the queue who only had his guide dog to keep him company... I couldn’t believe they were letting these people queue. These people needed to be fast tracked inside somehow, I think. That was just plain wrong.

At 2.30pm, after I had been queueing for around four and a half hours, I called it a day. Things weren’t getting any better and the human bladder can only last so long in the sweltering heat. I’d not eaten since my breakfast at about 6am and my stomach felt like it was folding in on itself. So I left the queue and gave up this year. I was not best pleased about wasting my entire day on this exercise with no real updates or organisational set up to be able to cope with these numbers. This was a really bad idea.

When I got home I jumped on the message board for the London Film & Comic Con to see what people were saying. It wasn’t exactly a love fest on there and there were some echoes about the bad organisation of the event which pretty much mirrored what I’d been hearing from people in the queue all day. One person on the board tried to defend various issues by saying that people who were in the queue should have planned to bring water with them etc but, seriously, if we knew that it was going to be packed out with at least ten to fifteen times the amount of people who usually show up for these things, then we certainly would have.

Frankly, to end this post with the kind of sentiments that I was hearing from everyone’s mouth in the queues.... the organisation of this event and the lack of a viable, or at least visible, “reflex action” contingency plan to what was, from very early on in the day, a big problem with overcrowding, was a complete joke. This is not how you react to an event like this if more people turn up than you were expecting. It was a travesty and I bet half of the geeks in the queues could have done a much better job at identifying these kinds of problems months before they happened. I’m not at all happy about the way things were handled here... and this definitely wasn’t the highlight of my year in 2014. Which is a real shame.

*I use the term geek in the modern accepted parlance, which I personally don’t accept but am doing so because it suits my title pun. Please remember that the term geek is actually a reference to a carny act of a particular style of performer who would bite the heads off of live chickens. That’s what geek really means. But I’ll let it slide for this post only.