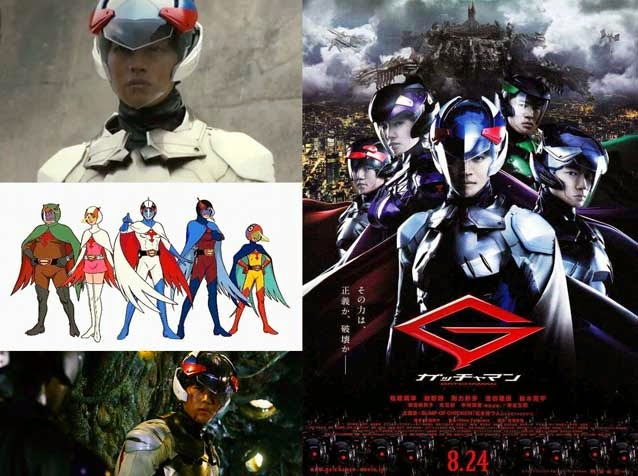 Back in the late 1970s, as a direct result of George Lucas’ first Star Wars movie (reviewed here) taking so much money at the box office and related merchandising, new science fiction films and TV shows were the order of the day. Back around about 1978/79, I used to get home from school some week nights and watch my favourite cartoon show, Battle Of The Planets. Five teenagers who were a “science ninja team” called G-Force, battling against the evil Zoltar who was menacing the earth with his alien forces and devices such as giant, mechanical centipedes etc.

Every now and then we’d flip back to the beloved robot Seven Zark Seven on Centre Neptune, who would fill us in on events that were happening off screen and basically try to tie everything up for us (we didn’t know that was his purpose... hold on, I’m getting to that). This flying R2D2 clone with a cloak and camp voice also had a cute robot puppy dog, One Rover One (if memory serves) and they would also relay instructions back to our five heroes from their own controller.

The five adventurous heroes... Mark, Jason, Princess Astra, Tiny and KeyOp... would dress up in bird costumes and fly around doing acrobatics and taking their enemies out with boomerang weapons before getting into their starship, the Phoenix, and kicking Zoltar’s backside form their joint cockpit. If they were in desperate need, the five would join minds in the ship and “transmute” the hull into a flaming version of itself, known as going into "Fiery Phoenix" mode. The action was cool, the robots were cute and the music was great.

What wasn’t commonly known in the Western world at the time was that the majority of the footage for this particular cartoon show didn’t actually follow in the wake of the science fiction band wagon created by Star Wars at all... it was a cartoon show called Gatchaman which actually started in Japan in 1972 and was popular enough that it ran for over 100 episodes. Not only that, but the versions we were seeing as Battle Of The Planets (I can still hear the narrator booming the title out over the opening music in my head... a much loved childhood memory) were very much changed from what they were originally. I’m told (I’ve never got around to trying to get hold of the original cuts although I’ve got an idea they’ve just been released on blu-ray in the US so... I’ll get there eventually) that the original series was not only a lot more violent than the version we saw (with decapitations etc aplenty) but also a lot grimmer, more depressing and positively melancholic in tone than the Western bastardisation of it... although, to be fair, the main hero... Mark... was never exactly a bundle of laughs in the UK version, from what I remember. Although I do recall flapping around and pretending to be him when I was nine years old.

What was happening was that the stories were being rewritten and softened in tone by the American distributors who were also recording new vocals in English, to match their new stories. The cute robots were added in to give the “much needed” R2D2 knock off element, in addition to filling in and providing links to cover the material that was spliced out, and the music was partially rescored in some places. The evil Zotar, it turns out, was actually a female villain... but we never noticed back in the 1970s because the people doing the dubbing had given him a male, villainous voice and laugh. All the names, of course, were different... so when it came to watching this new live action movie version... well... I basically just name checked them to the cartoon characters who were still in my head, to be honest.

Now this film is a big budget, adaptation of the original Japanese Gatchaman cut of the cartoon show, so I have no idea if it’s faithful to the story of the original version, I’m afraid. It’s a million miles away from the story of the US version but... that was always to be expected, to be honest. Since the movie has, at time of writing, not been picked up for distribution in either the USA or UK, I had to import a foreign DVD of the film. I’m not sure just how authentic a copy it is, but it has subtitles for various languages, including English. A word on that, though. When I say the subtitles are in English, what I mean is that they’ve been written by someone who clearly doesn’t have English as thier first language. Some of the non-sequiturs and bizarre dialogue manifestations are a bit much but... I’ve seen worse. At least I could kind of make some sense of what was going on... so that’s a big plus compared to some translations I’ve seen.

Now then, since this has had no commercial distribution over here, I was expecting the film to be pretty awful, in all honesty. I just needed to see it because of the place the Battle Of The Planets show has in my heart and it’s something I always wanted to see a live action version of.

As it happens, the movie is a hell of a lot better than I imagined it would be. Don’t get me wrong... it’s not the most fantastic movie out there... but it does have as much credibility in terms of both budget and entertainment value as films like the new Godzilla and Pacific Rim manifestations recently at our cinemas (for my reviews of each of these, click here and here). The camera work is fluid, but often gives the impression that it’s hand held, and the editing is nicely done in a way where you won’t get confused. The story is nonsense but, that’s no surprise and, again, it stands up to the two movies I just threw up earlier in this paragraph.

I was unsure of it at first. The alien invasion which gives the film its basis and which leaves humanity struggling, takes place in 2015. Yeah, right. Way to go for completely dating your film before it’s properly outside the stable gate fellas. Even so, the lead in sequence is timed just right and before long we have G-Force in action... locking hands and swooping in a circle to kick alien butt, just like they used to in the opening titles of the Battle Of The Planets cartoon show. And it’s awesome. I was really happy just seeing these characters, who even looked a lot like the original animated versions out of costume too, mixing it up with a load of wirework which was very reminiscent of the action style of the source material.

And that was me happy for the rest of the movie. Sure there are some pacing issues. The six minutes to save Tokyo at the end seems to expand out for over 20 minutes in real time while the characters monologue like crazy with each other, so that was annoying. Also, the twist reveal with one of the characters is telegraphed a mile off but... I was okay with it. It was a logical point to get to in the script. The special effects are great... especially that first fight scene involving a giant and sinister car wheel rolling around and destroying large areas of the Japanese cityscape.

It could maybe have done with a little re-editing and rewriting in the dialogue scenes and the addition of one other action set piece or two but, all in all, it held my attention and it did have a spectacular kind of feel to it. I was disappointed that the music from the original show wasn’t used but, saying that, the score in this does have the same kind of vibe and I don’t think some of it would have seemed out of place if it had been included in the original cartoon. The film even has an extra, “I saw that one coming”, scene after the end credits but, strangely, the Japanese warn you on the subtitles that this is coming before starting the end credit roll... so that was nice of them.

As I said earlier, this isn’t the best film in the world and anyone who was not into the original show, in either of its forms, would probably find it a little simplistic and vacuous. I, on the other hand, loved it for what it was and, considering the budget and the competency of the direction on this thing, I’m really surprised that we’ve not been allowed some kind of release of it over here or stateside. There are even a few English actors speaking their native language in it at a few points. If you were into the original show or, even if you just like the idea of watching multicoloured, flying “science ninjas” doing a dance of death with mechanical, alien doom legions... then there’s not much I can’t recommend about this wonderful addition to the Gatchaman canon. They even got the Fiery Phoenix manifestation in right near the end. So if you ant to see some, not too tightly balanced but thoroughly entertaining mayhem... it’s time to transmute and give this one a spin, methinks.
Posted by NUTS4R2 at 15:15