Birdman (The Unexpected Virtue of Ignorance) 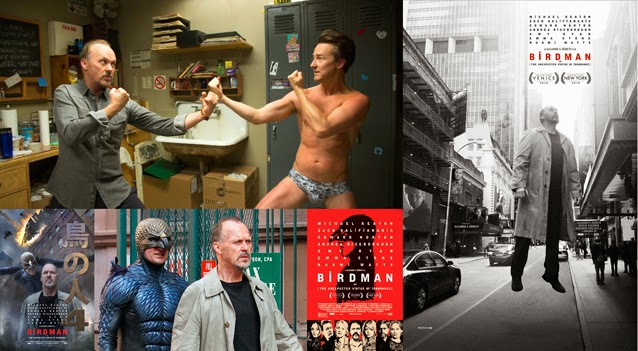 Birdman is one of those rare movies that comes along every once in a while that almost surprises you in it’s insistence to not follow any recognised formula. I won’t go as far as saying it’s unlike anything you’ve seen before... it does share it’s tone with certain other films I’ve seen in the past year, for example... but it’s not the kind of movie making you get to see that often and, as such, it’s a bit of a rare treat when it’s put together as well as it is here.

The story depicts a few days in the life of Riggan Thomson, an actor once a household name for his role in three successful Birdman movies, who is trying to regain his stature by directing and starring in a play based on a Raymond Carver short story. The film follows the previews two days before and on opening night... or rather, it follows all the stuff around the rehearsals/previews and the various challenges which make Riggan question himself and his decisions in life.

Great casting for this kind of movie would, of course, be having an actor who was once a household name for playing a similar superhero role in the late 1980s and early 1990s and then tailoring the details of the role to that lead actor. And, as it happens, what we have here is not just great casting... it’s perfect casting. The film goes with Michael Keaton for the lead and, frankly, it’s perfect casting for three reasons... at least for this humble audience member.

Reason one is... he played Batman/Bruce Wayne in Tim Burton’s Batman and Batman Returns so the Birdman personae is tweaked to that legacy, in part, for this movie. Secondly, Michael Keaton, as underrated as he is by people sometimes (it seems to me), is a truly great actor... so no problems here. And, last but not least, he’s got to be one of the most likeable personalities on screen so, if you want your audience to be rooting for and feeling with the character you’ve created... Michael Keaton is a very good “go to” guy to be able to fulfil that requirement.

And the movie itself, I have to say, is a bit of a minor masterpiece... if such a thing exists.

We have the actor Keaton supported by an absolutely terrific cast, with Edward Norton playing someone suspiciously like the guy the public assumes Norton to be (I suspect) and loads of great actors and actresses who are just absolutely perfect in this movie. You won’t have any problem believing in this film but it’s the amazing technical gymnastics in terms of the mise en scène, which the actors support by being brilliant themselves, that really gets your attention... if you’ll forgive me for using such a “catch all” expression.

That is to say, the film is shot and edited with almost a schizophrenic eye...

It’s all about the camera following the characters around in what is edited together, with various moving wipes and other trickery, to look like the whole thing is shot in one continuous take as the viewpoint follows one person, then catches somebody else and follows him or her etc. However, this strategy is beautifully undermined by the fact that their are many changes of time and costume... which shows that the director is not, in any way, expecting us to think it’s been shot in one take. He knows we wouldn’t be fooled in this day and age and, since there are big jumps in time, etc, then it makes me wonder what the point is of shooting in this style. Well, my guess is because it makes things go incredibly fast... you are usually in the midst of hubbub and general chaos, apart from the odd downtime with certain characters, and as such, the pacing is incredibly energetic. The other thing with this is, perhaps, because the kind of visual turbulence “caught” on screen maybe gives some indication of the mental state of Keaton’s main protagonist in certain places... so maybe there’s a clever case of visual technique commenting and informing the inner monologue of various characters going on here.

What it does do, however, and I’m guessing this isn’t unique to this movie... although I’d be hard pushed to come up with an alternative right now, is allow for overlapping dialogue from the same characters simultaneously in two different sequences. For instance, we can have Edward Norton trying to have sex with someone while we can also hear him in the next scene the camera is panning to, in part of its “one take” style of presentation. Seriously, it’s like Robert Altman on acid here and it’s one of the things that make this film very interesting from a technical viewpoint. It’s also not thrown in your face but done very subtly (I suspect a lot of people will miss it the first time around) so the execution of the idea is damn near perfect.

Surprising moments are had from the way the camera crosses scenes like this and also from the point of view of Keaton’s internal battle with his Birdman personae. It was good seeing Keaton wearing a costume with the blackened out eyes, as his Batman days, again and it was great hearing the Birdman part of his character talking in his old, gravelly Batman voice. This is really good stuff and a lot of superhero fans are going to love this... as they will love the side swipes taken at films like Iron Man and The Avengers (Avengers Assembled, reviewed here) and also the action sequence near the end of the movie which... I will not spoil for you here.

One of the outstanding things about the film is the drum score by Antonio Sanchez which has just been disqualified for, seemingly, the few very quick instances where classical music is used in the film. I think there’s more of a hidden agenda as to why this, frankly amazing and appropriately quirky underscore, has been taken out of consideration by the Academy... especially since The Artist (reviewed here) won the Oscar for a score which people seem to mostly remember as using Bernard Herrman’s score from Vertigo in it near the end, from my experience of audience reaction. The score in Birdman is nicely integrated in at least three moments of on-screen drumming by, in most cases, a single drummer but also by a band in the street outside the theatre at one point. This is quite amazing because what we have going on here, from a technical point of view, is a lengthy non-diegetic piece of scoring (aka with no onscreen source) suddenly transforming into a diegetic/source piece of music and then transforming back into non-diegetic again. This is frankly tremendous and I was thrilled when this happened a few times throughout the course of the movie.

Another interesting point is the question of Michael Keaton’s “Birdman powers” which, frankly, are really nice touches... the opening shot starts off with Keaton’s character levitating, for example. Is it real or in his head? The nice thing about this is... just when you think you’ve got a handle on the answer to that question, the film pulls you back the other way again. Some people will probably say that the very last shot in the movie answers that question for sure but... frankly, in a film where technical flourishes make the very fabric of the media into something less rigid and more flexible in intent, this last sequence doesn’t really answer the quesiton at all.

And that’s about all I’ve got to offer on this movie. It’s a great piece of art and it’s immensely entertaining. At times dark and at other times comic... and very often a mixture of both... the film impresses technically while retaining a huge entertainment factor. It’s definitely worth a watch for any fan of the medium of film and it attacks and challenges a fair few things (like film criticism) along the way, in a very cool and knowledgable manner. One of my top twenty for the year, no doubt and definitely a strong recommendation from me. Miss this one at your peril.
Posted by NUTS4R2 at 12:28