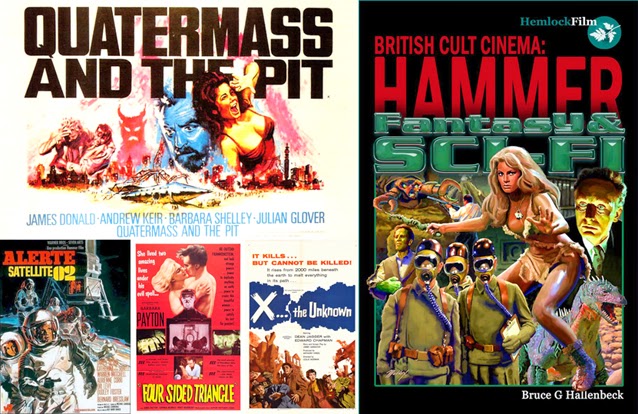 There’s both good and bad things about Bruce Hallenbeck’s 2011 book looking at these specific genres of output from the old Hammer Horror studios. One of the obvious positives of a tome such as this being that it’s rare for any book to focus quite so specifically on a subsection of Hammer films for which they are not the best known. Asides from a few crossover gems which also, it could be argued, fall into the category of horror... such as The Quatermass Xperiment (reviewed here), X - The Unknown (reviewed here), Quatermass 2 and Quatermass And The Pit (reviewed here), this book is dedicated to films which perhaps only the casual Hammer fans might know of and which are, perhaps, not something the general public at large would necessarily have in their minds when they come to think of the output of one of Britain’s most fondly remembered studios.

That this work is well written and, perhaps as importantly, entertaining as well as at least a little informative, is not in question. Hallenbeck weaves words without beating around the bush and leaves you with a very clear idea of just how things were going down on these kinds of movies... at least in the broadest sense. And that’s one of my major problems with this particular volume and one which I know also troubled a friend of mine quite recently when we “compared notes”, so to speak, on this particular volume... the lack of detail and in depth information on the Hammer movies this book focuses on is not as exhaustive as one might have expected for a volume of this kind.

The book’s big strength, that of context, is a bit of a double edged sword because it’s also, at least it seems to me, something which maybe contributes to the lack of exhaustive information throughout the page count. By that I mean, the writer has done a very good job, an excellent job in fact, of contextualising the films he is talking about by giving a brief history of the genre in cinema terms and then continually looking at what else was happening in the realm of science fiction and fantasy cinema at the time of whatever film he is talking about. This is great because it lets the novice film goer understand how certain things fit in to their place in cinematic history... for instance, it’s always good to be reminded that one of my favourite Hammer movies, Moon Zero Two (reviewed here), was released into cinemas the year after Kubrick’s seminal work of science fiction, 2001: A Space Odyssey. It helps one keep things in perspective.

However, this does have the effect, and I know I’m not the only person to feel this way about this particular volume, of diluting the actual emphasis on the Hammer content which the book is supposed to be about. I don’t know if the book had a specific page count limit it had to stay within but I would have liked a lot more detailed analysis of the experience of working on all these things than we have here. A chapter or two on each movie, along with notes about the way the actors interacted with the directors, more detailed history of the censor cuts required, set design information and a full coverage of the creation of the scores to each one would really not have gone down badly. I appreciate that this kind of detail takes a while to research and that, the older these films get, the less eye witnesses to the original events we have, but I really did feel a little short changed while I was reading this, it has to be said.

The structure of the book, where similar projects are lumped in together, rather than give you the chronological history of a specific series in context to the other Hammer titles in this volume, such as certain of their prehistoric and Quatermass movies, was a tad annoying, especially since the writer did such a good job contextualising everything else around these things so nicely. But... that’s an aesthetic decision and one which I am sure was made for good reasons.

Asides from that, though, you have to hand it to this writer for really knowing how to engage the reader’s interest and, also, hearty congratulations are due for not lumping the Hammer Frankenstein films in with the science fiction output like certain documentary pieces have over the years... presumably because the directors of these things don’t have enough faith in just the specific sci-fi and fantasy titles Hammer produced. That being said, another of my favourite Hammer films, Four Sided Triangle, is not that well emphasised in its being a kind of “dry run” for the Frankenstein series, although it does at least compare it to the original source novel of the film... but since I’ve never been a big fan of Hammer’s attempts to bring Mary Shelley’s classic creation to life, I’m not complaining about it too much.

The impression I get from having only a smattering of knowledge about Hammer, just enough from having seen a fair number of their movies and reading a few books on the subject, is that this book has been put together with the absolute novice in mind, as opposed to someone who already has an active interest in this particular branch of the Hammer Family Tree... however, bearing in mind the start of the Marketing conscious title (if you look in a proper dictionary which doesn’t include silly made up new-fangled words from the 20th Century and later, you’ll realise there’s no such thing as “cult” movies anyway), the supposed target audience is already going to be familiar with most of the information garnered in this book. So I did find myself developing a bit of a split personality while reading this one, it has to be said.

This is not a bad book by any means... but neither is it the kind of resource I suspect the target audience would have hoped for in this slim tome, it has to be said. Ultimately, if you know next to nothing about Hammer or are studying the films in this book for an academic subject, this will do fine and, like a lot of these kinds of books over the last few years, it’s still a pretty essential volume for fans to have on their bookshelves, until something more thorough comes along. Tim Lucas’ book on Mario Bava, All The Colours Of The Dark, was pretty exhaustive in it’s coverage of a specific subject and I think the industry can learn a lot from that specific book, truth be told. Still, British Cult Cinema: Hammer Fantasy & Sci Fi is a reasonably priced read which beginners can use as a starting block to expand their knowledge from... so that’s pretty good. One to be recommended.