Q (aka Q - The Winged Serpent) 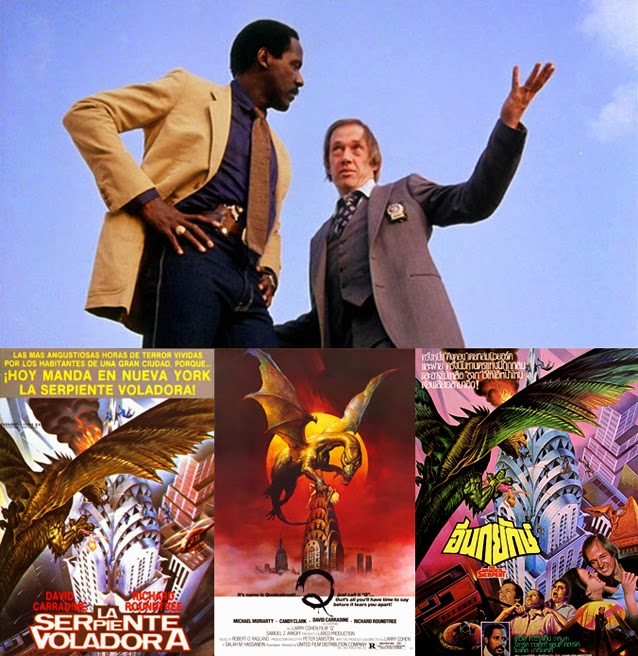 Well this is a curious little film I’ve just finally gotten around to seeing... after it being on my “to watch” list for a couple of decades. I was an admirer of this director’s famous “babies with teeth” trilogy It’s Alive, It Lives Again and It’s Alive III: Island Of The Alive which is, to be fair, equally confounding in its structure and tone. That trilogy was also a bit of a romp and I’m a sucker for those stop motion killer babies, even though they never look real (in much the same way that Ray Harryhausen’s creations never looked that real but you always made allowances because they were just so much gosh darned fun).

Q, for me, is a little bit more problematic.

It’s interesting because it starts with a flourish of brilliance in terms of the camerawork but, when the film starts proper, my first impulse was... “This is terrible.” However, it’s also quite compelling from a performance point of view and, coupled with the basic “1950s monster movie in 1980s clothes” appearance (or is that vice versa?), it makes for an uneven but never dull, treat.

The film opens with credits which are very clichéd in that they’re a roaming view of the streets of Manhattan from above... but then, as the credits finish, instead of just cutting to a new establishing shot, the camera kind of side-swipes left and we slam straight into a man on a rig cleaning windows on the side of a skyscraper. That was a pretty cool moment.  For me, that opening sleight of hand, which slightly shifts your perceptions of where the camera was filming from, is the most brilliant thing about this movie. As far as I’m concerned, it was all downhill from there but, like I said, it is kinda interesting.

The story, such as it is, starts off with a flying Aztecian serpent going around biting the heads off of random people, including the aforementioned window cleaner, who becomes a victim of its first “on screen” attack... although when I say “on screen”, the creature isn’t actually revealed in full until a little later. The film seems to be an “ahead of its time” homage to the 1950s monster movies which probably inspired it but, it’s not too long before the director is also revelling in the exploitation genre too, as we watch a toplesss and friskily endowed young lady sunbathing on top of her building and rubbing lotion onto herself... before she’s promptly chomped down as reptilian bird chow.

The story then changes tone and we get two things going on. On the one hand we have the introduction of David “Grasshopper” Carradine and Richard “Shaft” Roundtree as two detectives working the murders... which they will soon find is caused by Quetzlcoatl, the flying snake lizard thing. Simultaneously, we have an actor I’m really not that familiar with, called Michael Moriarty, who plays a small time, washed up crook. He messes up an audition playing piano which his girlfriend, played by Candy Clark, has fixed up for him. As a consequence of this, he is hired as a getaway driver on a diamond robbery but then gets roped in on the actual caper. Due to complications, he runs off by himself with the haul of diamonds (which he promptly loses when he gets hit by a car in busy traffic). When he runs from both the police and his fellow criminals, his fear and paranoia take him to the top of a skyscraper where he finds the nest and unhatched egg of the flying reptile... information which he keeps to himself.

From here on in, the different plot threads start coming together... kinda.

I don’t know. Although the film all makes sense, I did find it feeling like various scenes didn’t connect like they maybe should do... even though they clearly did. It might be because the film was shot very quickly... but it feels like, I don’t know how to say this properly so I’ll use an analogy. Remember those old polaroid cameras where you’d take a shot and the photograph would start developing when exposed to the air before your very eyes. Well this felt like that somewhat... but like you only got halfway through the developing process. You could see all of the picture but it looked kinda faded and only half glimpsed... somewhat. That’s how the movie “felt” to me.

The acting seems very naturalistic from both Moriarty and Carradine and I wouldn’t be surprised if a lot of that stuff turned out to be ad libbed while the cameras were rolling. In that way, the disjointed, fragmentary nature of the various character’s encounters, such as I perceived them, seems more Altmanesque, in some respects. Certainly, Moriarty and Carradine both put in amazing performances in this... it just didn’t quite feel like either of them were particularly relating much to other characters they encountered the way they should be. Roundtree is also, of course, excellent in this but he doesn’t get much air time.

The monster effects are a real throwback to low budget 1950s shenanigans and appear to be a combination of stop motion and puppetry. For most of the build up into the early parts of the story, the monster pretty much is not in shot when it strikes, and this is probably a wise move by Cohen so he doesn’t alienate his audience right from the outset, I suspect. There’s never really a moment in the film when you become scared by the antics of the title creature... least of all when its gulping down on unsuspecting extras or protagonists. Frankly, I didn’t really care or believe in any of the people in this film enough to worry if they came to a sticky end but there were some little moments which make the film worth a look sometime... asides from the excellent acting.

One of these is when we cut to a shot of a stray human leg fallen onto the streets as the crowd panics. I couldn’t help but snort in laughter and it’s one of the things that makes me think that Cohen is very much “in” on the joke in terms of the amount of parody and homage in the movie.

The other thing is a jump scare moment which, although I didn’t really register, I would imagine must have been a quite spectacular adrenalin rush moment when this was shown in cinemas in front of a large, paying audience who would be concentrating on the action. In this scene, Richard Roundtree is standing on the roof of a building and you are maybe expecting a monster to attack him... as it happens, I wasn’t, but I’m guessing that’s why this sequence and the one soon to follow (which I won’t talk about) play out the way they do. In this one though, a kite suddenly lands in Roundtree’s face from the side of the screen... must have been a pretty big jump moment in cinemas, I’ll bet.

Other than this though, I can’t say there’s much to recommend Q - The Winged Serpent... especially if you break it down into little bits like I just did. I know this movie has a very passionate and dedicated following of people but it seems I’m not one of them. It’s not a film I would highlight to most people but it is an interesting watch, perhaps, if you’re into acting as an art form in and of itself and/or interested in B movie monster homage. I’m certainly more in tune with the latter and I’m certainly glad I saw it... but I can’t imagine I’ll be revisiting it that often again in my life unless I need to hook back into it for research purposes. Still... really don’t take my word for it because I know some people out there love this movie... and you may be one of them.
Posted by NUTS4R2 at 19:06