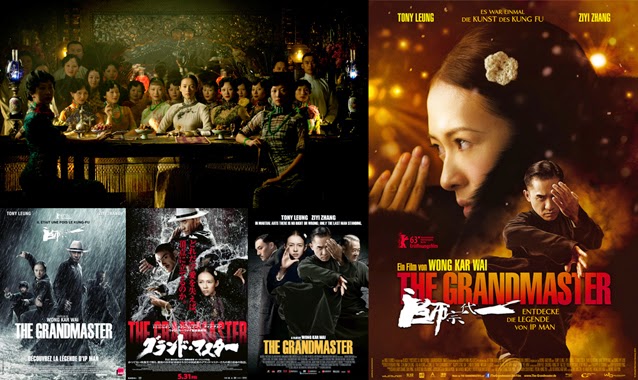 So here we have Wong Kar Wai’s new film, The Grandmaster, finally on a UK cinema release but in a heavily (by all reports) truncated version. Perhaps the reason the narrative kinda jumps around a little is because of the various cuts made to it... a film which the director apparently spent a year editing to get it how he wanted it in the first place.

The film tells the story of Ip Man, the Kung Fu Master responsible for popularising the Wing Chun style of fighting and also, of course, known as the man who originally trained the fighting and acting legend we know over here as Bruce Lee. So he’s a pretty important character and Wong Kar Wai obviously wanted to do the person justice... the film has been in various stages of production over the years, to the point that since this project was started, a few other Ip Man movies have already beaten this one out to release by a large chunk of time.

Now I’m already a little familiar with this director’s work on films such as ChungKing Express, 2046 (the sequel to his own I’m In The Mood For Love) and My Blueberry Nights (which I’m actually planning on rewatching and reviewing for the blog sometime next year) and so I was expecting to be watching a movie with absolutely mind blowing cinematography and a heavily saturated colour palette. Well, my expectations were half right... the camera work is really superb in that the slow progress of the camera through the compositions ensures that you get time to appreciate a lot of the beautifully balanced frames the director has concocted for this one. This time around, however, the colours seemed to be quite muted throughout a lot of it... but it really doesn’t matter as the shot design makes it very easy on the eye, in spite of this.

The title character is played by Tony Leung, who is a regular in a number of Wai’s movies and he plays the role here very confidently. However, just like a lot of made up heroic characters do, you really need a few more cracks in the whole “invincible hero” personae to make your characters interesting and, as this is based on real life, it looks like Ip Man didn’t really have any ostentations chinks in his armour so, consequently, the character does seem a tad dull at times.

This isn’t completely helped by the director’s very sedate approach to the mise en scene, it has to be said. Although you do have time to take in the beauty of the sets and landscapes, there are huge amounts of this film where nothing much happens. Now in some ways that’s a good thing because it throws the fastly edited (and sometimes slowed down) fight scenes into sharp relief and makes them more dramatic in contrast... but at the same time I found it to be maybe just a little bit lazy in terms of the scripting. I don’t know why, I usually love this kind of stuff, but the film certainly has a slowed down, almost voyeuristic quality in the way people and scenes are viewed, almost from a distance, without saying much. Normally a quality I embrace a lot more wholeheartedly.

It’s funny, it’s not like it’s a dialogue free movie, far from it. There’s a lot of talk all over it... but in between the talking and the action, the director likes to step back so you can, perhaps, ponder and consider things in your own time and, though I usually am very happy with that style of movie making, something felt a little odd and out of sorts with this one. I didn’t feel like I was getting a complete movie... partially, I guesss, due to the truncated version of the film playing over here and perhaps also because... I’m not sure the amount of material they could have filmed about this guy was interesting enough, maybe? That being said, however, they do start the movie when the central character is already 40 years old. The first four decades of Ip’s life are explained away as a "well off" man living off his family’s wealth and indulging himself in studies of kung fu. It seems very glossed over and I wonder how much of the excised footage included more of the back story for a few of the main protagonists in this one.

Another reason the film has a very voyeuristic feel, a least for me, is that the director treats his extras in a similar way to how Sergei Eisenstein used to do it in the era of Soviet Propaganda films like Battleship Potemkin, October and Strike. That is to say, Eisenstein would pick out a few of the background characters and then (often reshooting them slightly out of the scene in question) highlight them and their reaction to whatever is going on in a particular sequence at a closer distance. This way, the audience feels they are watching events unfold in front of them with a common point of reference as to the effect the main characters and events are having on everyone. Wong Kar Wai does a similar thing here, either by cutting to various bystanders in a crowded bar, for example, or moving the camera so that a “non-character” will suddenly be filling or dominating a composition. We see the smoke rising from a lady's cigarette and the expression on her face as she contemplates the rest of the scene, for instance. There seems to be a lot of that going on which helped create the sense of a silent and laid back space for the actors and stories to breathe in... which is a bit of a trade off in terms of detail versus, as I said earlier, a sense of dullness pervading certain of the scenes.

That being said, you aren’t going to be too bored for long because the shot design is exquisite and a lot of it will hold your interest throughout. The fight scenes alone are well worth the price of admission on this one and the choreographer, of Crouching Tiger, Hidden Dragon fame, and director take care to use natural elements and work with them, making the fights more interesting... such as shooting them in the pouring rain or during snowfall where the ground is a bit more beautiful and treacherous. However, the film doesn’t follow a formula of, "the further you go the bigger the fight", as it would do in a Western, formulaic brawl movie... in fact, the climactic fight scene in the film certainly isn’t trumpeted as such and doesn’t even feature the main protagonist the movie is about... Tony Leung is not even present during this sequence. Instead, it’s only after the film has finished during the last quarter of an hour or so, that you realise you were just watching the last big fight sequence of the movie.

The other thing I felt this film lacked to a certain degree was emotion. There is a beautiful fight scene between Tony Leung and Ziyi Zhang (of Crouching Tiger, Hidden Dragon, Hero, House Of Flying Daggers etc), playing his “almost love interest” Gong Er but, when the pay off to these sequences comes at the end of the movie, the emotional impact that they should have seemed maybe a little muted to me. It didn’t help, of course, that by that point in the movie the director elected to have music from Ennio Morricone’s score for Once Upon A Time In America playing through the scenes, so I was immediately popped out of the narrative while I was trying to identify the music. Even so, I suspect the toned down emotion of these final sequences maybe comes from a lack of the two characters full investment in each other, for reasons which are not made clear or glossed over in the narrative. Ip Man’s wife, not present for much of the narrative, presumably survived the war (unlike his daughters) and one wonders why he doesn’t try to get back to her at some point... love usually finds a way.

So, yeah, this is not the Wong Kar Wai I’ve known and loved over the years but, with all that being said, you’d be absolutely silly not to invest some time in this one because, frankly, even if he’s not dialled up to eleven here (which is, of course, only my opinion), he’s still delivered a beautifully haunting and, somewhat, melancholic cinematic poem in which many film lovers will find a lot to marvel at. Definitely something you should see before it leaves the cinema... unless, of course, you’re saving yourself for a good transfer of the full cut. The Grandmaster could well be a contender for part of my top 20 films this year and I’ll definitely be seeking out an alternate print of this one sometime soon.
Posted by NUTS4R2 at 20:11