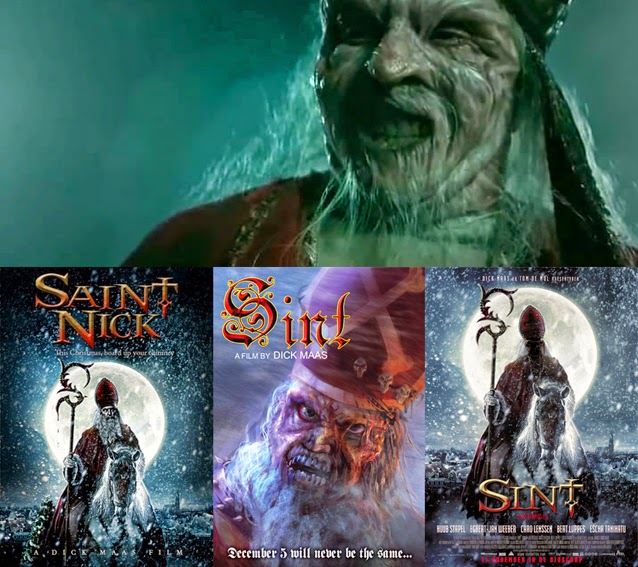 Warning: Very slight spoilers in this one.

It was due to the phenomenon known as Hypnogoria on Twitter that I first heard, maybe a year ago, about Sint. When he tweeted about the movie again this year, I realised this could be my Christmas movie to rival Rare Exports (reviewed here). Well, while it’s not as whimsical or compelling as Rare Exports in certain respects, it’s still a Christmas themed movie with a fairly dark edge to it and I was kinda pleased to be watching it, I have to say.

The plot involves the original St. Nicholas and his motley crew of pirates (?) who were burned in their ship by villagers for horrendous “rape and pillagey” crimes against them. However, there is a curse connected with this event and so, every 42 years, when the moon is full on December 5th, St. Nicholas, his helper Black Pete (a Dutch part of their Santa Claus myth, apparently), and their bunch of friends, return as ghostly/zombie versions of themselves and kill various people while stealing their children... plundering the infants and lugging them away, after their chimney penetrations, in big sacks.

This is exactly what happens in a scene we see set in 1968, when a whole family is wiped out in a gory and violent manner (which is pretty much the tone throughout the whole film) but with the boy in the family escaping through his absence of checking out the pigs in the family barn. We then cut to present day Amsterdam, where the rest of the action of this movie takes place, and the young boy is now an older police inspector, still embittered by his experiences as a child and thought a bit of a loony for his strange beliefs in a St. Nicholas killer.

We are slowly introduced to younger cast members whose job it is, mostly, to die in various violent scenes throughout the course of the film, along with various other, much less zombie fodder, people. The movie is all about a College aged teenager and his dealings with the Santa Claus zombie and how he pitches up in the company of the not-so-deranged Police Inspector, helping him out on his hunt to destroy the zombie St. Nicholas and his merry horde.

Which all sounds fantastic and, though not the most addictively watchable of movies, it does have a certain something to it... I think, especially in the pacing. This film moves incredibly fast. The speed is often because the action cross cuts between various incidents happening at the same time but mostly, I think, due to the enthusiastic rush of the camera work in some sequences. This is not a hand held, jerky shake-fest... which is a route a lot of horror movies seem to be going down just recently. Instead we have some very smooth and fluid camera work which tends to stick with a character and follow him/her for a bit, before cutting to the odd establishing shot which are often taken from an unexpected angle and compositional choice than what you may be expecting. In fact, the shot design gets downright Hitchcockian in some sequences, it has to be said.

It’s probably been noted before but the plot of the film bears more than a passing resemblance to John Carpenter’s beautiful horror movie The Fog (reviewed here) but, alas, the execution and the end game are not anything like that one. It does have a very 1980s feel to it, however, with lots of old school practical gore effects coming into their own as the St. Nicholas reincarnation slices and dices his way through various people... at least, they seemed less CGI orientated to me, at any rate. It also features an interesting car chase where some policemen chase St. Nicholas from ground level as he rides across the various rooftops of Amsterdam. This is almost a parody of the famous car chase sequence in The French Connection but, well, you know... with a zombie version of Santa on horseback, as opposed to the train tracks from the Friedkin classic.

The film is kinda curious in the end in that it doesn’t actually tie up all the loose ends in the story. For starters, we have no idea what has happened to the kids in the film and can only assume they’re gone for good. In addition to this, one of the more important main characters seems to be treated in a more haphazard and unsympathetic way than you would have hoped for by the end of the story. There’s also an issue, which I think a few people have picked up on by the looks of it, that some of the story flow doesn’t quite make sense in an annoying contradictory manner... almost like scenes of dialogue were kept in after other scenes which were referenced by them were deleted or, in some cases, rewritten without thinking about the plot consequences at other parts of the movie. Unfortunately, that is something which tends to happen a lot in modern movies so this is pretty much par for the course for a film of this nature but... still a little bit sloppy, I believe.

This is a short review, I know, but I have nothing much more to say about Sint other than I was really pleased to find a more deranged Christmas movie than the normal fair on offer ot me in my “film archive” and, if anything, this movie is quite a bit of fun which, when all is said an done, is probably as much as you can ask from a Christmas movie in this day and age. I can’t say it’s my favourite seasonal movie by a long chalk but it does entertain in a, kind of, comfortable way and it’s not something you have to think about too much if you just want to switch your brain off after the wine and pudding on Christmas Day. It’s not one I’d go out of my way to recommend but, equally, it’s one that I think a lot of horror afficionados would enjoy to a certain extent so, maybe if you are into festive fantoms and seasonal shocks, it’s something you might like to check out. Come on in... the weather outside is frightful.