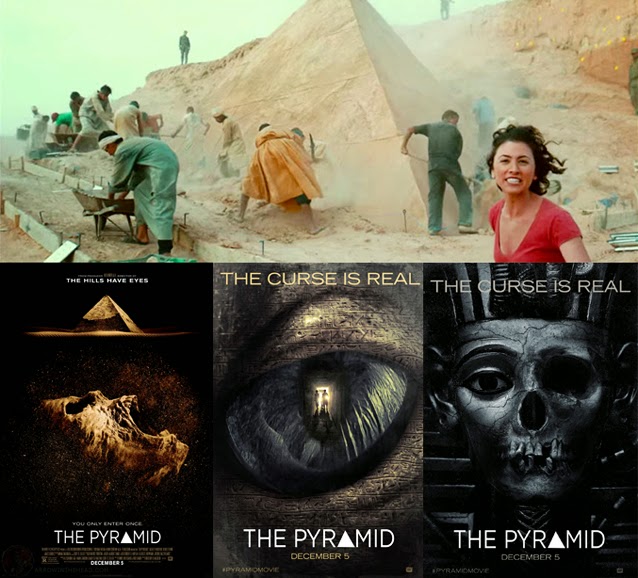 Warning: Very mild spoilers but...
not really all that spoilery, if truth be told.

Back in 1972, when I was a mere four years of age, my parents took me into London to the British Museum for a special exhibition. I remember queuing up for hours in the cold in the courtyard (as it was then) and it was my first experience of queuing in a line stretching and winding back on itself a seemingly infinite number of times. Queues this long were rarely seen in the 1970s, methinks. After queuing for a few hours, we gained entrance to the touring Treasures Of Tutankahmen exhibition which, it has to be said, was a much more specific and wonderous exhibition than the diluted one which showed up in London about 6 years ago.

It was here that my fascination with Egyptian archaeology first began... as it sparked a casual interest in the mysterious historical culture which I still have, somewhat, to this day. This was further enhanced, at around the same time, by my first TV viewing of the original Boris Karloff version of The Mummy and, later, by both  the Tintin comic album Cigars Of The Pharaohs and a particular issue of the black and white Doc Savage comic which featured characters like Anubis and Horus running around and generally giving The Man Of Bronze a hard time.

Perhaps this is why I responded so well to the new horror movie The Pyramid when, it would seem, it’s been really panned by a lot of critics. However, a lot of the views I’ve seen expressed on it also describe it as a found footage movie... and it so isn’t. I’ll get back to that point in a minute but, first, let me tell you the basic set up of the movie.

The time is 2013. A father and daughter team of archeologists have discovered a new pyramid beneath the sand in an increasingly volatile Egypt. The apex is uncovered and the daughter doesn’t believe it’s the tomb of Akhenaten, which is what they had originally been looking for. Also, curiously, it’s a three sided pyramid, as opposed to the usual four sided pyramids you get in Egypt. So curiouser and curiouser. A two person documentary team are filming these intrepid, historical explorers and we then have the usual thing you often see when anyone opens a pyramid in a horror movie... the person opening it gets hit with toxic, gaseous spray which plays havoc with his nervous system and pretty much kills him. Yeah, this is just one cliché in a phenomenally cliché ridden film, it has to be said... but it does have other things going for it.

The main protagonists and their “documenters” are about to enter the tomb when the American government orders everyone to evacuate the area because of the mounting, violent political situation but, with only a few hours left before their “get out and go” deadline, the team decides to send in the cute robot camera machine of the daughter’s geeky boyfriend, on loan from NASA, to get a little look inside this rare find. This is when you expect things are going to go really wrong and when the camera is smashed and dragged further into the pyramid by what our team of scientific geniuses assume is a dog (yeah, right), they all go in and look for the camera equipment and get trapped inside the pyramid with a bunch of jackal-like, violent creatures and... a big as f*** version of Anubis who is pretty scary and wants to rip everyone’s heart out... before weighing it and devouring their soul.

Now there are some issues here with this film, to be sure, but for all the standard horror clichés which pop up in abundance during the running time, not to mention some of the awful dialogue, the film still manages to retain a certain “edge of your seat” sense of foreboding and, by the end of the flick, it does indeed get downright harrowing and terrifying... at least to this audience member. Which is a good thing, right? It’s like the people behind the direction, editing, lighting, set design, effects work and the level of credibility invoked by the lead actors are all working overtime to try to distract us from the plot and dialogue and a big round of applause is deserved for everyone managing to create something still quite credibly scary while using this screenplay as a starting out point.

The issue surrounding the misconception that the film is one of the many found footage horror films which have been inundating us with much more frequency for the last decade or so is easily understandable, in some ways, for those who really aren’t paying attention to the way in which the film is shot and instead are immersing themselves in the content of the fantasy. However, the opening establishing shots should have been a dead giveaway and, although a lot of the footage in the film is from a specific camera source, such as the documentary film-maker’s camera or the screen of the robot they initially send into the tomb to take a look around, there is a lot of stuff which is third person camerawork and encompasses everyone who could be a credible source in shot. And if all that doesn’t give it away that this is definitely a mixture of both, then Nima Fakhrara's nicely done underscore for the film should probably put paid to any idea that the film-makers are going for a more authentic route in terms of first person shooting.

So, yeah, the director and producers have obviously made the decision, somewhere down the line in pre-production, that they didn’t want to limit themselves to just the usual tools of the trade when it comes to a “found footage” style movie and gone for the best of both worlds. The only fly in the ointment in this particular approach, though, is that even the standard third person view shots are all done on handheld too. There’s a lot of camera shake and so, other than the lack of an identifiable source for those shots, they are almost indistinguishable from the first person footage unless you are really paying attention. Which is fine but, then you wonder, if they were going to make it that indistinguishable in the first place, why bother making parts of it first person at all? The documentary team could easily have fulfilled their “exposition monkey” roles by being students on work experience or some such and then there would be no need for them to be lugging stuff around and paying attention to the minutia of all that it entails, taking up time in the main narrative. So that’s a little puzzling, it has to be said.

Still, asides from these kinds of issues, the film is a real blast when it comes to suspense and even gets into the realms of having a good, strong gore element in it (like, for instance, the zombie movies of the early to mid 1980s) and I really appreciated this. In terms of structure it’s pretty much the same kind of film as the excellent As Above, So Below from a few months ago (and reviewed here) but it trades in the beautiful atmosphere of that film with a more gung ho approach to the horror of the situations. Personally I preferred the atmosphere of As Above, So Below a little more but I did appreciate the differences between them too and The Pyramid is a really nice little horror film as far as I’m concerned.

The performances by the likes of Ashley Hinshaw, Denis O'Hare, James Buckley, Christa Nicola, Amir K and Faycal Attougui are all top notch, in spite of some of the terrible dialogue they have to say, with performances somewhat modified in terms of emotional impact of the events in real life to move the story forward and allow for the basic human survival instinct to take over, it seems to me. That is to say, the characters don’t completely fall apart when a real life person faced by the same challenges might just freeze up (and die) under the circumstances and the actors do a credible job of helping you suspend your disbelief in these sequences.

The main star of the thing is Anubis, however, who is absolutely terrifying. It’s funny, but when you see CGI effects combined with a hand held camera, they seem much more credible than the CGI work in films shot with a steadicam (for example) and the version of Anubis created for this film, who does some really nicely violent stuff, is very impressive indeed.

All in all then, despite its shortcomings (and there are a few), director Grégory Levasseur has managed to put together a really credible entry into the horror genre and, although it seems to have been quite brutally rejected by a number of reviewers, I’m proud to stand up to be counted and say that The Pyramid is a slice of B-movie Egyptsploitation that I am happy to recommend to anyone... and I will happily pick up a blu ray of it when the price comes down after its initial release. Now if only someone would release the score to this one on CD, I’d be much happier about it.
Posted by NUTS4R2 at 20:21