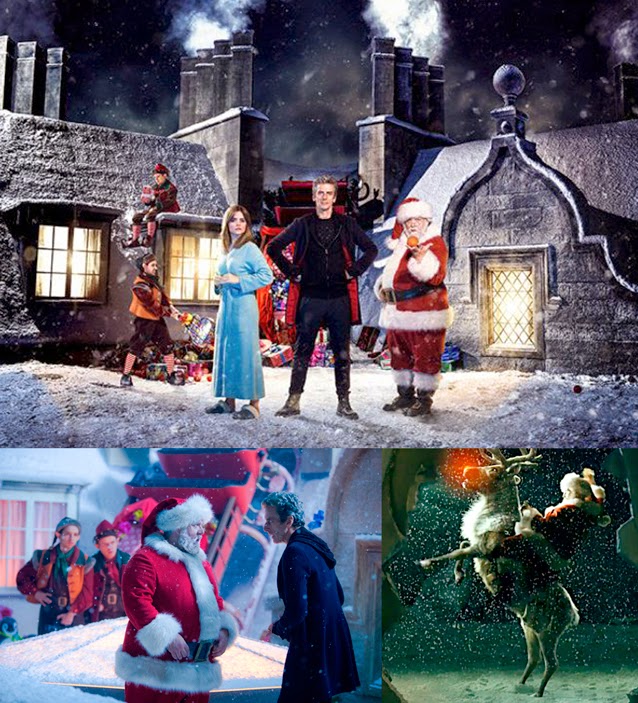 Warning: Some spoilerage, I guess... although it was an extremely predictable episode, so I don’t see how I could really spoil it too much.

This is apparently the tenth Christmas Special since Doctor Who returned to our screens in 2005. Now, it has to be said, no matter how good or bad a particular series of the show is, the Christmas specials are usually pretty good... the exceptions being, for me, the last of the David Tennant Christmas transmissions (and his New Year’s Eve one which finished that particular story and brought his reign as The Doctor to a close) and last year’s The Time Of The Doctor (reviewed here).

So, yeah, unfortunately they can’t all be good but, I’d have to say, this years festive offering wasn’t nearly as bad as those two, although it would probably be third from the bottom on my personal list of Doctor Who yuletide treats. In all honesty, last night’s story (which I’ve only just seen an hour or so ago before I started writing this) was not a terrible Doctor Who episode. Alas, it also didn’t tick many of the right boxes either and was maybe a bit more miss than it was hit, for a lot of reasons.

There was, however, some pretty good stuff in the episode in terms of the special effects... which really did kinda hold up this time around. Which was a bit of a surprise because the creature effects and flying sequences (involving Santa’s sleigh pulled by reindeer) were quite ambitious but, even so, the special effects team managed to pull it off. More importantly, the performances by all the actors in this one, including Nick Frost as Santa Claus, were pretty amazing and they had some good dialogue to burn through as they got on with this rather energetic but, ultimately, pointless story.

Now, to take that further, one of my problems with the Capaldi stories so far is that he’s had some absolutely cracking dialogue to work with, as he and his fellow performers have in this one, but the stories have been mostly weak and predictable at best. Alas, I think Last Christmas just goes to support that view of things because, although the situations the main characters find themselves in are quite justified via the story in their derivation from other, more famous, science fiction phenomenon... the whole basic plot concept is one that you’ve seen done a gazillion and one times before, even on Doctor Who. That is to say...

It’s the old “dream within a dream” plot and when the cutaway to the first rescue by Santa comes, when our hero and his new companions find themselves in extreme danger, it’s pretty obvious by that point what’s really going on. The editing doesn’t lie to us about this... it just tries to blind you with it’s speed when you hopefully don’t notice that the shots didn’t match (which I have to say... I did). To further compound the folly of this course of action, writer Steven Moffat then deliberately tries to misdirect the audience by showing us an all to obvious fabrication of reality (using Danny Pink, of course, lest we forget... and I won’t, I’ll get to him later). The idea being that if we latch onto something which is obviously a fake, it will trick us into thinking the external frame of that literary device is a fake too but, alas, this one wasn’t skillfully enough written (or possibly it was and it was just badly directed or edited... not sure which, if any) to fool pretty much anyone and, by the end of the day, I was wondering why Moffat kept going with this stuff because, frankly, the whole Russian dolls plot within a plot felt like a bit of a waste of time.

The correct response to all this, I guess, is that this episode is supposed to be a festive piece of fluff and I guess, in some ways, if that’s what you choose to do with your Christmas special then that’s your look out. I did feel, though, that the episode was blindingly obvious and that Peter Capaldi (not to mention Jenna Coleman), deserved better than this. The only thing it does is to reunite The Doctor and Clara as main protagonist and companion again, as a quick fix for the appalling end to the last series which, if you think about it, had already begun this particular plot when Santa Claus arrived on the TARDIS.

Unfortunately, while this was all very nice and non-offensive and “safe”, I was a little annoyed that it didn’t, in any way shape or form, try to address the main elephant in the room of the previous series... Danny Pink. Basically, the time line on which The Doctor and Clara are currently travelling is such that they have both met the great, great, however many generations back, grandson of Danny Pink and Clara... since Clara isn’t pregnant with Danny’s child as yet, this still needs to happen. So either Danny Pink has to return, quite spectacularly I should say, from the dead or... and this one wouldn’t surprise me either, to be honest... Steven Moffat has left another big clunker of a plot hole which he can’t go back and resolve in a way that makes any sense within the universe of The Doctor.

And that’s really all I have to say about this particular episode, except to maybe mention that Murray Gold knocked it out of the universe again with a suitably appropriate and exciting orchestral accompaniament to the episode. However, while I kinda enjoyed this installment to a certain degree, I guess, this is really not a very good Doctor Who Christmas Special I’m afraid. For me, The Doctor, The Widow and The Wardrobe (reviewed here) is still the greatest of the show’s Christmas themed episodes, for my money. This one is enjoyable enough, if you take it for what it is, but approach with caution because it’s a little like a rerun, in some ways, of the early Matt Smith episode Amy’s Choice (reviewed here) and, since the main “culprit” in that story served a similar function to the “dream crabs” in this episode, I’m surprised the writer didn’t just put Toby Jones' character back into the story. So don’t expect too much from this one, I’m afraid.
Posted by NUTS4R2 at 17:12