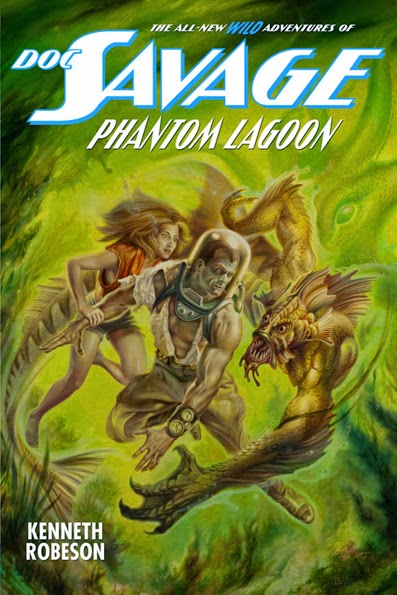 You know, it must be really hard to, not only write a continuation of the exploits of an already famous literary character, but to write it in the style and spirit of the original author. It’s a neat trick if you can pull it off and, while I found a few of the latest batch of modern Doc Savage novels to be a little out of kilter with their 20th Century counterparts, I have to hand it to Murray and say that they are definitely more hit than miss and, even on the occasions when they do miss the mark a little in terms of authenticity of the characters and styles of situations in comparison to the original versions, they are nearly always entertaining.

One thing Murray definitely pulls off in his Doc Savage novels is the breakneck pacing which was often an obvious stylistic flourish of the pulps, especially within the work of Lester Dent (the original Kenneth Robeson) and his Doc Savage tales. However, I have to further congratulate Murray in that, with Phantom Lagoon, he also manages to not only get all the ingredients of a classic Doc Savage novel just about absolutely right, he also manages to push the edges a little bit in terms of some of the events which happen in this one (I don’t want to get too spoilery here) and you know that Dent would surely have approved of these exciting dramatic decisions. They are absolutely in the style of what Dent would have done... and he did sometimes stretch his own formula himself, on occasion, just to shake things up.

The events I am talking about in this particular volume are those kinds of incidents which threaten to somehow change the status quo of the tried and true formula of any future Doc Savage novels. They rarely do have any permanent after effects which last them for longer than the opening set up of the next novel, after the events have occurred in the previous story, but they are quite drastic alterations for the duration of the tale. Of course, with a character like Doc Savage, who has an unlimited reserve of money he can call on to fund his work at any time, it’s rare for anything really groundshaking to be irreparable, but certain “big things” often are written in such a way that they certainly seem like massive events at the time... again, without giving away spoilers here, it’s hard to go into.

Suffice it so say that there are some scenes of destruction and devastation which have an effect on the possible future of the narrative and also, of course, add to the dramatic impact and gravitas of the latest caper that Doc and his crew end up investigating. Now, it’s possible Murray may have decided to do what he’s done here to tie into a drop off in certain ingredients in the later World War 2 and post World War Doc Savage tales. I can’t quite remember (or find online now, either) specifics of just where Doc was at with various locations and equipment at certain stages of his crime fighting career, but I trust Murray enough to know that he wouldn’t be one to threaten the continuity of the chronological setting where this novel gets tucked into the original stories. And, like I said, the events portrayed in this novel are, as far as I’m concerned, things Lester Dent would have approved of himself.

For instance, the original Doc Savage story Fortress Of Solitude tale features an outrageous attack on Doc’s arctic retreat which would seem to have long reaching effects on the series (Murray even picks up some threads from this story himself in at least one of his previous Doc novels) but, ultimately, equilibrium is restored. Similarly, when people break out from Doc’s famous Crime College or the Mayans are embroiled in a plot, or even when various devastating attacks on Doc’s skyscraper headquarters have taken place in the past, they are really examples of Dent just having his cake and eating it at the same time. Big, dramatic events that are a threat to the easy, continued lifestyle of Doc and his crew are ultimately reversed and swept under the carpet with a quick sleight of hand... and it always works and makes sense within the realms of the fictional character because, after all... money talks.

So no worries on some of the incidents in this particular novel that might seem a tad overcooked or sensational to some readers. As far as I’m concerned, these are all valid approaches to the drama. No complaints here.

As for the rest of the novel?

Well, it’s a real humdinger of a tale, for sure. Starting out by almost immediately putting Doc and his crew in a reactive stance rather than being in an investigation they have chosen to take part in from the outset. It deals with watery backdrops and sea creatures who won’t rub up any of the traditional Doc Savage fans the wrong way... this novel sticks to the formula of always having a hard, scientific reason for the initial hook of the weird phenomenom that Doc encounters in his adventures. As with all of the writing I’ve read by Will Murray, it moves at a mile a minute, is stupendously well written and, like the majority of his other efforts under the Kenneth Robeson “brand name”... hugely entertaining.

If i had one criticism to make on this one, it’s the transparency of the misdirection Murray uses in a certain scene. A character drops into the narrative about a third of the way into the novel and my initial thoughts were, since I know both Murray and Dent’s plotting fairly well, that a very specific character was adopting a disguise. Then, to muddy the waters, Murray has one of the villains of the piece already wise to these kinds of shenanigans and clearly naming one of The Amazing Five as the person adopting the disguise. This would have maybe thrown first time readers off the track a little but, pretty much any fan of the exploits of Clark Savage Jr would be pretty sure of the real identity of the character in question, I would imagine. It’s not really a problem though... just a personal reaction to what I see as an obvious red herring for the reader.

Doc Savage: Phantom Lagoon is a pretty solid entry into the series of additional “Wild Adventures Of Doc Savage” and the sophisticated degree to which Murray is able to effectively “do a Robeson” never ceases to amaze me. Added to this we have “the war in Europe” which sets up slightly different rules that Doc and his crew can operate under... also an interesting addition to the atmosphere on this one. This is a definite good read for all fans of The Man Of Bronze and I would definitely urge those who have been sitting on the fence with the latest batch of novels to go out and grab a couple... and you could certainly use this one as a jumping on point. Although two of Doc’s crew are missing, you have the counter balance of his cousin Pat added into the mix so that’s a good bonus and, if I remember rightly, Doc’s aides did start slowly disappearing as the novels progressed towards the end of the series, with characters being whittled down until it was just Monk and Ham in on the adventures as the characters came towards the end of their original run... so once again, Murray’s adds another shot of authenticity into his work, by making sure the ingredients he puts into his verbose concoction are more specific to where this one fits into the chronology of the original pulps. Looking forward to catching up to the next two in the series as soon as I can. Hopefully over Christmas if Santa brings the next new volume in his sack.
Posted by NUTS4R2 at 19:56