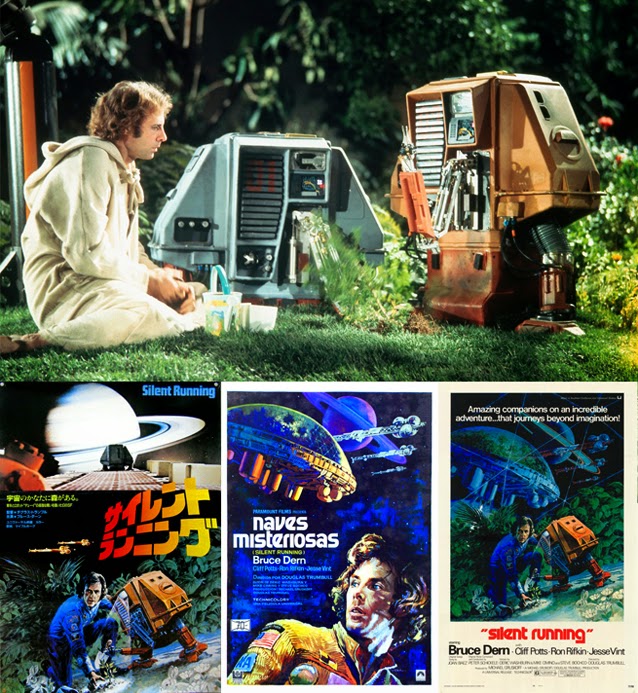 Silent Running is a film I hadn’t seen in a long time. It’s a film which was always a big hit in the playground chatter at school and I guess I would have been about 7 or 8 years old when it got its first TV screening in the UK. I remember watching it with my dad and lapping it up. I also remember the very sad ending and the “green is good” message that made us all cry back in the day. And the three robots, of course... I’ll come back to them a little later.

Although I’ve always held this movie in very high regard, it wasn’t a movie that I was really expecting to revisit anytime soon until a fellow student from my old graphic design course at the London College Of Printing found me on Twitter and, after reading a few of my reviews and having a few conversations, expressed an interest in hearing what I would have to say about this classic movie these days. So here I am and that’s a big shout out to Jez at Fizog Design (follow him on Twitter here) for getting me back to looking at this film again after so many decades.

Silent Running belongs as a kind of softer option alternative to the big powerful wave of brutal and philosophical sci-fi movies which Hollywood were churning out, such as those top lining actors like Charlton Heston and Yul Brinner, who were getting a new lease of life on the big screen with such classics as Planet Of The Apes, The Omega Man, Soylent Green, Westworld and The Ultimate Warrior. The film is directed by Douglas Trumbull, who is perhaps much better known as a special effects wizard and who had just come off of doing the effects work on Stanley Kubrick’s 2001: A Space Odyssey. When I mention that he contributed to the effects work for both that film and such classics as The Andromeda Strain, Close Encounters Of The Third Kind, Star Trek The Motion Picture and Blade Runner, not to mention another film he directed called Brainstorm, then you’ll realise that he was quite a giant of a man in his chosen field.

This film is unique because it takes a traditional hippy approach to man’s decimation of our planet and, like all good science fiction, pushes it and filters it through a sci-fi concept to explore it in a more direct way. Man has used up a lot of his natural resources on earth to the extent that the last forests, filled as they are with trees, plants, rabbits, toads, snails and all manner of wildlife, have been bundled off into space, three a piece, on huge freighters under big domes which protect them in the hopes that mankind can one day bring them back to Earth. When a decision is made to destroy the domes and recall all of the crews of the freighters back to Earth, the chief “gardener” of the starship “Valley Forge”, who has been tending and growing the forests for something like 20 years, takes offence at the idea... he murders his three colleagues and manages to keep one of the domes, faking his misdeeds and feigning death by navigating a path through the rings of Saturn... in a special effects sequence that very much calls into mind the last act of 2001: A Space Odyssey and which, it may come as no surprise, was originally intended to be included as a sequence in Kubrick’s movie.

The gardner, known as Lowell, is played by a young Bruce Dern and I think this was the first time I’d been aware of him as an actor as far as I can remember, although I would have certainly seen him in various American Westerns over the years before I saw this movie, I suspect. Once he’s killed off his crew in the first third of this story, after all the rules and ideas of the reality in which Lowell lives have been explored and established to build up a picture of the situation in the audience’s mind, the film becomes essentially a one hander showcase for Dern as he plays along side two of three drone robots which he calls Huey and Dewey (with Louis being named posthumously after it fails to survive the earlier sequences of the film).

In my review a short while ago for Interstellar (found here) I likened the robots in that movie to the classic robots of past science fiction films and specifically named the robots in this film, who they most resemble in some ways, in terms of the simplicity of their design. The three drones here are basically walking boxes with two legs and appendages which can come out of the front, robotically, so they can do things like hold cards when Lowell teaches them how to play at poker (a game in which Huey and Dewey cheat, although Lowell never really spots this). The drones are played by multiple amputee actors and it’s a real wonder how these, frankly simplistic designs, can suddenly become imbued with all the emotional warmth of humans as they perform and complete certain tasks, above and beyond their programming. Of course, a lot of this is due to the mental baggage that the audience brings to the table but Dern plays on the perception behind the action and reaction shenanigans to enhance this emotional depth in the robots and it’s a testament to his acting, and to the movements and gestures of those inside the droids themselves, at just how involved you get with them to the point where you are feeling really sorry for them as the film reaches its final solution, when Earth ships have found the Valley Forge and Lowell has to make one final decision to both save the forest and fix it so the forest is not pursued and destroyed.

It’s a tear jerker, to be sure, although I surprised myself by being less emotionally attached to the corker of a “save our forests” message inherent in the main text of the movie this time around. I think some of it has to do with the fact that, despite getting a lot of things absolutely right in this film, it’s getting just a little bit dated, truth be told. However, that being said, I think its the kind of film you have a much better response to when you’re young and can’t necessarily see all the shades of grey lurking around the edges of what is, after all, a very simple and clear message... boosted as it is by a score by composer Peter Schickele (aka P. D. Q. Bach) and with his songs for the movie being performed by Joan Baez. Actually, I can’t believe the soundtrack to this one has still not been issued on CD after all these years... I’m guessing there are some legal issues standing in the way with the publishing of the songs somewhere but I remain hopeful that it’ll someday get a release... preferably before I die (better get your skates on then, assorted record labels).

At the end of the day, though, I still thoroughly enjoyed what has since become, and rightly so, a genuine classic of 1970s science fiction. If you’ve never seen this movie and are a fan of the genre then you really do need to take a look at it, preferably before your heart gets too old and jaded to consider the central message in a less cynical way. The newish limited edition Blu Ray print on Eureka's The Masters Of Cinema label is pretty good and has a variety of extras including a commentary track by Trumbull and Dern which is definitely something I have to give a listen to in the near future. Still a strong movie after all these years and a film that, once seen, you’ll never really forget. It’s one of those movies that stays with you through the years and, if you can inhabit the wide open eyed hope of its central theme, then you’ll have a really great time with it, I think.
Posted by NUTS4R2 at 20:00