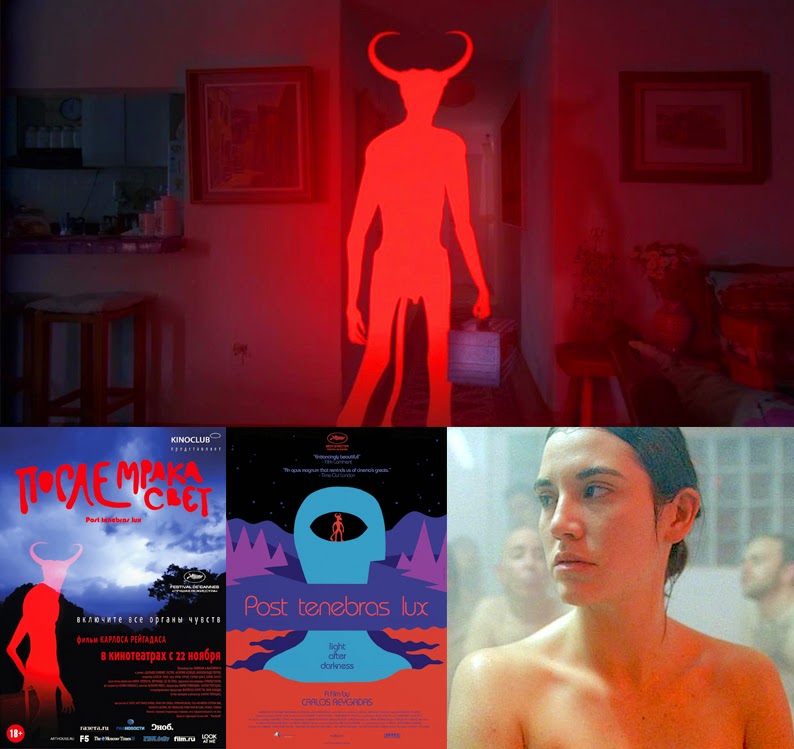 Post Tenebras Lux is not a movie I’d heard of until I caught it out the corner of my eye as part of an ongoing sales promotion in Fopp, where they were selling the Blu-Ray for about a fiver. The attractive cover design and title caught my eye but I was in a hurry and so I left it. However, it haunted me from the shelf every week I returned to Fopp and, one day, I went to buy it but was put off by the awful write up on the back cover. It did, indeed, sound like one of the dullest movies out there.

It was only, after about eight weeks of hemming and hawing at the title, that I got around to searching for the trailer on the internet and that’s when I realised that, after all, it was a film I should probably take a look at. So, not to be put off by the blurb on the back cover this time, which seemed to be designed to keep as many people from purchasing said item as possible, I returned to Fopp a week later and made my purchase. I’m really glad I did, as it happens.

Post Tenebras Lux is a film full of cruelty and misery with, despite the title, very little in the way of lightness that I could, myself, get my head around. The entire film is shot in an old 1.33:1 (aka 4:3) aspect ratio and it’s done so with an extremely annoying lens which seems to be there specifically to distort the picture. The sides, top and bottom of the main view is always presenting a ghosted, doubled or sometimes trebled image of what is being observed and, although this smacks of the ambitions of the introduction of a Godardian distancing technique, it thankfully doesn’t stop you from slipping into the action of the movie, the content of which is said to be semi-autobiographical, drawing from Carlos Reygadas own experiences.

I’d seen this director’s famous movie Battle In Heaven on its first run at the cinemas back in 2005 and had liked it well enough, though not enough to watch a second time. Post Tenebras Lux is a film that, I must say, I found both more accessible and something which I found held my interest over the entire length of the running time, although it has to be said that very few of the adult characters are in any way sympathetic or people you would want to know in real life... except maybe for Natalia, played so well by actress Nathalia Acevedo. This empathy does not extend to her husband Juan, played equally brilliantly by Adolfo Jiménez Castro in his first film. After we see him badly beat up his favourite dog and witness the privileged attitudes he displays to his employees, it’s hard to feel much sympathy for him... until you juxtapose his character with others in the film and realise that, after all, he is actually at least attempting to be critical of himself and trying to move towards some kind of awareness and redemption for his sins throughout the movie.

The film starts off with a very potent series of tracking shots of a young girl of a few years in age, lost in a field with dogs, cows, bulls and horses. It is only later that we realise that this was a dream in the head of the daughter of the two main protagonists, Natalie and Juan, and that the director using the same lens and no distinction between the style of the shots means that it’s very hard to distinguish between dream and reality in this movie and, though I personally took everything else thrown at me as a part of the reality of the characters, I’m sure there are certain moments that some viewers will choose to see as a dream state because they depict things which can’t be seen in our reality. Perhaps the strength of using the specific, distorting lens that the director employs throughout the movie is that it makes everything real to the camera and doesn’t allow the standard cinematic syntax of dreams to get in the way of the illusion of a very specific reality.

There are three sequences which really stood out in my mind as being something which was well worth the price of admission, and certainly worth the five or six pounds that Fopp charged me for the blu ray. The first of these is an early sequence featuring an animated devil carrying a suitcase. The metaphor that he is at his work and meddling in the affairs of man, makes more sense, perhaps, when we flash back to the same sequence at the end, almost as if the director is addressing the audience and saying that the world is always going to be terrible but it’s demonic intervention that is the cause.

The ultimate tragedy of Juan's personal expression of Post Tenebras Lux seems almost anticlimactic as he waxes lyrical from what may, ultimately, prove to be his death bed. However, there is a death scene for one of the characters at the end of the film which is quite an eye opener and which both welcomes and simultaneously rejects the attitude that there is a dream state at play in the movie. The scene is of note, not because of the specific style of violent death on display here (which is a dime a dozen in terms of cinematic deaths) but because of the way this specific brand of death is achieved and the identity of the person doing it. It makes it pretty much unique in the history of cinema, as far as I am aware of it (and please somebody leave a comment if you know of a specific film where this happens in commercial cinema) and the aftermath lingers in your mind, accompanied as it is by a violent change in the weather which washes away some of the bloody aftermath in a deluge of stormy rain.

These things are enough to recommend the movie to most cine-literate people, I suspect, but I’ll just add in that the film is also quite challenging because of the insistence of the director to occasionally intercut scenes of an English high school rugby game at certain points, which seem a complete non sequitur in terms of the narrative flow of the movie and which makes the whole experience both less penetrable and, as a result of that, doubly intriguing. I’m really glad I picked this one up and am going to be sharing this with a few friends who are avid film devotees at some point soon. Definitely one to take a look at if you are in the mood for something which is, being quite frank about it, not a passive watch.
Posted by NUTS4R2 at 20:17