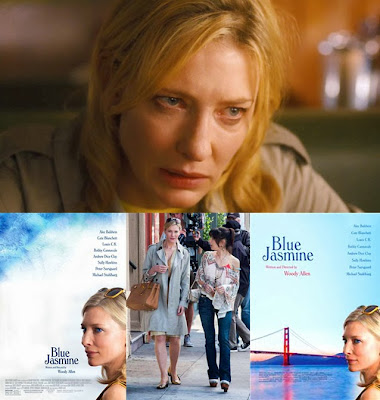 I‘ve been a Woody Allen fan for a long time now. Ever since I was about 8 years old, back in 1976, after seeing one of his movies on late night TV. I’ll always remember the comment made by a good friend after we left a screening of Allen’s Shadows And Fog, his souped up reworking of his stage play Death, which we saw at a late night showing at the Lumiere cinema in London... now sadly gone. My friend said, on leaving, something along the lines of... “Wow. That was just Woody Allen flexing his muscles. Showing people he can make movies better than any of them.” I didn’t disagree and it’s a moment I’ll treasure because of my friend’s reaction, but I will say that, as the years have worn on, I have found Allen to be a little hit and miss... especially in the last two decades.

If Shadows And Fog was Woody Allen flexing his muscles, though, then I have to say I found his new film, Blue Jasmine, to be Woody Allen sitting back and relaxing on a sofa, watching the world go by and just bringing out the usual stuff. This is not to say it’s in any way a bad movie. It isn’t. But I don’t find it to be the revelation that a lot of people seem to be finding this one to be either. I find it strange that people are picking on this movie to lionise when it seems to me to be... not so much unremarkable but certainly less interesting than some of the work he’s been doing lately.

This film stars two of my favourite actresses - Cate Blanchett and Sally Hawkins.

That Cate Blanchett has been singled out for praise and made a fuss over for this particular movie is something I also find quite strange. That she’s one of the most incredible actresses of her generation is not to be denied. Nor is the fact that she can do the brilliant performance she gives in this film in her sleep because she really is that good. She’s worked with some of the greatest directors and turned in some of the most interesting performances going. She’s worked with Jim Jarmusch, Wes Anderson, Lasse Hallström, Tom Tykwer... even Steven Spielberg. Why she’s getting singled out just for this role at the moment is beyond me. But still, she does it really well, as expected, so I certainly don’t begrudge her the attention she’s getting. I think she’s fantastic.

Sally Hawkins is kinda interesting in this film because the very first scene she’s in she is totally transformed both in looks and in tone of delivery. But then, as the story progresses, she quickly seems to revert to something more bubbly and Sally Hawkins like... which is fine, I like bubbly Sally Hawkins. But it’s like somebody forgot to reshoot the first couple of scenes to match the acting style and tone of the rest of her performance. I felt that a bit disconcerting.

All in all, though, all the acting in this film is superb... well you’re really not going to go wrong with a cast like this. And Blanchett’s performance of Allen’s Jasmine is certainly more compelling the more you see of her. As we see this woman getting bad breaks after a life of wealth and not working, we are interested in her madness and the impending breakdown that we can see coming from afar. From any other actress this would be incredible but I guess I’m expecting something more challenging... which is wrong, I know. Why should I expect actors to be challenged? And, to be fair, I’m sure this was a very demanding role actually. Seriously, that Blanchett can carry off this stuff with that amount of ease is no surprise.

Maybe my dissatisfaction comes not from the acting but from the general tone and writing of the piece. Allen has done serious works before and this one is certainly a straight piece (although the audience I was with seemed to be programmed to laugh at any slight character quirk because, I assume, they went to see a Woody Allen movie and were therefore expecting to laugh). I just think it’s a pretty slight piece too, especially when we’ve been getting such strong stuff from my childhood hero just recently (see my reviews of Midnight In Paris and To Rome With Love).

The film is cleanly shot in Woody’s usual, uncluttered style and the structure of the writing, as Jasmine hovers in and out of flashbacks from her life, which slowly fill us in on the tragedy of her past, and the way in which Allen chooses to present this, without fanfare on screen did, I have to confess, remind me of Ingmar Bergman and the fact that Allen was constantly getting compared to that great director’s work in his early career. Indeed, if truth be told, I would much rather be watching Allen’s early and much Bergmanised straight movie Interiors to this one. That’s always been one of my favourites though. I don’t think Blue Jasmine is comparable to some of those earlier works if I’m being honest.

All that being said, though, it’s not a terrible movie and certainly something the majority of Woody Allen fans will want to take a look at, I think. He doesn’t hit any wrong notes and the central characters of Jasmine and her adopted sister Ginger (Sally Hawkins) are watchable and compelling enough to hold your attention. So I would still recommend it and it still blows away most of the other stuff at the cinema at the moment. It’s not exactly his best film but, heck, it doesn’t have to be. And I’m glad he’s got a hit out of it.