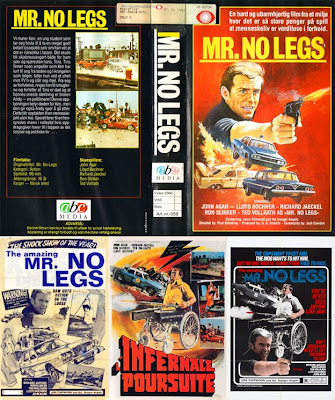 I Am Leg End

Warning: Seriously! You care about spoilers on this?
Are you ever gonna watch it?

I went out of my way to turn up a copy of this movie to be able to review it for you here... and almost wish I hadn’t.

Okay... so this appears to be directed by Ricou Browning, who some of my regular readers will recognise as being one of the two primary 'actors' in the gill-man costume in Universal’s iconic Creature From The Black Lagoon trilogy. It’s interesting, though, that if you follow the link from this movie into the IMDB entry for the man himself, you will not see this film listed there as being something he has directed. I suspect he wanted to get this one deleted off his CV, is my guess.

Having seen it now... I can understand why.

Now, when I first heard about this film... and it being a “wheelchair guy of death” movie... I was stunned and imagined it was kind of like a Death Wish meets Ironside kind of deal. I was wrong... but that premise maybe does need looking into at some point (Hollywood take note!). The movie also does put a strain on good taste (if you subscribe to such a ridiculous notion) and it’s really just not as good as its central gimmick sounds. And there are some easy identifiers as to why.

The thing is, this film has an actor called Ron Slinker who genuinely has no legs and out of all the cast in this film, he does a pretty good job actually... although this is the only movie he’s been in, according to the aforementioned IMDB. He isn’t however, in this single role at least, someone who you can sympathise with. In this film, which seems inappropriately titled to me, Mr. No Legs is actually a villain... and for pretty much all of the movie he is just a henchman. This has got to be an unusual phenomena in movie history I reckon. Can you imagine if they’d have named a Bond movie after the villain? We’d have movies like Oddjob or From Grant With Love. My only clue as to what the producers were thinking on this is that Slinker’s act is so much of a novelty that, compared to the rest of the film when he’s not on screen (and he really isn’t on screen all that much), the novelty of his character kind of carries the movie in some respects.

So, okay. Let me tell you about the one good thing in the movie, mostly represented by one scene in which the title character’s boss has sent some assassins to get rid of his insubordinate henchman, Mr. No Legs. This guy is muscular and dextrous enough to be able to jump out of his wheelchair, spin around on his arms and kung fu the bad guys to death (well... badder guys) while making silly Jim Kellyesque noises with his mouth (believe it or not, Jim Kelly actually turns up in a blink and you’ll miss him long shot cameo in this film... which I think may even be a stolen shot for all I know). Slinker also has his trusty wheelchair which is a rolling arsenal of death, since it has shotguns built into the arm rests and a handy ninja throwing star hidden on it, which Mr. No Legs uses in this particular scene.

So yeah. Antagonist with no legs, who does unnecessarily noisy kung fu, has shotguns built into his wheelchair and uses a ninja throwing star. And as brilliant and as mind blowing as that sounds... this still manages to be a drab and terrible movie.

The film features another longtime 50s horror/sci-fi B movie legend, John Agar, as the two main protagonist detective’s police captain but, although there are a few character actors like him scattered around here and there, the majority of the acting is pretty useless. Now some of that might be the very... well let’s just say 'naive' scripting. There’s stuff here which the heroes and villains alike get up to which seems to have no 'real world' impact or follow through and it’s kinda like the whole cast of characters are living in some kind of mythical screen land where the only real rules of cause and effect are dictated by whatever the writers want to happen... as opposed to the natural course of what would actually happen.

The framing is not particularly good either and, though the editing is certainly competent, some of the transitions between scenes seem like they’re not really transitions at all. In fact, they look like weird blackouts in the middle of a scene where the production ran out of money to film the rest of those scenes or just forgot to send the second unit out to do pick-up shots. I’m not saying hand on heart that is what happened, I just don’t know. But there does seem to be a heavy atmosphere of unexpected curtailment hanging over the majority of the movie. At least, that’s the way it seemed to me.

The film ends with what amounts to a massively long car chase which, bafflingly, mostly doesn’t feature the two main protagonists or, indeed, Mr. No Legs... up until the very last few minutes when our 'heroes' kinda cameo in their own denouement. It’s pretty unspectacular, consists mostly of long or medium shots with the occasionally baffling 'in car' shot cut in randomly for good measure but... frankly I was just waiting for it to be over to get to whatever happens next. Which turns out to be the end credits, as it happens.

Overall, while the “what the heck” premise and promise of this film were too tempting for me to resist ever being able to see it, I would have to say that I found the film lifeless, naive and ultimately just very dull. I don’t feel I could recommend this to anyone except those who are as seduced by the idea of the central character and his weaponised wheelchair of mayhem as I was... and only then, not without a severe warning and world of apology.
Posted by NUTS4R2 at 19:44