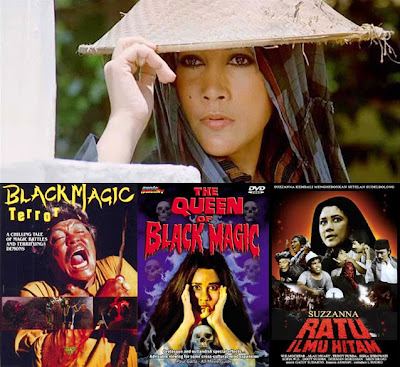 Okay then. So the day after I watched Mystics In Bali (reviewed here), I watched another Indonesian “horror” movie and, although it’s mostly a completely different experience to that film, I noticed the two films did share a certain “less than common” moment which gave me pause to think. I was expecting it in the first film but didn’t realise something similar was going to feature in this one... more on that a little later.

So this film is wonderfully shot and also, I’m guessing, filmed on a different kind of stock than Mystics In Bali. The colour schemes are quite vibrant and rich and it reminded me a lot of the kinds of films the Shaw Brothers were producing back in the 50s and 60s. Stuff like the four Monkey movies, for example, or the Golden Swallow series.

Now this one tells the tale of Murni, who is in love with a guy who promises her the earth but instead, just has his wicked way with her and then goes off to marry the daughter of the village leader. However, the marriage never goes through because “black magic” intercedes in the wedding and he blames Murni, since she lives in the general direction from whence the forces of darkness came.

With no evidence or anything remotely sensible guiding either the actions of the resultant angry mob, or indeed the course of the movie, Murni is thrown off a cliff to her death in retaliation for her unproven crime. However, there she is caught and befriended by a master of Black Magic... who turns out to be bad guy number two. He teaches her his dark arts so she can go and take “cheapo special effects revenge” on the people who tried to kill her and also, as it happens, have now killed her mum.

So, after a little time passes, she starts appearing before her enemies and uses her psychic powers and strange interlocking thumb gestures to destroy them, in some cases making them grow and expand like a transformation scene in a typical episode of Manimal... except... you know... bursting into bloody sprays of death instead of transforming into a leopard or something. After a while, it doesn’t take long to realise that her mentor is the man responsible for the whole wedding fiasco in the first place... and he wants the whole village dead. So he continues to manipulate her into causing more deaths... such as when she gets bad guy number one to spasm around so much that he pulls his own head off.

Of course, the head then flies up off the ground, its eyes glowing, and starts trying to eat people, nipping on whoever happens to be nearest. And this is what I was talking about at the start of this review. In two days I watched two films from Indonesia and they both featured flying heads ripping free of their bodies and doing bitey stuff. Is this some kind of cultural trademark of Indonesian cinema? Seriously people, flying heads? What gives?

Enter the good guy who, once Murni has finished her work, falls in love with her. Of course, he is also a white magic force for lightness and he and Murni are totally unaware that they work for opposite forces of the magical spectrum. After a while the evil black magic dude tricks Murni into thinking the truly righteous white magic dude is totally into another woman, after he’s promised to marry Murni, so she immediately relapses into the whole “I’m going to destroy the entire village” frame of mind again.

At the end of the day it’s black magic queen up against white mystic and then black magic mage against... well I’ll let you discover that if you ever get around to seeing this one. I think it’s kind of interesting though that in both the Indonesian movies I watched that weekend, they both featured a woman whose black magic powers were either controlled or manipulated by a more villainous person  in order to achieve their own goals for them. I’m wondering, also, if this particular story trait is endemic of the culture it's coming from or whether it’s just a coincidence. Would be interesting to find out. Of course, it could just be a “successful formula” thing being exploited as much as the producers could.

The film is far better put together than Mystics In Bali, it has to be said. Even the acting is far more competent than what passes for it in the other movie. That being said though, while The Queen Of Black Magic is a more satisfying movie in all round sheer cinematic competence (relatively speaking), it has to be said that it’s nowhere near as fun a movie as Mystics In Bali was. It lacks, for the most part, the sheer gob-smackness of the content of the other movie and even a scene where a person blows up towards the end, has inappropriate sound effects (if someone has forced you to spontaneously combust, you presumably make wet squishey noises, not the sound of a power plant blowing up?). All in all, an enjoyable watch but not as necessary an experience as Mystics In Bali is. Still an education, mind you.