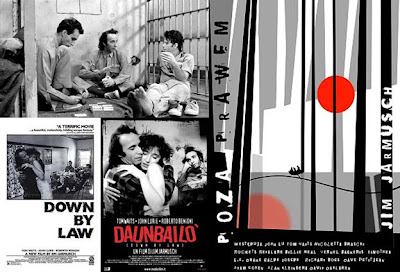 Tom Waits For No Man

As a celebration of the completion of his latest feature film, actor/director James Devereaux decided to screen Down By Law and it’s not hard to see why. Devereaux’s work is quite influenced by Jarmusch, as much as it is by the likes of Hartley, Godard, Melville etc. His own films aren’t in any way homage but certain concerns and the occasional stylistic flourish do tug at the collective cinematic memories instilled in the celluloidal history weaved by such directors as these (Wow, that was an awkward sentence. Ah, it’s the only way I can express it at this hour so I’ll just leave it in).

Down By Law is a film I first watched on 10th September 1990, one day after it was shown on Moviedrome on BBC2. Yeah, I recorded it off air, you think I was going to stay up that late at night? It was the first Jarmusch movie I’d seen and I responded to it really well. As a result, I got a few Tom Waits albums for Christmas that year.

It’s a film which starts off with a phenomenal pre-credits sequence combining two long, sideways tracking shots of New Orleans pitched against Tom Wait’s song Jockey Full O’ Bourbon. Each of the tracking shots ends with one of two of the three main protagonists, John Lurie and Tom Waits... and the women they are sleeping with. When Lurie’s girl opens her eyes, we cut into the second tracking shot going in the opposite direction. When Tom Wait’s lady, played by Ellen Barkin, opens her eyes, we finally get to the opening credits of the movie. It’s kinda of interesting to note that the two main songs on the film’s opening and closing credits are being done by one of the main protagonists while the other character we just met, John Lurie, provides the film with it’s distinctive jazz(ish) score.

After this powerhouse opening, Jarmusch slows things down for a while as we follow both characters until they both wind up sharing a New Orleans jail cell and getting on each other’s nerves. Asides from the opening tracking shot, some shots of Waits driving a car, a walking scene, and the very occasional POV style tracking shot, there is no camera motion throughout the whole thing. Everything else is shot, in lurid black and white, without any motion other than those of the actors. It is a film built up from canny dialogue, great performances and good editing.

After driving each other crazy for a good long time, Jarmusch reintroduces a character who makes a fleeting appearance earlier in the film, played by Roberto Benigni. Benigni is one of those people who is naturally funny and, although the situations Waits and Lurie find themselves in are already quite... well... smile inducing, Benigni’s English-language challenged, stranger in a strange land character hits like a grenade going off in the movie. The timing and comedy is absolutely hilarious and the charm of his character soon rubs off on the other characters until they all escape from prison together.

Of course, being a Jarmusch film, you don’t actually see the escape itself. This is unimportant and is just a way of progressing the relationship of the three characters in a different environment and set of situations. And, of course, Benigni is the character who highlights Jarmusch’s near obsession (but let’s call it an interest, shall we) with the alienation of people brought about by language and misunderstanding. All of Jarmusch’s films, or at least all the ones I’ve seen, have a theme of the way people communicate independent of language and of the way different cultures can show no awareness of each other but share a common bond... such as the way the old, dying Italian-American mobster figures are pitched against the long dead code of the samurai in Jarmusch’s Ghost Dog: The Way Of The Samurai, even though both cultures are at the same point of relevance (or lack of) in their time and place.

Benigni is very much a poster boy for this kind of exploration and the bond grows between the characters, even as they are shown to be resisting any kind of social commonality throughout the entire movie... summed up best when Waits offers his hand to Lurie and then yanks it away before Lurie can shake it in the final scene. This is almost simultaneously underplayed when the two characters swap coats before heading off in different directions.

Jarmusch’s film is assured and witty and, although todays young Hollywood blockbuster audience mentality might have a problem with the pacing, it’s a film that should hold anyone’s interest. The atmosphere is electric and Robby Muller’s cinematography is characteristically outstanding, pitching verticals in heavily forested areas with tree trunks in a metaphorical reflection of the prison bars used so well as a visual element in the first half of the movie. As if saying to the audience that, yeah, these three may have escaped prison but Waits and Lurie have not escaped the prison brought about by their own alienation of each other just yet.

It’s a satisfying film and, unlike many movies made today where the emphasis is purely on action and less inclined to allow to characters to talk to each other for more than a minute, is a work which stands the test of time and can sustain repeat viewings, always holding the viewers interest with the long, laid back passages of silence pitched against the intense rhythmic changes of dialogue which punctuate the lives of these three imprisoned souls. A film which is always going to be an inspiration for aspiring film-makers and an unquestionable work of American art which, once seen, will never be far from the collective consciousness of those noble souls who strive to make an artistic contribution to the world in which they live. Jarmusch is one of those unique directors you will always find yourself returning to. And Down By Law is one of his great masterpieces.

If you love film and you haven’t seen this piece, then maybe it’s time you put matters straight and acquired a look for yourself. It is a sad and beautiful world... and Jarmusch lazily shows you both the sadness and beauty in a way which you will remember for years to come.

For James Devereaux’s words on Down By Law, go here...