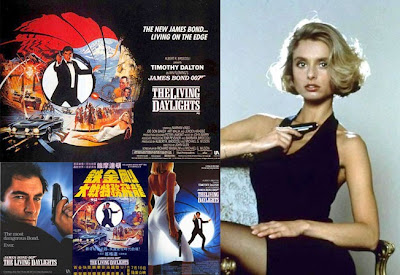 Okay, so after losing interest in the Bond movies after Octopussy and not actually bothering to see A View To A Kill at the cinema when it came out, I got interested again when a newspaper proclaimed that Roger Moore would not be in the next film and that the producers were looking around for a new Bond. It was all the guys at school were talking about (asides from whatever video nasty they’d seen that week). I piped up and said that it would be great if they could ever think to get the guy from Remington Steel in as James Bond. He’d be perfect for the part. This comment was met by scorn and derision from most of my peers, hardly any of whom had been watching the show or even knew who Pierce Brosnan was. And why would a little TV actor ever be considered to play a character who was, at the very least, the English equivalent of a full blown super-hero.

I would have been a lot more confident of my suggestion, of course, if I’d known that one day, Brosnan would indeed go on to play the role I thought he was perfect for. Moreover, I would have been extremely surprised, to say the least, if I’d known that the producers were indeed considering him to play Bond in The Living Daylights and had more or less offered him the role. Only the contract of the Remington Steele TV show, expiring just one day too late, prevented Brosnan from playing the role back in 1987, it turns out.

Anyway, as it happens, the press finally announced who would play Bond and it was certainly a surprise. At first I couldn’t place the actor but then I remembered he was Prince Barin. Yeah, that’s right. Timothy Dalton, the guy who had fought Sam J. Jones on the spikey-tippy thing of death in the 1980 version of Flash Gordon would be Bond.

So this was kind of interesting and I took confidence in the fact that Roger Moore wouldn’t be clogging up the next Bond picture and decided I’d go and see this one. I remember seeing it in a cinema in Llandudno on my Summer holidays when it came out, if memory serves. It had an interval with an organ solo in the middle. They still did that in Wales back in the 1980s.

And you know what? The Living Daylights was awesome.

It opens with a quite spectacular action sequence which, for my money, is one of the best pre-credits sequences in Bond history. And no small part of that is due to John Barry’s kick ass scoring, it has to be said. This was Barry’s last film for the franchise which had made him a household name, due to various sticking points about his control over the title songs and the deals behind them, but he didn’t know that at the time and, frankly, the score is way ahead of the stuff he’d been doing recently on the Moore films.

The score aside, though, Timothy Dalton is absolutely wonderful as James Bond.

Now I don’t have a lot of love for his second and final outing as Bond in License To Kill (bleah) but even in that film, he does the role of Bond perfectly (even if the second movie is not much cop). Maybe not straight from the book (none of the best Bonds are) but certainly he upholds the traditional values kick started by Sean Connery and co in Dr. No and it has to be said, he is one of the all-time great Bonds. And this is his all time great Bond movie. The always solid and reliable John Glenn outdoes himself here, producing a film which seems cut from a slightly different cloth to his previous outings. It’s his high point for the series as far as I’m concerned and the pacing and rawness of his framing and editing coupled with the humourous dialogue and near perfect script make for a beautiful Bond film which I’d gladly include in my top 5 Bond movies if I ever had to make a list.

The writing does actually take a few little moments from Fleming’s original short stories from this collection too and, though the script was originally written for Roger Moore and certain quips and gags made it through to the draft used for the final product, Dalton’s delivery is much more acceptable and rugged. He makes the part his own very quickly and you never once stop believing in him in the role. I hate to gush about an actor so much, especially not one who I’ve not seen in that many movies, but Dalton acts his socks off in his two Bond films and really nails the part. It’s a brilliant performance and one that bears many repeat viewings.

Of course, with all this newness to the role, including a new Miss Moneypenny, there’s a lot of the familiar brought back in to compensate. So Barry’s score once again ushers the new Bond in and you also have Desmond Llewellyn’s Q, Robert Brown’s M and, sadly (but perhaps this character did overstay his welcome just a little), Walter Gottel’s last appearance as running character General Gogol.

But none of this detracts or adds to the fact that you have an absolutely brilliant and entertaining movie with a bunch of supporting actors and actresses like Maryam d'Abo, Jeroen Krabbé, Joe Don Baker, John Rhys-Davies and Art Malik... all doing an incredibly good job and pulling together to make this one of the best of the post-Lazenby Bond films. Even a throwaway character used to build confidence in the Bond personae, called Saunders and played by Thomas Wheatley, is given a certain depth to what is actually a very small role. It all works so well and you believe that Bond is fairly angry by this character’s death... enough that you know that handy licence to kill he has will not be waiting too long before getting some serious usage.

The gadgets are back too but they aren’t too overused and Bond’s new Aston Martin is equipped with rockets and such like to help him on his mission. The best addition is an update to the old Goldfinger tyre-slasher gag, but with laser cutters instead. A nice little homage in a film which itself was marking 25 years of Bond on screen.

And, as I said near the start, you have John Barry’s absolutely brilliant score building and releasing tension throughout, including some electronic enhancements which I think is the first time he got back into major orchestrations for synthesisers again on a Bond film since his score for On Her Majesty’s Secret Service. It’s the one part of the score that tends to date the music a little bit but it certainly doesn’t stop it being effective. And since the plot of this film involves a Bond girl who is a cello player, you even get to see Barry in the actual film himself, conducting her in a symphonic concert at the end of the movie. This is all good stuff and adds value to subsequent rewatches.

Not much more to say about this one, to be honest. If you want a jumping on point for Bond, this would easily be one of my top five picks (but still way behind On Her Majesty’s Secret Service). Certainly the director and producers got all the ingredients just right on this one... not once overcooked or presented too raw. A great 007 meal which deserved a much better dessert than what it got in the next film.

Dr. No
From Russia With Love
Goldfinger
Thunderball
You Only Live Twice
On Her Majesty’s Secret Service
Diamonds Are Forever
Live And Let Die
The Man With The Golden Gun
The Spy Who Loved Me
Moonraker
For Your Eyes Only
Octopussy
A View To A Kill
The LIving Daylights
Licence To Kill
GoldenEye
Tomorrow Never Dies
The World Is Not Enough
Die Another Day
Casino Royale
Quantum Of Solace
Skyfall
S.P.E.C.T.R.E
Posted by NUTS4R2 at 19:04