Season Of The Witch 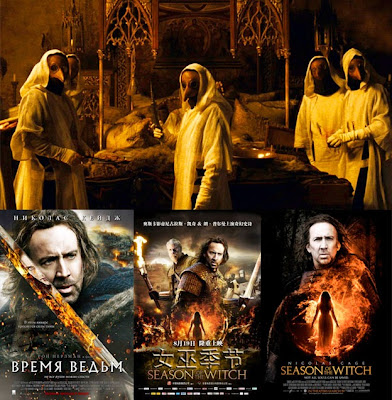 Warning: Spoilers of the witch in this one...

A few years ago a movie called Black Death came out at cinemas and I was hoping it was going to be a nice little tale of swords and sorcerers in medieval England. Instead, although skillfully put together and certainly quite gripping in places, I was disappointed in the film because the whole thing took on a certain ‘scooby-doo’ aspect when it came to the actual witchcraft element of the tale and, tonally, the film bore more resemblance to films like Witchfinder General than anything that could have been conjured up as something ‘not of this world’. I reviewed it here and, though I can appreciate it on some level, it’s really not my kind of thing in terms of things I’d watch for entertainment. That kind of subject matter really needs to be treated in a more ‘fun’ fashion I feel, otherwise it becomes fatally serious.

Not too long after, Season Of The Witch got released in cinemas over here having suffered, it turns out, severe release delays and a load of reshoots by “rescue director” Bret Ratner. I was kinda interested in seeing it to see if it did the same thing as Black Death or actually gave my b-movie monster passion a work out but, alas, the film only lasted a week at my local movie house. However, I have a friend who has been persistent that Season Of The Witch was a nice bit of film-making so, despite having been critically reviled the world over (I found this out after I’d seen the movie), when I chanced upon a copy for “the right price” (Cash Converters Blu Ray for £3.99) I decided to give my friend the benefit of the doubt and take a look at it.

I’m kinda glad I did.

The film stars Nicholas Cage and the always watchable Ron Perlman as two long serving knights who have become disillusioned with the Holy Crusades after being asked to slaughter women and children for God’s cause. They desert the army but, two months later, find themselves once again allied with the church when they are tasked, with a guide, another knight and a priest, to escort a witch to a far off monastery (requiring several days travel) to put her on trial and read from the last copy of The Book Of Soloman... as a solution to ending her witchery and lifting the plague from the land. Here, of course, it gets a bit tricky because Holy Knights and bubonic plague are two completely different time periods but, in deference to Sergio Leone’s use of the IRA in his Western A Fistful of Dynamite (aka Gui La Testa aka Duck You Sucker) I’ll turn a blind eye since it makes for a good story and in our postmodern times and attitudes I seem to be the last person upholding that kind of “finger pointing and wagging” at the sight of anachronism anyway. So I won’t spoil the party here... although it would be good if writers and directors of historically set dramas could read the odd history book once in a while.

So far, so good. We have, basically a medieval road movie with witchery, which turns out to be not just witchery, and lots of fighting and moralising and so on. Cage and Perlman make a heck of a double act as the two larger than life heroes and with various creatures to be slain, especially in the last third of the film, this is about as entertaining as any old relatively well made B-movie can get... so that’s all good. There's even a cameo by Hammer Horror stalwart Christopher Lee although, it is such that I completely failed to recognise him when he was on screen.

I especially liked that the film doesn’t scrimp on letting you know that there is truly something supernatural going on either. The opening prologue, which I suspect is a result of one of the reshoots, certainly makes it known to the audience that there are demonic forces at work here when the aftermath of a triple witch hanging ends up with one dead priest and a burned copy of the book which our heroes are later going to seek out. Followed up by a nice and exciting opening montage of Cage and Perlman fighting and drinking their way through a number of Holy Crusades, its a genuinely good set up for the movie and, although the pace slows a little to make way for things like plot and... um... well a bit of a plot anyway, the film makes good on its promise and offers up exactly the kind of movie you’d expect from taking the main quest at the heart of this film to its logical confusion. That is to say... never mind the witchery, they’ve got full on demons and possessed dead bubonic reanimated zombie priests to deal with.

Some of the photography is really beautiful and, even when it’s not, it is at least competent and this also goes for the editing in this one too. The action is not as confusing as a lot of modern Hollywood movies and you can follow it fairly well. Add in discussions by the various characters about the confusion as to whether their prisoner is a witch or not and recollections of “the good old days”, when you could be sure that a good head lopping was being administered to the proper recipient, and you have a film which is just about entertaining enough to not get boring. Add some CGI demons in the mix and you start venturing into Robert E. Howard territory too for a while.

The film ends in a way diametrically opposed to how most Hollywood films end these days... that is to say, there is some significant sacrifice on the side of the just, and I found this to be a bit of a relief to be honest, although I suspect this is one of the things that has helped the movie garner the bad reviews it has. People do not necessarily want to see their films ending this way, with fallen heroes and voice-over narrative. But I liked it... it reminded me of a crude version of the closing of Seven Samurai in some respects, although this film is truly not even close to the same league as Kurosawa’s epic masterpiece, to be sure.

But the main ingredients are here for a good time with a movie. Knights in armour, swords flashing, heads popping, zombie priests and big as f*** flying demons to boot. It may not ever really rise above the “quite entertaining” level but, compared to some modern Hollywood movies, it’s got a lot more going for it than a fair proportion of them. Give it a watch if you have nothing better to do, maybe.