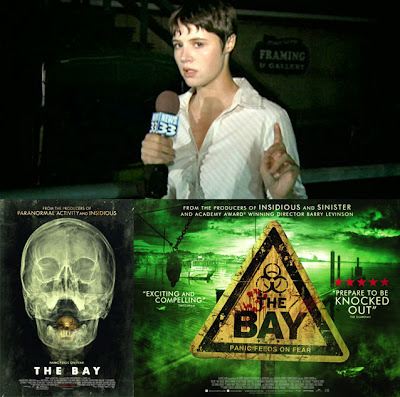 The Bay
2012 USA
Directed by Barry Levinson
Momentum Blu B

Warning: Spoilers on this one but nothing that isn’t already
foreshadowed quite overtly at the opening of the movie itself.

You know, I really wanted to like The Bay.

I saw the trailer online, maybe a year ago now, and it looked pretty good to me. And then I waited for what seemed an interminably long time for the film to hit my local cinema. It never did and, I suspect, it probably went straight to video (barring the odd FrightFest screening, I would imagine). When I found out that it had bypassed the cinema I got really angry because the specific trailer I’d seen looked so intriguing and I’m an admirer of “found footage” horror movies when they’re done well. These things should get a cinema release.

After the film hit the home sell-through market, I started getting some pretty mixed quotes and word-of-mouth on it. On the one hand you had the critics saying it was an intelligent horror movie for grown ups, or some such stuff (I’m still not sure if I’ve ever met a grown up but I’m sure one or two must exist somewhere), whilst various comments from people on Twitter and the bloggers who had seen it were more of the opinion that the film was, well, a bit rubbish.

I’m sorry to say, although this does seem to ring true these days when you pitch the majority of critics against bloggers and the general public at large, that the bloggers were right. I can understand why the film never got some kind of wide cinema release in this country (to my knowledge) but, having said that, I don’t want to fall into the obvious trap of blaming an old guard classic Hollywoodland director like Barry Levinson as being someone who would have been best leaving well alone and in the hands of a lower budget, younger film-maker either. Quite frankly this movie, and I may be way off base here in this speculation, looks like it’s been tampered with “after the fact” and that there’s been some “studio intervention” along the line. Maybe not but, well, that’d be my guess anyway.

So the film is about an attack on the coastal town of Cheasapake Bay which is pretty much wiped out by something appearing at first to be a contagion caught from the water... although this is a little murkier in terms of what is actually happening... but I don’t want to give too many plot details away.

The film comes at us with the premise that we are watching “banned but hacked” footage from many surveillance sources which the government has suppressed, and is narrated via Skype by one of the main protagonists... as much as this movie can be said to actually have a main protagonist. It’s a film she’s making to ensure that “the truth is out there” but the modus operandi that worked so well in George A. Romero’s Diary Of The Dead really falls at the first hurdle here.

The truth is, the footage that Levinson has shot and edited is, for the most part, quite sound and interestingly made but the presentation of that footage really works against it in terms of giving us something that is a) credible as found footage and b) actually scary.

Okay, so the first big problem has to be the use of music. If this is a compilation of footage constructed to show the world what is happening, then surely the use of diegetic music which is then continued into several other shots not related to the original shot in question, in other words it’s transformed into non-diegetic sound, would in no way, shape or form find itself in something that is supposed to be some kind of document of events. This is pretty bad in and of itself... why would the character cut the footage in this manner? Things get worse though because, after this happens fairly early on in the film, we then start to get scenes throughout the movie, quite a lot of them in fact, where sinister incidental music has been used.

In a movie posing as, for all intents and purposes, a “found footage” film. I mean, c’mon, I know a lot of documentary makers do this all the time but that’s because documentary film-making is rarely the embodiment of the truth, its the embodiment of a personal agenda. However, the only agenda the fictional character has in this work is to go public with the story. This is not about making people feel uncomfortable or hitting them with atonal shock notes when something scary happens... it’s about getting things out there. This movie has a full blown score... and it blows away all credibility of the movie’s central premise. And the really sad thing here is that the footage Levinson gets is done well enough to be scary on its own without sacrificing your illusion of “point of view”.

Another problem the movie has is that you really don’t need one of the characters giving you voice-over narrative about what’s happening as the events unfold. The dramatis personae is not needed and the footage cut together by itself, and without music, in such away that things build in a more linear fashion, would have been a much better proposition, I reckon, than the film as it’s been edited here. I suspect the studio wanted to make sure everyone in the audience is crystal clear on what is going on but, you know what? They don’t have to be. The footage, cut differently, would have pushed the atmosphere on its own terms and maybe then people would pick up the other stuff on repeat viewings if they liked it well enough.  With the additional narrative asides over the top of it, it just sounds a little like overkill when you really need to just be lulled by the scares on their own terms. Worse, it makes it look like the director didn’t get all the coverage he needed on the footage and that he’s trying to explain the stuff he’s missed or pad it out or something. I don’t think that could actually be the case, though, on a Levinson movie. At least I hope not.

Another annoying thing is the use of constant “flashback footage” scenes which are dotted throughout the running time. I’m all for this approach and can understand why these might have been deemed necessary... but I think they stall the narrative, repeat things you’ve already picked up on and are just generally bad for the movie when structured like this. Perhaps a better way to do it would have been to lump all that footage into one or two chunks and just have one of the characters find it three quarters of the way through the movie and play it all back in one hit then. This tactic worked pretty well in the first [REC] film with all the stuff about the Catholic church and their investigation of the horrors in that film’s milieu... so maybe this is something the studio could have considered?

Again, for all I know, this was not a mis-step from Levinson, who I respect a lot as a director, but possibly some kind of studio interference to help build suspense where it wasn’t needed. I guess if that’s the case we won’t find out for a long time but I wasn’t appreciative of the way this stuff was edited in at regular intervals and I did find myself getting confused by things at some point because of this kind of thing. I think found footage probably needs a fairly linear structure to it if you want it to play out right... or go with larger chunks of overlapping time frames like [REC] 2 maybe?

The saddest thing about The Bay is that the premise is cool, the acting is not terrible (mostly) and the effects and make up are really quite good. Like I said, it’s the way it’s been edited together and presented which really dulls its impact, I feel. It needs a more progressive, escalating rhythm than it has and the attempts at foreshadowing what’s going to happen, only serve to take away any suspense the movie might have had. This is not a film I could, in all conscience, recommend to many people, although I would love to see a better cut and treatment of it attempted at some point. Heck, even a remake might be a good idea because this film has a nice central premise (clichéd but nice) and would have been brilliant as, say, a third movie in The X Files franchise. Unfortunately, the film isn’t scary and the fake found footage feels exactly like what it is... a fake. And nobody likes it when you fake it, people!