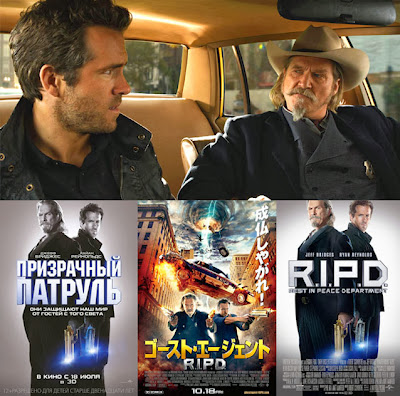 Warning: There are some slight spoilers about the basic set up of
the plot here, most of which are already detailed in the trailer anyway.

R.I.P.D is one of those simple concept pitch films which comes up every now and again and, for all intents and purposes, the trailer is not really far from the truth of the movie. With apologies to Mark Kermode and his recent comments on summing up a movie in a few words, the trailer was pretty much "Men In Black does Ghostbusters". And that’s not a million miles away from the truth, in actual fact. Maybe a bit less Ghostbusters and more Men In Black sequel in tone perhaps but... well you’ll get the idea.

The plot involves young cop Nick (played by Ryan Reynolds) who is killed by his partner Hayes, played by Kevin Bacon. Instead of rising up to the pearly gates to face his "Judgement Day", he is instead whisked sideways and joins up with the R.I.P.D... that’s Rest In Peace Department to you. Here he is partnered up with the always watchable Jeff Bridges playing a 19th Century cowboy called Roy... although I think its fair to say that the character as Bridges plays him is less inspired by the name Roy and the connotations that has with the "All American Western" at a certain stage in its history and more informed by Bridges stint playing Rooster Cogburn in the Cohen Brothers version of True Grit. He does seem to be channeling that part a little, although he manages to make his pronunciation and delivery only just comprehensible at times, it has to be said. But it’s a fun performance and certainly entertaining when pitched against Reynolds fish out of water rookie in the R.I.P.D.

So, anyway, the job of the R.I.P.D is to track down all the escaped “dead ‘uns” who have fled to earth and bring them back for their final judgement. Thus endeth the plot and thus begineth the rooting, tooting and shooting. And there’s not much else involved, to be honest. It’s a very formulaic movie but there’s certainly nothing wrong with formulaic entertainment done right.

There are some very obvious clichés right from the outset though, it has to be said. You don’t put someone like Kevin Bacon into a picture like this, for example, playing a minor role so, even before the first ten minutes are up and he’s betrayed his true colours, you know that he’s going to be more involved in the plot later on. As it happens, a transgression Reynold’s character has made means he needs to make up with his fresh widow, who is under the spell of Bacon and it’s here that the film really does go exactly the way you think it’s going to go, I’m afraid. I’m not going to tell you want happens but I’ll be amazed if you can’t work out the little twists and turns before they occur.

That being said, it’s a nice bit of Men In Black style chemistry the film has going for it, without quite the same level of rich details and twists which that specific film series tends to bring to bat. You could, however, argue that it’s more streamlined with less deviations, entertaining or not, from the story line and, if you did, I’d be happy to defer to that judgement. The relationship between Bridges and Reynolds is strained and unforgiving a lot of the time, but that actually works in its favour. Do you really want to go through this whole movie where the two lead protagonists are acting all “nicey nicey” with each other?

On the whole, the performances are all excellent. I especially enjoyed Mary-Louise Parker’s Proctor character, and her relationship with Roy, but all the performances are as dead on, if you’ll excuse the inadvertent pun, as they need to be for a ‘popcorn fodder’ kind of movie like this one. And, as it happens, it’s supported by excellent special effects, supportive scoring, good solid direction and, helpfully, editing which won’t confuse you in the action sequences which, considering what happens during those sequences, seems to be to be a bit of a minor miracle right there. One thing I can’t tell you for sure though is whether it’s a good adaptation of the Dark Horse comic book it’s based on... I’m sorry, I just haven’t read it.

The film is predictable, as I said, but there are really two ways the ending, given its target audience, could have gone and you won’t know which of the two possible versions, involving Nick’s widow, they go with until right at the last knockings. That’s okay though, at least you’ll be guessing up until the last minute. As is expected in films of this nature, it’s easy to see where you could get a sequel from on this one and I certainly would like to see where the studios would go with this as I did find myself quite entertained through most of the running time. Alas, I don’t think it’s been at all successful financially and so it’s unlikely now that we’ll be seeing a sequel to this one anytime soon... unless it manages to pull an Austin Powers or The Transporter in terms of its DVD takings. Time will tell I guess... but I’m not expecting much from that revenue avenue.

However, fans of good time Hollywood blockbusters where you really don’t have to be thinking about anything while your watching should have a fair enough time with this one. Worth a watch before it leaves the cinema, I think.