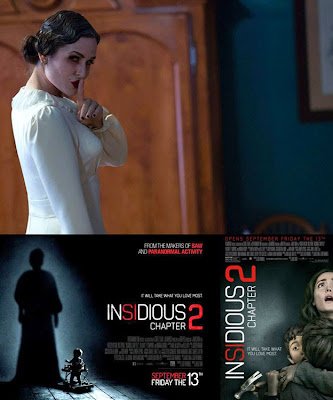 Warning: Big spoilers for both Insidious movies
waiting to pounce from another dimension as you read.

It’s funny. I seem to remember being a lot more disappointed with the first of the Insidious movies than my review here seems to show. Maybe I was being a little kinder to it than I would be nowadays. I remember being really annoyed with the last half hour when the weird “other dimension” creature showed up, turning it into a boring teen nightmare monster flick. However, I also remember being impressed enough with the execution of the on-screen scares which built up to this last half hour to the point where I guess I cut it some slack, maybe. Although, you could see the end of the movie coming a mile off.

Insidious: Chapter 2 is not, as many reviewers would have you believe, a sub-standard carbon copy of the original movie but is actually a valid sequel to the first film which, yes, truly tries to hit the same points that its fan base loved in the first one, but which does so quite validly because of the history of the events which were visited upon this same family in the first movie. I have to say that there was enough going on in the new one to keep me interested and that, although there are some pretty annoying weaknesses in this one, overall I felt a little more entertained than the first time around.

Okay, so this one starts of in a somewhat scary pre-credits sequence where we re-meet the father of the family, Josh, but as a little boy. He’s obviously having some problems with the spirit world and we also meet a younger version of the psychic, Elise, who was killed at the end of the last movie. This opening sets the story up to get back to the family in the present, one day later after the events in the first movie.

Well, Josh is still possessed, as we knew from the end of the last movie, by something which came back in his place and so most of the first half of the running time is setting up the same kinds of scares but with the audience knowing about what’s going on a lot quicker than any of the regular characters realise. The problem here is, because there’s a lot of story to cover in this one, the scares are a lot quicker to come than they were in the first movie and so there’s no real pacing involved. Scares of this kind usually need to exist in an atmosphere of lurking dread and slow build and here... it’s just not scary because the timing seems wrong and rushed. It’s like coming in straight into the third act of a horror movie without bothering to set the scene.

Another big problem with things going on here is... all anyone needs to do is take a photograph of pseudo-Josh in our dimension and all would be revealed. Just as they’d twigged in the last film. Seems like all the characters in this movie decided to have collective amnesia on that front. Bit of a shame really.

However, this movie makes up for what it lacks in scares with some interesting plot spins leading off from the first movie and, by the time you’ve got a couple of the film’s main hero characters wandering around in the afterlife guided by Elise (Lin Shaye reprising her role from the first movie) then things start to get interesting. It seems that in the realm beyond our senses, the people who dwell in this strange, halfway dimension, are able to travel in time and this kind of temporal relocation means we get to discover the other viewpoint of some of the things which went on in the first movie plus other perspectives of things which went on in the pre-credits of this movie. It’s all a bit like Jon Pertwee and Katy Manning appearing to themselves at the start of an old Doctor Who episode, to be honest, but I do like these kind of “tempus fugit” style shenanigans, truth be told, so I don’t see any fault here. The film also gives us a nice new villain and a nice new ally character, included in an arsenal of interesting characters, so that’s all good. It’s also got rid of that creepy surreal neon guy from the last bit of the first movie so... yeah, good call.

Ultimately, it’s not that effective as a scary movie and I can understand why some people are disappointed with it. I think though, it does have a lot of nice things to say about the events of the first movie and gives it a more grounded place to live in. It’s still quite surreal in places, which is a good thing, but it’s not as in your face and unsubtle at that kind of stuff as the first one and so, consequently, this film is more effective in that sense, at least.

It’s also good that even when characters are dead, they can still go running around and helping people out and the fact that, even at the end of the movie, Elise is still working with her two assistants from the first movie (although they themselves don’t even know she’s there) gives the Insidious universe a more interesting and durable texture to it than some movies in this genre have going for them. And the ending of this actually sets it up for a third installment where you just know someone has been left behind (and consequently someone bad has come back in a form we don’t know yet) and I hope a third movie gets the green light so I can see what Elise is seeing at the end of this one.

All in all, the Insidious movies put together are not half the film that the same director’s The Conjuring (reviewed here) is. If you want to see a truly creepy horror movie, go catch that one. But I can see how Insidious: Chapter 2 might win a certain following and I can certainly imagine many people would use this as a comfort film, much like they would a zombie film. It’s not the best horror movie out there, by a long shot, but it’s certainly got its own thing going for it and the performances are all great, including the always watchable Patrick Wilson as, not one, but two versions of Josh. If you liked the first movie then I think this one is worth taking a look at sometime.