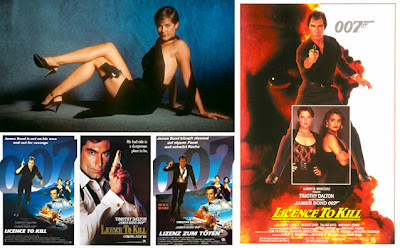 After having my faith restored in the Bond franchise after the trauma of Roger Moore, with Timothy Dalton coming aboard for The Living Daylights, I was ready to see more of Dalton’s excellent portrayal of Fleming’s most famous creation in action. That previous excursion for 007 had been a rare mix - we had a great performance by Dalton as Bond and a great script to work with. Unfortunately, while Dalton is indeed still excellent in his second and final outing as 007 in Licence To Kill, it has to be noted that it’s a really awful movie. Not quite as bad as Octopussy, obviously... but still pretty dreadful.

It's said at the time that the original title of this movie, Licence Revoked, was changed because it was thought an American audience wouldn't understand the word revoked. I don't know if that's the actual reason the title was changed but, title change or not, this movie is interesting in a lot of ways.

For starters, it’s the last film for a lot of the EON Bond personnel. Timothy Dalton, Caroline Bliss, Robert Brown and even regualr director John Glen would end their run on the series with this one. Similarly, it’s the last one where Cubby Broccoli was actually on set, after being taken ill halfway through the shoot on this one. After this, he still produced but took something of a back seat, is my understanding.

But there’s lots of other interesting stuff going on here... especially on the acting front. Pedro Armendáriz Jr, son of Pedro Armendáriz, who took his own life after completing filming on From Russia With Love, has a few little moments in this one and, golly, he really does look like his dad in some respects. I remember doing a double take when I saw this at the cinema for the first time with a “doesn’t he look like” moment, before I even knew he was the son of the actor in question.

More importantly, we have David Hedison returning to the role of Felix Leiter and, up until Jeffrey Wright played the character for a second time in A Quantum Of Solace, he was the only actor to have reprised this role. And he’s still my favourite Felix actor. Interestingly, his previous performance as Felix was in Roger Moore’s opening film Live And Let Die, which is ironic because the sequences in this film directly following the opening credits, with Felix being half eaten by a shark, are pulled directly from the novel of Live and Let Die (both Live And Let Die and For Your Eyes Only also have sequences pulled directly from this novel). Now the thing about Felix, is that this happened to him in what was actually the second novel and his arm was chewed off. So for the rest of the books he had a hook for an arm and was retired from the CIA and working for the famous Pinkerton’s Detective Agency, turning up to assist Bond at incredibly well timed moments. Unfortunately, Hedison didn’t reprise the role a third time and, possibly because of the impact of this sequence, the Felix Leiter character was not brought back until Daniel Craig’s first movie in the series, which was the third version made of Casino Royale.

You have Robert Davi as Sanchez, the main villain of the piece, and one of his men is played by Grand L. Bush. Of course, these two had already been teamed up together as CIA agents in the original Die Hard movie, which is kind of an interesting thing too (more on Die Hard in this review a little later... although, if you want to read my review of the first Die Hard film, it’s here). The film also has a young Benicio Del Toro in it as another Sanchez henchman and, as if all this wasn’t enough, this film sees pretty much the most scenes and contribution Desmond Llewellyn’s “Q” has had in any of the movies. A shame his parts seem to get bigger in the worst films in the run, but there you go.

Licence To Kill had a lot of pressure on it to perform. Since The Living Daylights had been released, Hollywood had started getting serious about action again. The intervening two years had seen the start of, not only the Die Hard franchise (still going strong to this day) but also the equally successful Lethal Weapon franchise. Bond was perceived as being a bit old fashioned and corny so the producers wanted to make the content of this movie more adult. Which I’m all for in some ways. Bleeding bullet holes, an intelligent plotline, a bit of sex and other grown up malarkey would not harmed the film in any way, I suspect, and possibly brought Bond back to the status the writers and producers had in mind.

Unfortunately, what we have is a film which is just plain nasty. Torture sequences where a man’s head explodes due to deliberately changing the air pressure on him, grinding machines and so on. This is not adult... in some ways it’s quite a childish, knee-jerk response, actually. It’s just got an unpleasant edge which I find hugely questionable for something which is supposed to be a Bond film. Dalton plays the “grown up” Bond very well, just as he had in the previous film, and you certainly can’t miss his excellent performance in the role as it is giant steps above what Moore developed into during his tenure... but just having the perfect casting does not a Bond film make and the tone is just a little too edgy throughout most of the movie for my liking. I think this plays a big part in why I consider this film to be one of the most disappointing entries in the series.

And watching it again, I can identify another element which goes a good way towards undermining this movie which I didn’t necessarily realise when the film was released. And it’s this...

John Barry had scored his last Bond film with The Living Daylights, due exclusively, as far as I can glean, from his bad experiences working with the pop group A-Ha and his failure to negotiate control of the opening Bond song in any of the later Bond projects he was approached for. He simply refused unless he could do what was wanted for the films and, I have to say, when it’s John Barry you’re talking about, you can replace that phrase with “do what was needed for the films”.

In his place the director went with the late, great Michael Kamen, who had already cut his teeth on the very same two action franchises that had lead the Bond producers to try and up their game a little... notably the Die Hard and Lethal Weapon series. And, to be absolutely fair to him, Kamen delivered an absolutely cracking action score to this which fully integrated the John Barryesque arrangement of Monty Norman’s original Bond theme. However...

It’s just not a Bond score. It’s not over the top enough. Barry used to really make you feel the tension and pulled no punches in the fight scenes with trumpets, trombones and whatever else ballsy brass he had up his musical sleeve... and you would really feel it. Kamen, instead, delivers and slightly Bond flavoured Die Hard score... and it just doesn’t really rip into you the way it needs to. Now it’s probably not his fault, he was probably told to score it like this and, certainly, his own stylistic voice is probably something I’m hearing in this too... it just doesn’t feel appropriate or hit you hard enough, is my feel. And while I think Kamen’s score is perfectly fine, even excellent, as a stand alone listen... I really feel that with a John Barry score on it, the movie might have gained a little bit more traction with me... and possibly with it’s target audience too.

As it is, despite some well thought out action scenes, two of the most beautiful Bond women to grace the screen since Thunderball and Timothy Dalton’s beautifully played “hard man’s attitude” version of Bond, the film still manages to fall very flat. It’s not one I’d recommend and I think it says something that, when legal complications stopped the producers from making any more Bond films for six years after this one, I’d just assumed that it was because everybody was as disappointed with it as I was (apparently this did not have strong box office) and realised it was a terrible movie. So I was disheartened with the franchise once again... but things would be getting better once more. Brosnan’s era was just around the corner.

Dr. No
From Russia With Love
Goldfinger
Thunderball
You Only Live Twice
On Her Majesty’s Secret Service
Diamonds Are Forever
Live And Let Die
The Man With The Golden Gun
The Spy Who Loved Me
Moonraker
For Your Eyes Only
Octopussy
A View To A Kill
The LIving Daylights
Licence To Kill
GoldenEye
Tomorrow Never Dies
The World Is Not Enough
Die Another Day
Casino Royale
Quantum Of Solace
Skyfall
S.P.E.C.T.R.E
Posted by NUTS4R2 at 14:30