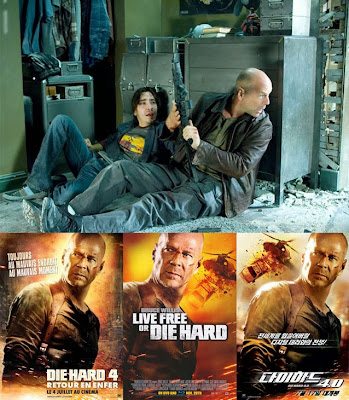 Warning: Spoilers exploding out of the paragraphs

Amazingly, when you look back at the way technology has progressed over the last few decades, mobile phones were not something that almost the entire population had with them back then. Only a minority of people would have them. In fact, in the first two films in this franchise McLane is shown to be “technically up there” in that, well... he has a pager.

It’s a good job mobile devices weren’t so prominent when it came to writing the scripts for those first three movies because, sad to say, technology has made their plot lines redundant in a modern world. In their first one, if McLane had been carrying a phone, he could have just called for police assistance and that would have made for one short movie. Ditto for the “communications outage” in the second movie. A quick call to one of the planes (oh, by the way, when you land, your sea level has been dropped by 100 metres) and the story is completely junked. And in the third movie, running around from phone booth to phone booth to get the next instruction.... err... yeah, right.

However, Die Hard 4.0 (as it is known in this country) was made twelve years after that initial trilogy. It is set in a world where the character and his ways are sadly out of step with the era. So what do the script writers do to balance the necessities of this character, in terms of giving audiences the kind of situations they are familiar with from John McLane... well, they make sure the phone networks are switched off as a part of the plot. A plot which is based on a newspaper article, in this case, and not on a random script or novel like the other sequels prior to this.

I remember thinking it was a bit late to make a Die Hard movie in 2007. I figured the writers would make a load of mistakes and concentrate purely on the action at the expense of plotting and character detail. Well... I was wrong (they saved making all those mistakes for the fifth movie, reviewed here). This fourth expedition for McLane is every bit as enjoyable as the previous installments (although the third movie is still my favourite) and, to boot, it’s the cleanest, nicest looking of the films to date with a beautiful sense of composition and some lovely colours pitched against each other in the shots. You might think this is at odds with the generally grimy milieu of the original films but, no, Wiseman manages to make it all work beautifully and, what’s more, it doesn’t just look good.

The plot is a little cliched in one hand... escort the witness (or hacker in this case) back to headquarters and don’t let him get killed. This plays out for the first third of the movie before the real story of a “fire sale” (the disablement of the IT systems across the city to render everyone, including all the authorities, pretty much powerless) kicks in properly and it becomes about McLane and his new hacker friend Matt (played expertly by Justin Long) taking on the bad guys and, incidentally, rescuing McLane’s estranged daughter Lucy (played by the always more than watchable Mary Elizabeth Winstead), who is taken hostage by the leading villains towards the end of the movie.

The story is really fine, putting McLane back in a situation where the odds are stacked against him and, also, there is the secret weapon of Kevin Smith (Silent Bob himself) playing a Star Wars obsessed super hacker who Willis also employed to rewrite the dialogue for his scenes. I gt a real kick out of seeing him in this and just wish he had a little more screen time throughout the film.

There’s one bad thing about this movie though... and that’s the credibility factor. Bruce Willis is fairly long in the tooth by now and, although he is in terrific shape, there’s no way you can really buy into him winning fist-fights with the likes of Maggie Q and Cyril Raffaelli (a man who, prior to this, I’d seen acrobatically beat up whole roomfuls of people with his bare hands as one of the two main action leads in the District 13 series). Sometimes the baggage an actor brings with him to a movie is good and, other times, it can strain credibility a notch, it has to be said.

But who cares, Die Hard 4.0 is brilliant, sometimes way over-the-top (jumping your car to take out a helicopter) fun and you still really care for the character and his friends in this one. There is one sad thing, however...

Michael Kamen, the composer of the first three Die Hard movies had already died tragically young by the time of this one. Here, the musical reigns are handed over to composer Marco Beltrami but, I’m happy to report, he does a good job. Writing in a modern action style while still weaving in some of Kamen’s original themes and ways of handling certain situations from the first three movies. It falls somewhere in between an homage to the late, great Kamen and a strong, appropriate score and it succeeds brilliantly on all levels. I wouldn’t have expected anyone to be able to recreate Kamen’s style all that easily but, in the scenes where that kind of respectful tribute to the franchise history is called for, Beltrami does really well and my respect for him truly went up a notch on this film. He does it even better in the fifth movie in the series. Nice work.

And that’s about all I have to say about this one. A great movie and a great Die Hard movie. Mission brief fulfilled. Job done.

You can read my reviews to the others in the series here...