X: The Man With The X-Ray Eyes 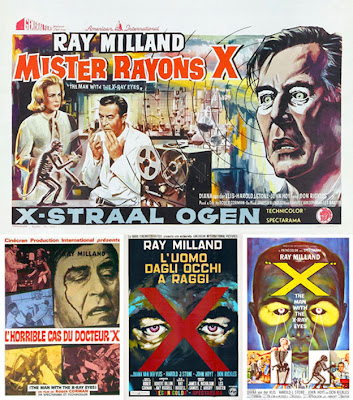 Warning: Slow, paralysing spoilers partially revealed,
the more you focus on this article.

Roger Corman directed X: The Man With The X-Ray Eyes right in the middle of his successful run of Edgar Allan Poe ‘adaptations’. The film was shot in three weeks but I don’t know how long the pre and post-production schedules were. What I have always wondered though is if Roger Corman and comic book writer Stan Lee ever knew each other at the time because X: The Man With The X Ray Eyes was released in September 1963, the same month and year as the first issue of Stan Lee’s new comic book of mutants with superhuman powers, The Uncanny X-Men. Both feature main characters who shared a particularly unusual last name - Professor X in Lee’s comic was known by the name Professor Charles Francis Xavier while, in Corman’s movie, the lead protagonist, a surgeon played by Ray Milland, is known as Doctor James Xavier. As far as I know, I’ve never read of the rather obvious and influential link between the two creations and the fact that they came out in exactly the same month suggests that neither of these was particularly influenced by the other... but, still, one has to wonder.

I saw the movie on an old black and white TV approximately ten years after it was made. I was about four years old at the time and I think it’s fair to say the movie made something of an impression on me. I was quite haunted by the imagery of it (even in monotone), in fact, and I’ve subsequently thought about this film a lot over the years. I’ve always meant to get back to it. After purchasing a, relatively cheap, out of print copy on the Midnite Movie label, I’ve finally caught up with it again after all this time.

It’s funny... there are some truly nice visual effects with Ray Milland’s eye make up in this movie. I remember his eyes being just black because I didn’t have a colour TV to see them when they were gold, before they were black (or the red inserts right in the final shot) but still the images stayed with me. I didn’t even realise the film had been shot in colour until I cracked it open again the other night but it was good to see it again after so long.

I have to admit that, even though the film had obviously scared/scarred me when I was an infant, all I could remember from the film were those famous shots of Milland with his black contact lenses in. And I have to say, it still really gave me chills when I looked at it again.

The film is quite interestingly put together considering that a) it’s directed by Corman and b) nothing much happens in it.

It describes the arc of a character who invents a chemical delivered onto the eyes with an eye dropper. This allows the user to see... so much more than what is normally available to the limited human spectrum. And the effect of the droppers is cumulative. There are a lot of really cool POV shots where we see through Milland’s eyes and, as he concentrates his vision more, layers are peeled back as we, like him, discover what’s underneath. Of course, this is a Corman movie... so you do get a sequence where everybody is dancing at a party and Milland suddenly sees them all nude... an experience which lingers when he is in the hospital but which makes no sense on a visual level, in that people are still able to be hidden by objects in front of them (for the protection of the delicate audience) when in fact, Xavier would not necessarily see anything in front of anyone. And so on.

Anyhow, Xavier ends up accidentally killing a colleague and tries laying low from police as a freak circus act and local healer... until his love interest finds him and comes to get him. He then goes to a casino and wins a lot of money by seeing “what’s on the cards” before being chased by police for cheating. In the ensuing manhunt he wrecks his car and goes into a church where a sermon is in progress. From there you get the final, somewhat chilling scene (to me, I know most people wouldn’t find it chilling at all) and really, that’s about all that happens.

Milland is flat and lifeless in some ways... I always find him like that. But still, Corman’s interesting set-ups and the hypnotic droning of Milland’s delivery actually are an interesting combination. Corman does some interesting things visually, asides from the trippy x-ray vision effects which were an achievement themselves at the time. For instance, asides from his old trick of leaving a door in the background open so you can see through to another part of the set to give the shots depth, the scaffold of a load of test tubes in Xavier’s laboratory is something which Corman shoots through at one point, framing his lead actor and actress (played by Diana Van der Vlis) in separate sections... which is rather fun. Although, it has to be said, Milland does set a bad example for kids everywhere when he lights his cigarette with the end of a bunsen burner.

Similarly, there’s a brilliant piece of transition work in a shot where he flees the hospital he works in from the police after accidentally pushing his colleague through the window to his death. The camera concentrates on his feet running down several floors of stairs while various newspaper headlines flash up over this shot announcing the police discovery and the fact that Milland’s character has fled... taking you into the future while still remaining in the shot of him fleeing the scene. If this wasn’t clever enough... the downward motion of his feet suddenly cuts you right into a similarly motioned POV shot from inside the carriage of a Ferris Wheel attraction at a fairground, which immediately establishes the scene and moves the action on to a point where Milland has already been working there for a while. It seems like a simple thing in the film but... well it kinda blew me away when I saw it and, when you think about it after, it is quite clever, catapulting you through three different time frames within the narrative in, maybe, less than fifteen seconds. Good story telling technique in a purely visual way. I was well impressed.

Which is better than the script in many ways... which seems to be a combination of flat, scientific gobbledy gook coupled with sudden and “so-inspiring-you-want-to-slap-the-actor” bouts of poetic dialogue like “The flesh dissolved in an acid of light.” Let that be a harsh lesson to all those kids in the fifties, sixties and seventies who sent off for X-Ray Specs from the adverts in their comics. And hey, helpful advice to future generations travelling back to my childhood and beyond. Those X-Ray Specs were just strands of cotton over empty holes... which made your hand look vaguely white like it was maybe bones. Don’t waste your money!

For a film that has nothing really happening in it... I found myself actually quite hooked on this one again. Maybe not as much as when I was a four year old but, still, pretty gripping. The film has an interesting and totally appropriate, somewhat atonal but pleasingly understated, horror score by Les Baxter and although some of the delivery by the main actors is flat (supported by some excellent Corman regulars doing their thing at various points), there’s enough going on to keep you watching. Plus the various contact lenses Milland wears towards the final sequences in the movie are... well... at the very least, eerie.

X: The Man With The X-Ray Eyes is Corman at his best and stands with films like Pit And The Pendulum, House of Usher and Tomb Of Ligea as opposed to his earlier shenanigans with movies like Attack Of The Crab Monsters (reviewed here). If you are into lurid science fiction which is happy to not over-cook the main concept and approach it from a, mostly, more subtle viewpoint than some of the other movies were doing in America at this time, then this one is definitely worth some of your time. And if you don’t like what you see? Well, if thine eye offend thee...
Posted by NUTS4R2 at 17:17