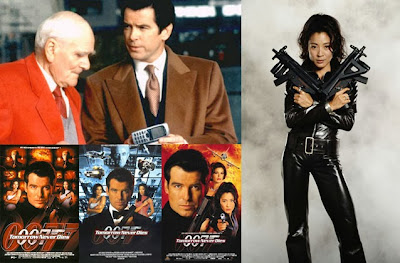 Died In The Wool

When I first saw this movie on the weekend of its release, back in 2007, I think I was overly harsh on it. Certainly, after the sheer brilliance of GoldenEye, I saw this as something of a pigeon step back from the full-on Bondness of that first Brosnan movie. At the time I compared GoldenEye with veering off in the direction of the kind of Bond films Sean Connery would have happily gotten away with making whereas, Tomorrow Never Dies feels like it’s trying to channel the look and feel of a Roger Moore era Bond adventure.

It’s not that I didn’t enjoy the flick, far from it, and I’ve certainly appreciated it more over the intervening years, but I can still acknowledge that my initial comparison, at any rate, still holds true. I think what I was responding to, though, more than anything, is the amount of action the people responsible crammed into this movie. It doesn’t exactly hold back in the spectacle stakes and, frankly, is definitely guilty of that old Roger Moore school of keeping the spy/detection scenes to a minimum and leaving them insultingly simple, and then use them merely as glue to hold all the action sequences together. Guilty as charged, I think.

However, I have to acknowledge also that it’s certainly far above the Moore films in terms of quality and ultimately, if you’re into well choreographed, well scored action sequences, then this is the Bond film for you. There’s loads of them. I think at the time I was lamenting the fact that the studios were up to their old tricks and trying to turn the Bond character into some kind of action hero again, rather than a spy character who has a lot of action thrown at him. The Bond films aren’t Die Hard, Lethal Weapon, Rambo or even Jason Bourne films... and there’s no reason why they should be (other than income I guess).

So what do we have here then?

Well, the gunbarrel music takes a different part of the Bond theme to the bit usually played in these sequences prior to this... that’s a bit of a blow really, but considering the outstanding quality of the musical score on this picture, I think I can forgive it that. The opening sequence is, once again, and this seems to be a trend on the first three Brosnan movies, one of the better opening sequences in the series’ history. Opening with Judy Dench’s M doing a double act with her old TV series co-star Geoffrey Palmer (which is something the American audiences may not have appreciated at the time but was a big laugh for British fans) we have Bond in contact with them and Colin Salmon (in his first appearance in the series as Robinson) via headset and video link, as he causes some well timed mayhem and havoc at an arms bazar, getting in and out of trouble and averting nuclear chaos at the same time. Like the film before it, a real humdinger of a pre-credits piece which also, again like GoldenEye, has a very powerful score.

The film has a passable opening title sequence and then goes from action strength to strength as Bond finds himself up against Jonathan Pryce’s Elliot Carver character, encountering actress Teri Hatcher (who was popular for playing Lois Lane in the TV show Lois & Clark: The New Adventures Of Superman at the time) and teaming up with famous martial arts star Michelle Yeoh for the rip roaring second half of the movie. It’s all very fast paced and has some especially well made action sequences, including a car park car chase (which was originally shot in Germany but didn’t work and so was then re-shot in Brent Cross Shopping Centre in London a while after) and a bicycle/helicopter chase where Brosnan and Yeoh are chained together (Yeoh was used to doing her own stunts and I’m guessing, like a lot of the Asian action stars used to not worrying about insurance in their own country,  she gets a bit frustrated by not being allowed to do absolutely everything herself when she has to shoot a Western financed movie). The film is certainly not as sedate as GoldenEye... but it does do its own thing and exists at a level which is not a hundred miles away from what Bond is about. It is quite stylish and if the dialogue sounds maybe just a little too polished in places, then I think I can cut it some slack as it’s an enjoyable old romp.

I’d loved Serra’s score for GoldenEye (as you can read in my review here) and I was annoyed that the producers hadn’t recalled him for this one to keep some musical continuity in the Brosnan era. I kept that grudge up until the Tomorrow Never Dies soundtrack CD was released, slightly ahead of the movie, and heard what composer David Arnold had done with the thing. It’s phenomenal.

It sounds a cliché now, especially because this is what Arnold himself was saying about what he was trying to do with the score when interviewed about it later, but the music in this film really does straddle both the music of its time and the 1960s Bond. It’s definitely a loving tribute to the style of John Barry’s great scores with a heck of a lot of what I can only called ‘Arnoldisms’ thrown in to boot. Bits of it even sound a little old fashioned... and then he’ll hit you with a bit of techno and fuse it all brilliantly.

One of the best moments in the score comes from the very start of Brosnan’s first action moment, where he literally delivers a “punch line” and then starts shooting. We are treated to a little Barry motif comprising two fast sets of 5 notes totalling a quick 10 note melody which, over the years has come to be known as the “Bond Is Back” sub-theme and it’s strange how that small piece of music has become embedded in the public consciousness in this time... possibly not in America, I don’t know, but certainly in Britain and here’s why. Although the only time this particular piece of music (which could almost stake a claim to being “the third Bond theme”... following swiftly behind Monty Norman’s The James Bond Theme and John Barry’s other famous sub-theme, the 007 theme) appeared prior to this was at the start of the opening titles of the 1963 Bond film From Russia With Love, this particular opening 10 note melody was played on nearly every trailer for any Bond film on our ITV channel for at least 20 years I reckon... and usually with a voice over narration declaring that... “Bond Is Back”. The melody makes a few appearances in Tomorrow Never Dies and I’m really pleased that Arnold brought this musical time piece back for the movie. I wish he’d take the time to do the same for Barry’s 007 theme someday.

The song is also a bit of an interesting deal on this movie. There was a kind of song contest for it and Sheryl Crow won. The song is brilliant and works really well and could almost... almost... have been the perfect song for this movie. Unfortunately, there was an even better song written for it by the score’s composer David Arnold, and performed by K. D. Lang which, even though Crow’s song is devastatingly cool, blows the one used at the front of the movie out of the water. Which is unfortunate because, honestly, Crow's song is Bond gold too, but I can only assume the producers went with Crow because she was very much in the public eye at the time. The thing about the song Arnold wrote for Lang, however, is that when he was writing the score to the movie, he used the melody lines from that song and you can hear its powerful brass and rhythmic melody all the way through it. Maybe it’s because the song was just too darned good that the producers let him change the title of it to Surrender (although in the chorus Lang still belts out the words Tomorrow Never Dies) and record it and use it as an end title song on the film. It really works well here too, of course, since the orchestration and melody reiterates phrases from the score you’ve been listening too throughout the length of the movie, but it’s a shame we didn’t get it at the front, with oddly choreographed and stupendously naked silhouetted women dancing around to it, is all I can say.

One other little oddity about the film deserves a mention. I don’t know if many people remember this... but I do remember how things were with this film back when it was being made. The pressure was on for this movie to be a hit, naturally, with the studios. But, bizarrely, after a few worrying stories highlighted by the tabloids in this country, all of a sudden the average British person on the street was worried about the progress of the film. It was really strange. People who had nothing invested in this were getting worried about the director being able to handle a Bond film and, you know, etc. etc. This got so bad that EON even called a press conference a little way into the shooting of the picture and had Pierce Brosnan allay everybody’s fears and calm them all down... saying the shoot was going fine and there was absolutely nothing to worry about. It sounds crazy, I know, but I remember it and it didn’t feel like such a bizarre over-reaction at the time.

The producers needn’t have worried. Even though it wasn’t quite what I wanted from the second Brosnan film, it certainly did the business and, I think, is a bit of a classic in its own right. It even, dare I say it, has one of the very best Desmond Llewellyn as Q briefing scenes in the history of the series. Possibly even the greatest of the lot, actually. Even though you can see Llewellyn is having to read half his lines off a note pad, the timing and laughs (and action) in the gadget briefing scene seriously rivals Goldfinger and maybe even surpasses it.

As I said above, if you love the Bond films and you really like a lot of, maybe too much, action in your movies... Tomorrow Never Dies is still a spectacular and witty movie which you’ll probably enjoy immensely. But the best, and possibly the last, great Bond film, was just around the corner...

Dr. No
From Russia With Love
Goldfinger
Thunderball
You Only Live Twice
On Her Majesty’s Secret Service
Diamonds Are Forever
Live And Let Die
The Man With The Golden Gun
The Spy Who Loved Me
Moonraker
For Your Eyes Only
Octopussy
A View To A Kill
The LIving Daylights
Licence To Kill
GoldenEye
Tomorrow Never Dies
The World Is Not Enough
Die Another Day
Casino Royale
Quantum Of Solace
Skyfall
S.P.E.C.T.R.E
Posted by NUTS4R2 at 19:38