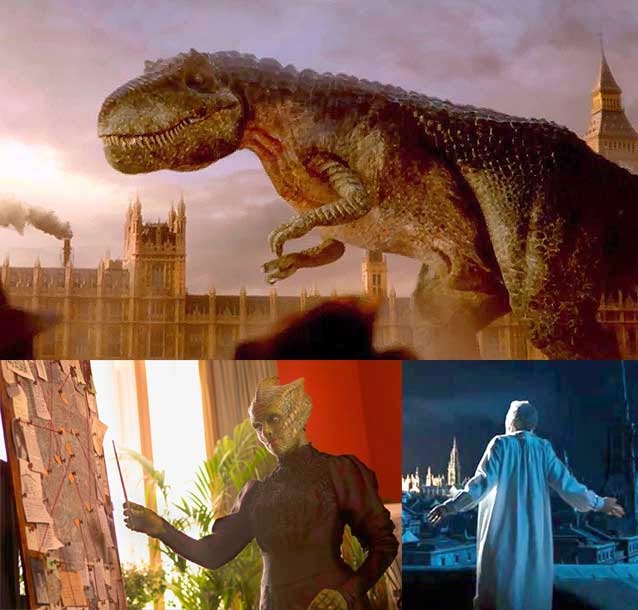 Warning: Take a deep breath as there are a few small spoilers.

Okay, so I‘ve had this blog for almost four and a half years now and I’ve been reviewing every new episode of Doctor Who that’s aired since this page existed. I think it was Matt Smith’s first episode which was the first one I reviewed on here and, of course, I’ve also reviewed various classic Doctor Who stories and the latest episodes of The Sarah Jane Adventures and Torchwood over my short reviewing lifespan (you can find them all by scrolling down past the movies and on to the TV show section of my general site index here).

I think I really began to get disillusioned with the show during the last two episodes of Tennant’s brilliant run on the series and when one of my favourite writers of the Eccleston/Tennant years, Steven Moffat, took over as show runner, I have to say the whole series suddenly became rather hit and miss as opposed to the almost consistent brilliance of Russel T. Davies’ regenerating stint on the show.

When I heard Peter Capaldi was going to be the new Doctor I have to confess... I’d never heard of him. In fact, other than seeing the movie Local Hero on rental video many decades ago, my only experiences of him as an actor was of his appearance in a Tennant episode of Doctor Who and, also, his character in the third series of Torchwood. So I had a certain regard for him as an okay actor... but he isn’t familiar to me from any other roles, I have to say.

So how did Capaldi do in his first full episode as the Doctor (he actually played him twice before, last year, in brief appearances in Day Of The Doctor and Time Of The Doctor, of course)?

Well... I was a bit underwhelmed by the episode in some ways, although not by Capaldi, not by the screenplay and not by the direction. Everyone, cast and crew, seemed pretty spot on in this. But it did seem to be a little slow moving at times and I think that’s more to do with me having unrealistic expectations rather than anything else. Much as I love, always have loved and always will love the classic Doctor Who stories, truth be told I’ve got kinda used to the young guys dashing around and delivering impossibly grander and grander monologues while running, jumping and saving the day in a mad rush of enthusiasm. Here, we have a much more settled and, somewhat, leisurely approach to the usual, “first time around in a new body” shenanigans from The Doctor and, more interestingly, we have the way in which the old companion deals with the new regeneration maybe held up to a spotlight and examined a little more closely than before.

The Doctor’s personality is a lot dryer than he has been of recent years so... that’s going to take some getting used to. This coupled with the pacing on this one is probably what I’m reacting to here when I say I was underwhelmed. He’s also a little darker and more ruthless in tone, I noticed, which certainly ties him into the original William Hartnell incarnation of The Doctor in some ways... so I’m cynical but hopeful that this less sympathetic version of the character will work out okay.

That being said, there was a lot of really nice spectacle, too, in this episode, not least of which is the incongruous but welcome “dinosaur in Victorian London” imagery... which worked rather well and, certainly, the giant reptile in question was a lot better produced than anything Jon Pertwee went up against in The Dinosaur Invasion. Although, it has to be said that the dinosaur’s final fate was wholly expected because of the way the script was written. When The Doctor goes into a monologue about seeing the dinosaur back to its own time safely you just know something bad is going to happen to it for comical effect. I was expecting it to just damn well explode as he was shouting at it and, to be fair, when it burst into flames, it turned out I wasn’t that far off in my assumption here.

The Paternoster Gang... Madame Vastra, Jenny Flint and Strax... were all back and that pleased me a lot. They are some of my favourite characters and I love the comedy writing that Moffat usually provides for this trio of infectious companions. I would still love to see a spin off series but, whatever the venue, it’s always good to see them in the show. I especially liked that the relationship between Vastra and Jenny was pushed a little into the foreground and I would like to see more of this in episodes to come.

We also had some other nice references to the show's past including links to Tom Baker’s era and a link back to Capaldi’s previous character in the show... including some implications which may tie in to the behaviour of the second incarnation of Romana, again from the Baker years, and a link back to the much loved The Girl In The Fireplace show from the Tennant era.

There’s also a nice, totally unexpected cameo from Matt Smith’s Doctor and a thread which I thought was important but forgotten about has also been revisited from a previous episode, which also featured the same time period and place as this episode. There was also a kind of trick ending which I’m not sure is supposed to be an almost rhetorical sense of closure or, if not, another of Moffat’s Russian Doll mysteries to unlock over the course of the show. Time will tell on that one I guess.

The one thing I’m not sure about yet is the new Doctor sub-theme by long standing composer Murray Gold. Both the David Tennant and Matt Smith Doctors had a very strong action theme which was often delved into as leitmotif and which really helped lift the show. The new Capaldi theme seems not as impactful or, at least, as easy to decode as his predecessors so, again, it’s something I’m hoping to get used to in time.

So... all in all this was a nice debut but really not one of my favourite episodes... although director Ben Wheatley did his usual excellent job with the material he was given. There’s a reason why he’s one of the countries most important movie directors at the moment.

In conclusion, all I can say about this new version of Doctor Who is... you can’t tell from just one episode and, with Capaldi being a great actor, or so it seems, I’ll just have to trust/hope we’re in good hands with this season and wait a bit and see how the rest of it plays out. So I’ll definitely be tuning in next week, of course, to see how that goes. Until then... alonzy.