Sin City - A Dame To Kill For 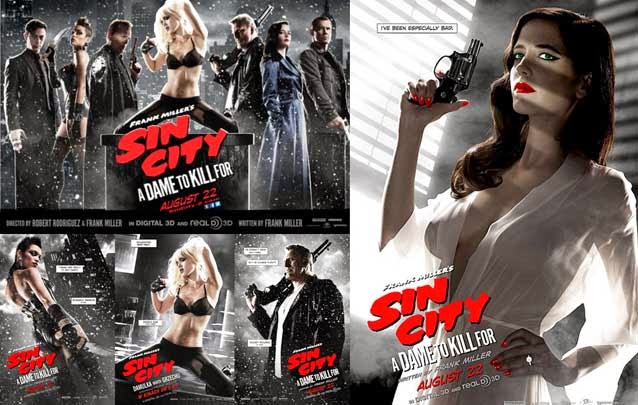 Warning: One slight spoiler to kill for here... although if you’ve not read the original comic then you may not even realise there was a twist reveal in this movie at all.

Okay, so I’ve not been to Frightfest much since it first started to be “a thing”.. I think I’ve been maybe four or five times only and two of those were for UK premieres of Dario Argento movies The Card Player and Giallo. The other one that sticks in my mind was back in 2005 and it was the first and last time, to date, I’d ever booked a ticket for a “surprise movie” at any festival. I hate the uncertainty of those kinds of screenings and on that one time I took a gamble that the surprise movie would be some kind of UK premiere of Sin City and... I’m happy to say I was right. It blew me away too. Sin City was a great movie and a faithful adaptation of Frank Miller’s original source material. A film I can watch over and over again throughout my life without getting bored.

I was kinda worried about the new film for many reasons, one of which is the fact that it’s now nine years since the last one and audiences seem to have short memories these days. I was also aware that some of the original cast had died, far too young (Michael Clarke Duncan, Brittany Murphy), and that it would be a shame having to see their characters played by different people. As it happens, that wasn’t as distracting as the one character I wasn’t’ that worried about having a change of actor for... basically because the original Frank Miller comic book it’s based on kinda dictated it. However, the way the “reveal” in the comic book is dealt with here is one of the very few false notes in an otherwise perfect second helping of the beautiful union between the semiotics of comics and movies that is the Sin City franchise.

Yeah, that’s right. Near perfect. I know this has done really badly at the box office already and I’ve astonishingly seen some bad word of mouth tweets on the film by people whose verdict on all things cinema I would normally trust. I really don’t know why this incredible wave of negativity is happening with this film though because, frankly, I had a blast with it.

It’s been said that the language of cinema and the language of comics are very similar. Both deal with the telling of events and incidents in a fashion perceived as linear, with comics using a series of static panels to do the same thing as films... but personally I think that’s a little too cut and dried. After all, what is film other than a series of static images projected at a rate the human eye can perceive as motion? It’s not a great leap from 24 frames a second to 24 panels a second. I think, for me, the rich visual language of comic books, much like the edgy subject matter they can sometimes tackle head on in a way that a commercially conscientious movie cannot, is far superior to the visual styles used in the majority of movies. You think it’s a case of film being like a comic book but actually it’s more a case of comics being visually closely allied to film... and then pushing that collision into other realms which aren’t necessarily the most expressive or appropriate ways to explore the territory they are trying to understand. Ang Lee’s Hulk movie, for example, is a perfect example of a film trying to be more like a comic book in the way that it encompasses a very similar visual language by using the background organisation of the printed comic page being split into panels and then finding a way to, sometimes very cleverly, use those panels to make a narrative which can speed up or slow down your perception of time as required by the confines of the story.

The first Sin City film followed the stark black and white colouring shot through with odd, bright colours highlighting various characters and objects which was used in some of the issues... although I seem to remember the original A Dame To Kill didn’t actually use any colour in it (if memory serves me correctly). Like the first movie, though, it serves to enhance the overall look of the Sin City branding and it’s certainly used very effectively. This film looks every bit as spectacular as the first movie in the franchise and, once again, Rodriguez and Miller have done a fine job of adapting this masterwork, even going as far as to graphically bring many of the comic book panels to life as almost “animated moments” like they were in the first movie.

I have very few complaints but one of them would be Jessica Alba in the role of Nancy. Don’t get me wrong, she’s an incredible actress and does a fine job here but... again, in Sin City: A Dame To Kill For, we see her obviously reluctant to take her clothes off like the character does in the comics and this really does kinda blow the credibility of Nancy on film in terms of someone who is an infamous stripper dancing in one of the sleaziest bars in Sin City. I love Jessica Alba as much as the next warm blooded guy or gal but, for such a crucial part, there really needs to be a lack of clothes, I feel.

My other complaint would be the character of Dwight, as played by Josh Brolin, who does very well in the part and bounces off of Mickey Rourke’s exquisite return engagement as “the tough guy’s tough guy” Marv in just the way you need him too. I wasn’t too worried about Brolin replacing the already excellent Clive Owen in the role of Dwight for the simple reason that, if you’ve ever read A Dame To Kill For, you’ll know that they would have had to have used a different actor for the majority of it. The story is set before most of the events that took place in the previous movie and so you get to find out why Manute has a bright yellow eyepiece and why Marv, and Goldie and her sister, of course, are all alive in this one. In the original A Dame To Kill For, Dwight gets his face changed after sustaining some fairly fearsome injuries and, when the bandages come off, he is revealed as the later version of the character which he was portrayed as in the previous comics/films. This is a great reveal and I was really looking forward to Clive Owen coming back for the last part of this movie as the Dwight we knew and loved in the first film.

Apparently Owen’s schedule would not let him return for his part of the role in this one. Now, personally, I would have waited him out because, although they’ve tried their best with prosthetics to make Brolin look like the version of the character Owen played earlier, when the bandages come off in the movie it kinda just looks like Brolin with a haircut that... really doesn’t suit him. This is the one thing that fails the movie big time, I reckon, because... if you haven’t read the comic, and most of the audience wouldn’t have... it doesn’t come across that Dwight’s face is supposed to be as it was in the first movie. Without Owen there to sell the illusion, the fact that there is even supposed to be a reveal here... rather than just Brolin with a scruffy mop top... is probably not something most people are going to pick up on. So that’s a real shame and, like I said, I wish they would have just delayed the film again and waited for Owen’s schedule to clear up. It wasn’t, after all, the first time this particular sequel had been delayed.

Aside from that though, Miller’s beautifully written noir dialogue and the heavy blacks and bleached out whites colliding with the reds, blues and yellows makes for another Sin City film which is pure visual poetry. And added to that you’ve got Joseph Gordon-Levitt playing a brand new character to the Sin City universe, Rosario Dawson back as Gail (although not nearly enough of this gorgeous actress as I would have liked to see... she’s always fun to watch and listen to) and the always stunning Eva Green playing the title character Ava, literally A Dame To Kill For. And I’ll tell you people who have an interest in this kind of thing up front... Eva as Ava goes through most of the picture not wearing much of any clothes at all, for the most part... so in terms of the celebration of naked femininity on screen, she more than makes up for the lack of Nancy strutting her stuff like she does in the comics... although I still think it’s a bit of a heavy credibility issue to have a stripper who doesn’t strip, to be honest.

The music to the first film was supplied by Rodriguez himself, working with composers John Debney and Graeme Revell. For this one, however, he’s working with a composer called Carl Thiel but, honestly, you wouldn’t notice any change because the music uses themes and orchestration which are the dead spit of the style of the first movie in the series and the continuity between the two of them is completely copacetic, I’m happy to say. I can’t wait for the release of the CD of the score in September so I can give it some play.

One last thing I will say though is this... I don’t know why this movie has had such a disappointing weekend but I do know that the Sin City films are absolutely the kinds of films that are meant to be seen at the cinema. They are what film is all about and they are little masterpieces of modern art that, if ignored now, will resurface and be reappraised in decades to come and your support for films like this is badly needed so future generations don’t turn around and ask us all, through the mists of time, why only two of these movies were made. Minor gripes aside, Sin City: A Dame To Kill For is an absolute corker of a movie and should appeal to true cinephiles the world over. Go and soak it up in all its 3D goodness on a big screen while you still can.