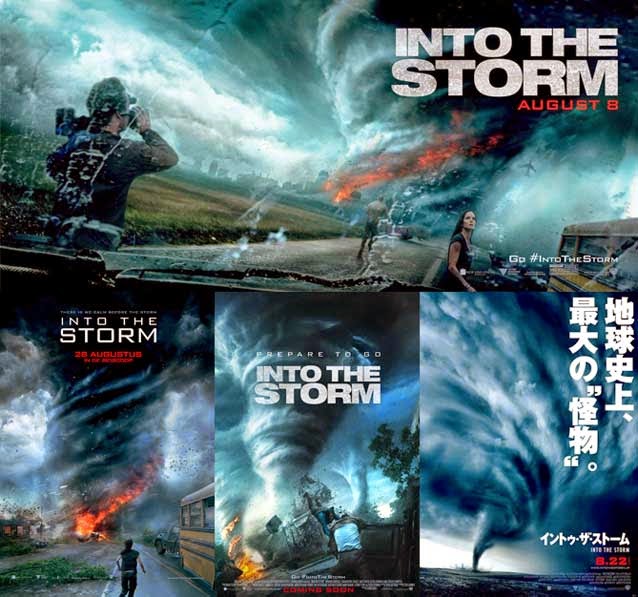 Dumb With The Wind

You know, I rarely ever go and see disaster movies. They’re just not my cup of tea.

I might occasionally get a hankering to watch something like The Poseidon Adventure or The Towering Inferno again but... that’s usually just so I can remind myself how Johnny Williams’ scores work within the context of those movies. And not even that justification can bring me to look at Earthquake again... although, I have to say, now I contemplate that thought, I realise I’ve not seen that since I was, like, five years old. So maybe I should remind myself about how awful that is again sometime.

The only disaster movies I’ve seen at the cinema in later years have been 2012, which I thought was a bit rubbish and The Day After Tomorrow, which I found curiously watchable. I’ve certainly not seen any of the big “windy” movies of our time like Twister or... I don’t even remember the names of the other ones to be honest. The last film I saw which had a tornado in it was when I was in my pre-teens and Judy Garland was whisked away to Oz inside it.

So, having now sited my credentials as being the absolute worst person to have any kind of perspective on whether or not this is a good disaster movie, let me try and win you back in the hopes that sheer common sense will carry me through as to my evaluation of this film. I don’t know why I wanted to go and see this one but I think it was just because the trailer managed to appeal to me for some reason. Those big passenger aircraft being picked up by the wind and the noise and fury of the hurricanes in the trailer looked like it was the kind of escapist fare I could get behind every once in a while.

Alas, although the film isn’t actually a disaster of a movie, as opposed to being very much a disaster movie, it also isn’t that great on certain things... so let me try and get the balance right here.

Okay, so the film seems like it’s 95% consisting of various camera records of the “events that take place” in almost the kind of “found footage” format that plays so well in popular horror movies at the moment. I say “almost” because there are shots and points of view in here which are... in no way... a found footage thing. Also, everything is edited together into a neat bundle and there is Brian Tyler’s excellent, but barely heard above the windy din, score playing throughout. Now I have to say, to their credit, at no time in the proceedings do the film-makers ever once say that this is a found footage movie... but most of the time it’s clear that the source of the shots used is either coming from any of a number of camera sources that one or more of the characters is holding or from surveillance footage.

It’s certainly not trying to be a blatant found footage movie, to be sure... but it does mean there’s almost 100% hand held shaky cam present as the main style of this movie and it does give a certain voyeuristic feel to the way the footage is captured and presented. On the few occasions the film shifts perspective from being filtered through a story-based source, it still keeps the style of filming and doesn’t jar with anything else before or after it. So that’s quite technically competent at the very least.

Now one of the reasons I did not have a good time with this film for something like the first 20 - 30 minutes of the running time, where all the situations are being set up for the audience, is because most of the characters here are totally unsympathetic. It’s like the accountants are trying to pitch the film at the “youngest audience with wallets” possible and, since they see young people behaving so recklessly and pointlessly through their daily routine, they maybe think we are able to sympathise with brats or thrill seeking, unemployed hoodlums. So for a while there, I was having a hard time finding anyone in the movie who I didn’t want to see sucked up into a violent and disorientating inferno of windy death... I certainly didn’t care if they all died.

That being said, there are moments in the film where certain characters do get your sympathies and it is, in some cases, almost like you go on a journey to find out what various people’s personal redemption story is. So there is some subtlety in places and the film does work as an ensemble piece as far as the acting goes... but it takes a while to get to the point where you are fearful for the characters and, for the most part, it’s kinda dumb and flimsily handled. Some people would argue that it’s necessary to go through the long and winding set up to be able to get to the point when the various character gears shift but, personally, I think I needed to be nearer to these people from the outset. Although the dumb hoodlum thrill seekers I could really have done without all the way through.

On the other hand, the special effects of the various hurricanes depicted in this movie are absolutely stunning and it's made even more astonishing when you realise that this is all that much harder to do when you’re filming with a “shaky cam” approach. I guess you have to track each frame’s displacement into the camera somehow and then allow for that as you’re putting the special effects on. That must be a fairly gruelling process, methinks. However, the spectacle is more than worth the time it takes (especially if the box office hits big numbers for the studio involved) and I was quite fascinated by the awesome sense of raw power you get from the artificially rendered “mother nature has a tantrum” in this film.

As a result of these effects and some of the characters beginning to grate a little less on the nerves (and common sense), there are some genuine moments of suspense and tension, especially in the last third of the film, which becomes all about rescuing two people who are trapped in a hole under a fallen building which is slowly filling up with water. There is a real sense of camaraderie from most of the players towards the end, as everyone (apart from the two hoodlum thrill seekers) pulls together and braves the danger of the multiple “tornadoes of terror” which are being constantly generated before they merge into one giant hurricane thingy, bigger than anything ever seen before (well this is Hollywood, after all).

Then, once it’s over, it’s over. There’s no sense, at the end of Into The Storm, that either of the possible girl/boy relationships hinted at and exploited to get your emotional invovement in the movie come to any fruition and you don’t feel like anyone’s really learned anything from the events they found they had to endure. At least I don’t anyway. It seemed kinda like a quick wind up for me. So as far as recommending this movie, I’m not sure what to say. I know many of my friends would not thank me for pointing them in the direction of Into The Storm and that’s probably about right. However, if your'e a fan of special effects and how these kinds of disaster movies can work in a cinema then you might find yourself having an okay time with it. Either way, the choice is yours. The answer, my friend, is blowing in the wind.
Posted by NUTS4R2 at 19:00