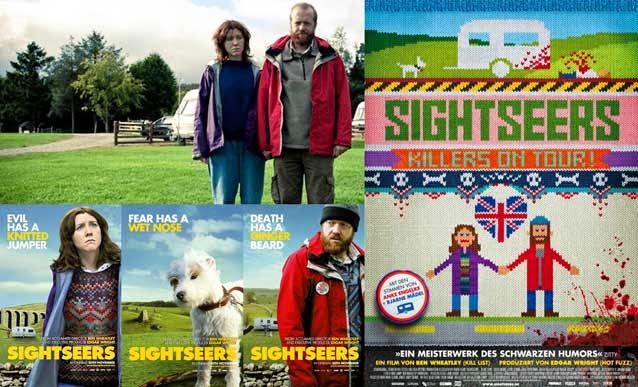 Warning: Some spoilers ahead on the route.

The only other film I’ve seen by Ben Wheatley was Kill List (reviewed here), which was brutally unpleasant in places and, by the time the final frames had played out, a bit of a masterpiece of modern British cinema, it has to be said. Sightseers is a different kind of movie to that one in that it’s pretty much a comedy but, even though it has a lighthearted charm all its own, it still has a raw, dark edge to the movie that, while it doesn’t confront you with anything too nasty, does leave you wondering how many people you know in real life hide a passion for murdering those they find even remotey annoying. Or more importantly, since I suspect the answer to that might be pretty high, judging by some conversations I’ve overheard in the wacky world of “commuting to work”, how many people are not able to keep that kind of angry impulse in check.

The film’s main protagonists, Tina and Chris, are played by Alice Lowe and Steve Oram and it’s interesting to note that these two actually co-wrote the screenplay, along with additional material by Amy Jump. Seeing as they get the credit for the movie in terms of its sparkling script, I’m wondering just how much of the dialogue was improvised during rehearsals and how much it was polished on the actual shoot. I don’t know anything about the work process of either of these two to be able to hazard a guess but I do know that, however this one was put together, there’s some good on-screen chemistry between the two of them and their contribution is really felt.

The film itself takes the form of a roadtrip as Tina’s new lover Chris takes her on a caravan tour of the English countryside, to include stops at a Tram Museum, a Pencil Musuem, the Blue John Cavern etc... much to the aggressive dismay of Tina’s mother. He is a budding writer and Tina is his muse, it seems, and the characters are down to earth and, basically, people you really wouldn’t mind hanging out in a pub with. However, it doesn’t take long before you realise that both of them are just a little bit twisted inside when it comes to certain things. When Chris “accidentally” runs down and kills a man for dropping litter and being rude, he gets away with it but there’s something not quite right here and after a while, Tina starts to catch on and realise that Chris has a penchant for solving his problems with fatal violence.

Ben Wheatley’s direction is both matter of fact in terms of the way it’s shot, with a lot of hand held camera, but also incredibly beautiful somehow in terms of the cinematography. It sounds like it should be a bit of a mismatch but it really isn’t. At least, not with Wheatley in charge it isn’t. Not quite sure how he walks that thin line between beautiful and ugly but he manages to capture it quite well. Of course, the breathtaking scenic joy of the English countryside is pretty amazing in itself and Wheatley nicely captures this. It’s the appreciation of this, and the affection that the two main protagonists share for each other, which allows you to not be completely alienated from them and appreciate the absurdist humour of their dark deeds.

There are some great comedy moments in here and I laughed out loud at details such as the way in which Tina realises that the second murder is, in fact, deliberate. Chris has taken his victim’s digital camera, which Tina assumes is his, and is looking at the pictures on the camera of their newly acquired (aka stolen) dog which she doesn’t realise are not shots that Chris has taken. Then she starts looking at the close up “naughty pictures” that she assumes he took of them the night before, when she was making love with him in her knitted bra and crotchless knickers... yeah, you heard that right. She has knitted, kinky underwear and, frankly, I don’t know why nobody has thought of this before... it’s fantastic. Anyway, as one of the shots comes up she looks down between her legs and goes mental, hollering at Chris... “This is not my vaginaaaaaa!” She automatically assumes that her new boyfriend has been having an affair but, no, as she clicks on she realises that Chris is a serial killer. Of course, after coming to terms with this, the relationship then starts to hit a snag as she does her own first murder, much to her new boyfriend’s dissapointment.

I won’t tell you where this goes but the film is not quite as formulaic as you might think, given the basic premise, although I did kinda guess what the final shot would be on this one (it’s a damned sight more penetrable than Kill List, that’s for sure). The acting, as you would expect from this kind of film, almost out of neccessity, is as great as the direction and cinematography and there’s some really nice musical choices on the soundtrack. I wasn’t completely blown away by the score on this one but it was certainly appropriate. I did find the choice of using two different cover versions of Donovan’s Season Of The Witch enthralling, though, and it’s rare that I find pop songs wedged into a film’s underscore as effective as these ones were, to be honest.

All in all, this was kind of the film I was expecting but without it slipping into the kind of predictable pattern I thought it would. It’s a charming piece of work from a cast and crew who really seem to have got their act together here. I’m struggling a little in this review, to be honest, because I don’t have a lot to say about a movie which is so well put together. However, if I did have to find anything slightly critical of it, it might be to say that the final sequences felt like they were just a little “rushed towards” at the end. I felt there needed to be a bit more repair and closure to the state of the relationshiop between Tina and Chris before the very last shot, if that would have been possible without telegraphing the final outcome too much (it’s one of those movies which could have gone either way in the last couple of seconds) so, I guess I would have liked another five to ten minutes towards the end, I think, to maybe give a sense of returning camaraderie, perhaps fanned by the fear that the police are closing in, before going on that final destination with the characters. But, honestly, that’s only because I enjoyed the characters so much and sometimes it’s easy to forget that great movies stem, not from their story, but from the way the characters are put together... and Sightseers is nothing if not a film about lovable characters. Unhinged and slighly round the twist, perhaps, but still lovable for all their faults. Faults like brutally murdering people with rocks and sticks, for example.

Sightseers is a truly great, little gemstone which reveals its dark treasures at a leisurely pace but without ever getting complacent by resting on the laurels of the main characters. The people these two encounter as they murder their way through the great outdoors are all good little character pieces in their own right and the tension and release between Chris and Tina as they try to get a measure for each other keeps you drawn in and watching intently, trying to catch all the little details, like Chris’s smirk to himself after his first murder or the subtle, unspoken messages between the two of them as their eye contact communicates their murderous intent to each other in the face of adversity. A nice little British movie which shows off our beautiful countryside and showcases the kind of quirky, and often grim, humour our country is perhaps best known for internationally. This one’s definitely worth a watch.
Posted by NUTS4R2 at 20:42