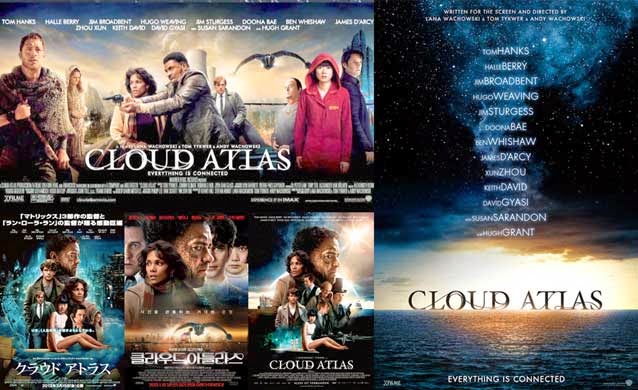 I remember wanting to see this, kind of, at the cinema when it came out in the UK in February of 2103 but there were too many demands being made on my time around then so I was forced to give it a miss. That’s okay though... this is why we have Computer Exchange stores across the land. So we can buy Blu Rays of the movies we missed at dirt cheap prices many months after the initial home video release has passed us by.

Cloud Atlas is one of those movies that is extremely impressive and full of mystery when you watch it. It’s a long film, nearly three hours, and it managed to hold my interest throughout the running time in a way which subsequent viewings possibly wouldn’t. That is to say that the intrigue generated from the initial conceptual set up is the driving force behind the narrative path, if it can be said to indeed have a narrative path, and once the intricacies of the connective tissue turn out to be, maybe, a little bit like the Emporer’s New Clothes in terms of its ultimate message... the film ends up being a little flat and without any real meaning to it by the finish of things.

On the other hand, a similar case could be made for such masterpieces as Citizen Kane, among others, so let’s not count this one out of the running either.

The film walks a very delicate and difficult path in that it maintains a cross cutting narrative that spans at least five, by my count, separate time zones in Earth’s history... past, present and future. How it does this is a remarkable achievement in terms of allowing the audience to keep everything in their heads without losing the plot and the film makers should be congratulated in this task. This couldn’t have been an easy film to shoot and, frankly, probably even less easy to edit.

It helps though that the colour palette on each segment is just a little different without being too at odds with the prevailing style (there’s a heck of a lot of deep focus photography in this thing) and the various directors use every visual and aural trick in the book to guide the audience into a cross cut jump from one time zone to another while trying to assure said audience don't, at first, notice that transition.

One of the most helpful things is that the ridiculous idea of having a heck of a lot of characters with several members of the cast playing several roles in different time zones, helps with familiarity through the actors, becoming a kind of visual cement to enhance the idea that life is all about ripples in time and connections between eras.

It helps the various directors in their visual chicanery quite well, in fact. For example, the director might use a cut on a shot, bringing to the main part of the screen a specific visual key point like an actress’ hand, with the camera panning around and holding it at the centre of one’s focus. The following shot might, for instance, mirror the speed and direction of the shot and continue with highlighting the same thing, sometimes with even the same actor, but after a while your brain catches up and you realise the transition has gone from the hand belonging to one character in the future to the same artist portraying someone in the past. It’s disorienting but, because there’s a lot of detail and visual indicators kicking in as a kind of aftershock on the consciousness, the transitions become seamless while your head catches up to the on screen action.

Similarly, the sound design is used in a manner which will help the brain cope with the various interpenetrating story transitions, such as the sound of horses hooves pounding against the ground metamorphosing into the rhythmic rumble of a steam train as it continues on its journey in a different chronological setting. These are all good tricks to use and the technical aspects of the film are all pulled off brilliantly.

What this does, of course, is allow the viewer to seamlessly cut between, not just different scenarios in time but, also, different shifts in tone. For instance, while most of the stories that play out in this movie are all quite serious and, for the most part, quite downbeat, the screenplay manages to juggle a kind of modern comedy routine of a setting and integrate it into the rest of the scenarios without shifting the tone of the various individual narrative threads, perhaps even enhancing those by contrast and their place within the overall structure of the film.

Asides from the tremendous acting performances and the amazing editing which often cuts on movement, the set design and overall art direction is absolutely brilliant. I found this especially noticeable in one of the “realms” dealing with earth in the future, where animated, interactive, desktop-style background wallpapers are used in the interior of buildings on the walls and floors. Animated fish can swim under foot, for example, and when a foot is put down a virtual splash of water accompanies this action. This is all great stuff and another impressive layer to the movie.

What wasn’t so impressive to me, in the context of the film itself, was the score by Reinhold Heil, Johnny Klimek and Tom Tykwer... at least not as it is used and lost in the mix. And while the score is probably stronger than I at first perceived, from what I hear of the on-line samples, it seems a pity to me that, for a film where a specific musical piece is used as a major thematic and transitional glue, the score should be so buried under the sound mix for a lot of the time. So that’s a bit of a shame (I'm actually listening to the freshly arrived CD soundtrack as I ready this review and can confirm that the score works very well as a stand alone listen).

My other main problem with the film, and I touched upon this in my opening remarks, is that it doesn’t really seem to be going anywhere. Okay, so we’re hooked in on the fact that various characters from different time zones are played by the same actors from the other parts of the movie and that certainly gets one’s attention. Similarly the concept of a running, comet shaped birth mark through the decades is also an interesting hook. However, at the end, there’s no prevailing explanation as to why any of these things are actually put in place in the first place. Some characters do share a certain connection but not enough to warrant the exploration of these ideas in the first place, it seems to me. The film doesn’t seem to have any real, underlying, central idea it’s trying to convey other than, maybe, everybody should love each other and all start trying to get along. There’s no attempt at anything like closure in the movie in terms of anything other than the conclusion of each, individual story within the narrative... no real effort is made to tie everything in other than by the use of random chance... at least that’s the way it seemed to me.

As an answer to that particular expectation of mine, which was the reason for my investment in the narrative in the first place, you might want to take the tack that a big screen entertainment is just that.. a big screen entertainment. I couldn’t really argue about that myself, other than to recall that the movie had maybe set up my expectations to expect something which had a specific point to make by the end of it. Now I’ve not read the original novel on which this movie was based (as yet), so I’ve no idea if the source story had a more concrete narrative goal and this maybe got lost in translation when it came to the movie adaptation of it. However, in terms of investing my time for almost three hours... I felt the film was a little flat and unsatisfying towards the end. Again, though, whether a movie is required to give this level of closure or whether it should be merely an empty spectacle is an argument for another time. I think there’s room in the world for both types, personally.

So there you have it. Cloud Atlas is a spectacular, attention grabbing film which manages to give a great deal of emotional empathy to the various characters and their situations, while still seeming a little bereft of anything really concrete to say about any of the issues it brings up, it seems to me. That being said, it is a great movie and if you can forget about the “puzzle solving” and reward aspect of the particular journey the filmmakers lead you on with, it’s a stunning piece of cinematic art, worthy of your time.  One thing’s for sure... you won’t find it boring.
Posted by NUTS4R2 at 19:46