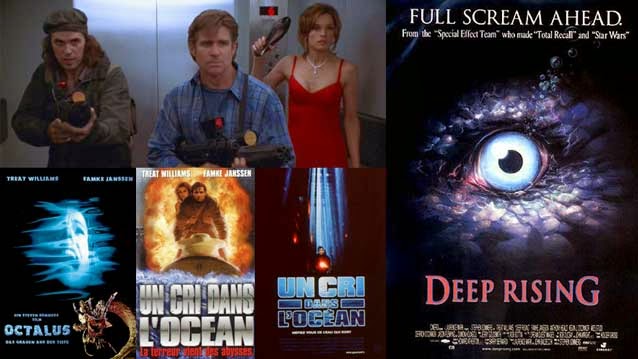 This film had pretty much been off my radar up until a month or two ago. I'm almost afraid to admit, once again, that my route into this one was through the music but... what happened was that Intrada released a limited number of an expanded edition of the score and it was a Jerry Goldsmith score I didn't already have. Now I've always loved the music of Jerry Goldsmith (even as a kid when I hummed his stuff before I knew who wrote it) and I was lucky enough to see him in concert maybe six or seven times in his lifetime. I don't buy all his scores but I have a good deal of them and so, once I'd listened to the sound samples, I decided I'd have to get that one soonest as it's a fine score from his late period.

This, of course, meant I wanted to find out about the movie and, when I saw two specific things about this film, I ordered a cheap DVD copy off amazon for a couple of quid. So, the two things which had, more or less, decided me on an instant purchase, asides from Jerry's marvellous action score? They were the words "sea monsters" and "Stephen Sommers".

Now, before this, I'd only seen four Stephen Sommers Movies in my life but three of those I hold in very high regard and the fourth one, GI Joe: The Rise Of Cobra, was at least enjoyable enough, if somewhat silly. I really loved this director, though, for the three movies I'd seen him do which, in all respects, were basically fun, retro B-movies but made with fairly large budgets - The Mummy, The Mummy Returns and the much maligned but equally groovy Van Helsing.

So, as I started watching, I was pleased to notice that this starts off in B-movie territory right from the outset, with a bunch of heroes for hire, providing a boat and cargo shipping and headed up by Treat Williams. They have been retained by a crew of villainous hijackers (including Jason Flemyng and loads of modern character actors) and their target is a cruise ship captained by another villain who is working in cahoots with the hijackers. A villain who has just caught a cat burglar type lady, played by the always lovely Famke Janssen, trying to rip off his own haul.

This already sounds like a collision course for a boys own adventure, of course, but remember that other word I said made me want to take a look at this movie? The two ships/boats (whatever) are both completely crippled by... oh yeah... sea monsters.

Great, many tentacled sea monsters resembling, somewhat, a cthuhuian elder race best spoken of in hushed tones in an old H. P. Lovecraft story. And so the film goes all The Poseidon Adventure for a little while and then you're left with two or three quarreling factions constantly at each others throats while everybody is trying to find their best chance of escape while avoiding being swallowed and slowly digested by the "tentacle of the week", so to speak.

And the best thing about this movie... apart from pretty much everything I've mentioned up until now?

Benny is in it.

That is to say, the wonderful modern character actor Kevin J. O Connor, who payed the weaselly Benny in The Mummy and the weaselly Igor in Van Helsing... plays the weaselly grease monkey on the side of the good guys (for once) named Joey. And, as I predicted, Sommers gives him some of the best lines of the movie. My favourite being a moment when the good guys, bad guys and the lovely femme fatale are stuck inside an elevator playing "canned music". Suddenly, a sinister and ominous sound is heard from outside the lift. "What is it?" asks Treat Williams' character John Finnegan. "The Girl From Ipanema" says Joey, referring to the elevator music. I think I chuckled just a little too gleefully at that one... even though I kinda knew he was going to say it.

Actually, one of the strengths of the writing of the movie is the way Sommers uses stereotype characters who don't need a lot of explaining. He hits the ground running and gives you just enough quick character info so that you can work out the dynamics of the relationships without feeling, at any time, shortchanged by the fact that there’s no real character development in the movie. It's formulaic writing but it does its job well and it does it quick... this is the essence of pulp writing and this is essentially a pulp movie we have here... and that's not meant to be in any way a derogatory comment.

Deep Rising is beautifully filmed with lots of long, slow swooping camera shots and appropriately placed dutch angles. A lot of it is set in dark or dimly lit, claustrophobic spaces but you never really fail to notice everything in shot and, luckily, the editing is anything but confusing too, although I think there were a couple of little "sequential errors" with the continuity.

Unlike the aforementioned Sommers' Universal Monster reboots, this has a higher BBFC classification and so the director is able to play the horror elements a little more edgier than I was used to seeing him do... backing up some of the suspense scenes with a few well timed pieces of goriness thrown into the mix. The CGI work on the tentacle monsters themselves is pretty good but the few smatterings of assorted nastiness also has some great effects work, with the walking, groaning, half digested former crewman being a particularly interesting achievement... if you're into that kind of thing.

So... a great ensemble cast of actors, glorious B-movie writing with some cool one liners, good camerawork coupled with more than competent editing, some nice effects work and, also, a pace that never really lets up. The cherry on top of the cake is, of course, that late period Jerry Goldsmith score which captures his style of writing from films like The Mummy, The Thirteenth Warrior, LA Confidential, Star Trek: First Contact and dozens of others of his later works which shared the same kind of building, rhythmic drives and sweeping, melodic invention. In other words, one of the great composers giving a larger than life B-movie action/horror score for a work that celebrates that kind of stylistic influence and which is wholly relevant to the proceedings (not to mention being a darned good listen away from the movie too).

If you like old, pulpy B-movies with cliched but likeable characters and a predictable but enjoyable storyline, not to mention a wet bike being chased through the decks of a flooded ship by a giant sea monster thingy... then you should probably put Deep Rising on your "to watch" pile. I'm really glad I did.