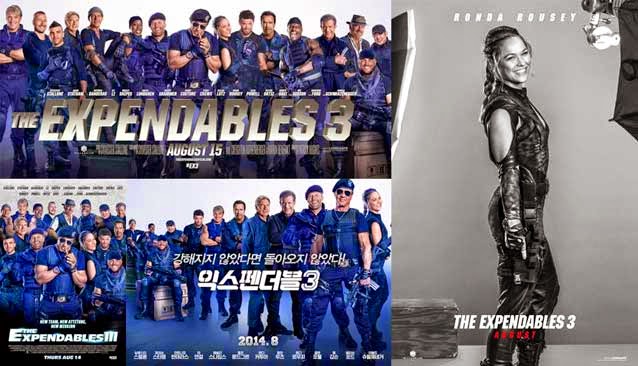 Well... this one kinda works well.

If you’ve read my reviews for The Expendables (here) and The Expendables 2 (here) then you’ll already know that I have a soft spot for these movies and the sentiment behind them. I have to confess to being a little worried about the fact that this one’s gone for a much lower age rating than the previous installments and I’ll stand by that and raise some points about that lower on down in this review but... all in all, The Expendables 3 kicks ass if it’s a nice big dose of action you crave.

The cast is as solid as usual and has the usual, additional names added to the roster... this time in the shape of Wesley Snipes, Harrison Ford, Antonio Banderas, Kelsey Grammar, Robert Davi and Mel Gibson (as the villain of the piece). However, there’s also a new, younger team of recruits and future Expendables in this and they were all pretty likeable in here too, with special mention going to the lady in the pack, Ronda Rousey, who has great screen presence in this and does the action scenes just as well as her colleagues. Imagine my surprise when I just looked her up and found out that this is her first feature film.

The story is about what you’d expect from an Expendables film. It’s simple, clichéd, not very challenging to your mental capacity and, basically, does what you’d expect it to do from the message on the tin, so to speak. And there’s nothing wrong with this. I think trying to graft a more intricate plot onto a movie which is basically trying to recapture some of the atmosphere of those late 1970s and early 1980s action movies would have been a delicate tightrope walk to pull off. This movie ditches any attempts to remake its original intentions in this manner and, frankly, the franchise doesn’t need to do that anyway. The film works well at its level and supplies pretty much most of the right ingredients needed to pull it off in style.

There are some casualties though.

Once again, Jet LI has what amounts to a cameo role in this, coming near the end instead of the beginning like the previous movie. Robert Davi is also underused as a minor villain, it has to be said, but it was at least nice to see him. I say this having always pretty much disliked the actor but I think that’s probably more because I identify him with some of the villainous roles he’s played in the past and so, if you’re paying attention here... that means he must be a pretty good actor. I’ve probably unfairly mis-judged him over the years and so, like I said, it would have been nice to see him as a more major villain in this one, I think. Gibson works well with the script he has, though, but I still preferred his turn as the villain in Machete Kills (reviewed here), to be honest.

It’s an entertaining movie, no question, but if I was asked to rank it compared to the others I think I’d struggle with its placing. I think it’s definitely better than the first one, for sure, but I think I can’t say it’s any better or worse than the second one. It’s kinda swings and roundabouts and here’s why...

Okay, there’s been much fuss made about it going for a toned down, lower rating to get more money in at the box office and, while I can’t blame the stupid accountants in Hollywoodland who are the enemy of art and all about making money, I think this was a bad idea on their part. The Expendables franchise has had a pretty hard edge to it in terms of the depiction of on-screen violence and, while the inclusion of the goriness and the exclusion of it in this movie neither, in all honesty, attracts or detracts from the overall experience of watching a fun, action move... it does have two big negatives for leaving the “blood and guts” factor out.

One of those negatives is that it’s almost an essential part of what has become The Expendables brand. It does run the risk of not quite seeming like a bona fide Expendables movie... almost like an A Team kind of romp instead. It’s one of the things that sets it apart from what most of the other films in a similar genre are doing and it’s a shame that it loses the roughness which highlighted it and gave it a certain style.

The other big negative about cutting out the gore, for me, is that in doing so the film does what a lot of big action movies do these days in that it pretty much glamourises violence. Frankly, when you show the goriness of, say, a man being literally cut in half by a barrage of machine gun bullets, with bits of his innards flying everywhere... you are showing a very real and horrible consequence of the act of violence. It’s not glossing over it in any way and it makes you think twice about the possibility of doing violence yourself. However, when you lose the bloody consequences of that violence and cow-tow to the censors, and there’s a certain irony here, then you actually end up making that violence look like a very attractive element of life. And while I enjoy action movies as much as the next guy or gal... I think it’s important that youngsters need to get a feel for the fact that violence is something a human being should use as a last resort and not go in all gung ho and guns blazing. Just my two pennies worth there but it’s another reason why I’m keeping my fingers crossed that the DVD and BluRay releases of this movie are released in a much harder cut.

On the other hand, this movie does work better in terms of the way the characters are, mostly, all interacting and, for the most part, getting a pretty equal amount of screen time. The ensemble nature of the first movie, which was one of its big strengths and which I thought got a little lost in the second one (even though I preferred the second overall) is back and it serves the delivery of the story very well. Stallone and Statham should definitely work together more and the team they’ve got here all seem to have pretty good chemistry which, in this script more than the last, comes more to the foreground. So that’s all good.

At the end of the day, I can’t decide if I liked The Expendables 2 or The Expendables 3 more and, frankly, I don’t care... because whichever way you cut it you’ve got a great little action movie which works well and, like the first two, has a marvellous score by Brian Tyler, a composer I’ve been really getting into the swing of lately, since hearing his scores for the fourth Rambo movie and Battle: Los Angeles. Bits of the score definitely sound like they’ve been recycled from the previous movies but that possibly means this one is pulling the leitmotif together in an exceptional way (I’ll be clearer about it when I get my hands on the CD, on that count). So, all in all, if you liked either of the first two movies in this franchise then, despite the ratings drop, The Expendables 3 really delivers the goods on what you are expecting from the trailer (even though my favourite Banderas line of dialogue from the trailer didn’t make it into the final cut, by the looks of it). Definitely one to go see if you like these kinds of movies. I’ll definitely be picking this one up again on the home video release, for sure.