Doctor Who: Into The Dalek 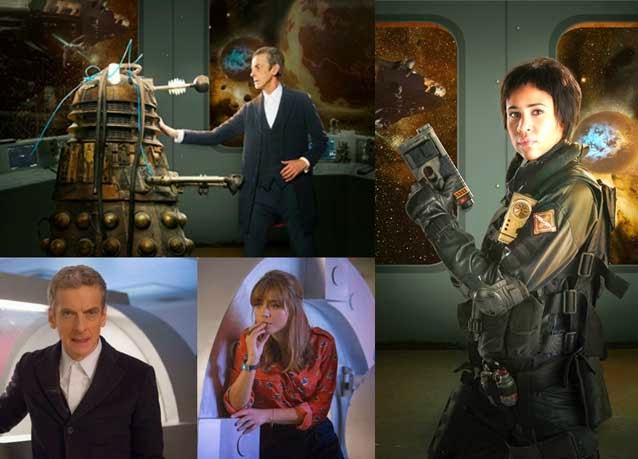 Okay, so after last week’s episode, reviewed here, I have to admit to being a little less than enthusiastic about watching the next episode in the show. Especially considering it stars The Doctor’s oldest and much loved foes The Daleks. You know, Tom Baker only went up against the Daleks twice and he was the longest running Doctor, to date, both in terms of years, number of episodes and screen time. Nowadays, the Daleks (not to mention the Cybermen, Silurians and Sontarans) are way over used as villains in the show. When someone like Tom Baker went up against the Daleks you knew it was a special event. Nowadays they’re everywhere. So that’s two reasons why I wasn’t really looking forward to tonight’s episode.

But you know what? I’m happy to report that tonights episode was a real corker. Not only did it give us something we hadn’t quite seen before but it also gave us a proper look at the way Capaldi’s version of The Doctor interacts with Clara without having all the usual regeneration angst getting in the way like it did last time.

Now, to be fair, the plot of this one was a little... well, it was a bit old hat. We basically had the lone, good Dalek concept which first raised it’s head in the first ever of Christopher Ecclestone’s encounters with the creatures when the show was initially rebooted (but in reality just re-continued) back at the dawn of the Russel T. Davies era of the show. This was then cross pollinated with a revisiting of the concept of the movie Fantastic Voyage (which was later novelised by renowned science fiction writer Isaac Asimov). The concept, where people are miniaturised down to enter the body of a person, in this case a Dalek, to make repairs from the inside of the host body is a popular one and this certainly isn’t the first Doctor Who story to revisit this concept. However, because it’s been used as a concept and fused with the aforementioned exploration of Dalek morality, asking some interesting questions and then making the answers to those questions relevant to the soul of The Doctor, the episode had a certain buzz about it that I really wasn’t expecting based on last weeks opening episode and, frankly, the last few years of the show.

The more interesting stuff was The Doctor’s new relationship with Clara which has turned from the flirting, flaunting of a younger looking Doctor trying to impress his travelling companion into a matured relationship where affectionate barbs are traded, Clara shows herself to catch onto things quicker than The Doctor and, in one nice moment, where Clara gives The Doctor a hefty slap around the chops. There are touches of River Song in her dialogue now because, presumably, since she’s met every incarnation of The Doctor in his past, her tone has changed to one of someone who knows the inner workings of somebody very well. So that was pretty entertaining stuff.

Equally entertaining is the introduction of someone who looks to be a new regular on the show, a soldier by the name of Mr. Pink, who is possibly the new love interest for Clara although, I don’t think this set up is really heading towards that, in all honesty. At least I hope it isn’t because, pleasant as that might be, it also seems a bit plain and simple for a show like Doctor Who and so I hope this is part of the beginning of a strange new twist to come. I hope I wasn’t the only one to notice that both Clara and said Mr. Pink are both teachers at Coal Hill School. I don’t think this is the first time it’s been mentioned that this is where Clara works now but the significance of that particular school, for those who didn’t catch it, is that it’s the school where Susan, The Doctor’s grand-daughter in the first ever episode of the show, was a student. It’s also the work place of his other two companions from that first series of the Hartnell years, Barbara Wright and Ian Chesterton. So this is all very interesting but I doubt if that particular one is going to be a sleeper plot element anytime soon. But again, we’ll see what happens.

Now, there were some bad things about this one in terms of continuity, I thought. It really doesn’t take a group of Daleks that long to wipe out a group of humans on a spaceship, for starters. Nor is it all that credible that a single, lone Dalek can take out eight or nine of its colleagues without being taken out itself. And as for the Dalek antibodies in the episode, another nod to the movie Fantastic Voyage, well the logic of the way they behaved didn’t really make a lot of sense in some scenes. It’s like they behaved in one fashion when it suited the script and then in a completely different way when it was needed that they should. Now I may have been distracted and am missing something there but... that was my initial impression of it but, really, these criticisms are only minor quibbles in what was an otherwise brilliant episode.

And we still have the more obvious set up scene, continuing on from last week, where the mysterious Missy is collecting the souls, bodies, after images or whatever of the people who find themselves dying around The Doctor. Now there has been some speculation that Missy is a female incarnation of The Master. Maybe, I’m not so sure, to be honest. I’m still wondering if we’re seeing the beginnings now of the woman who we came to know in later life in the Matt Smith era of the show as “the eyepatch lady”. So we’ll have to see what happens there... kind of too early to tell right now. I don’t think she’s going to turn out to be a version of River, after she was saved in The Library Of The Dead but, then again, who knows?

What I do know is that it was a brilliant episode, Capaldi has really found his feet very fast, Clara has great chemistry with him and the music on this one was pretty cool too. So that’s really good news as far as I’m concerned on this one because, frankly, I was kinda expecting really bad things from this series. But... quite the opposite. I’ve not been looking forward to next weeks episode, Robots Of Sherwood, with any amount of enthusiasm but maybe now I am willing to approach it with a little more of an upbeat twinkle in my eye. We shall see what we shall see. Until next time...