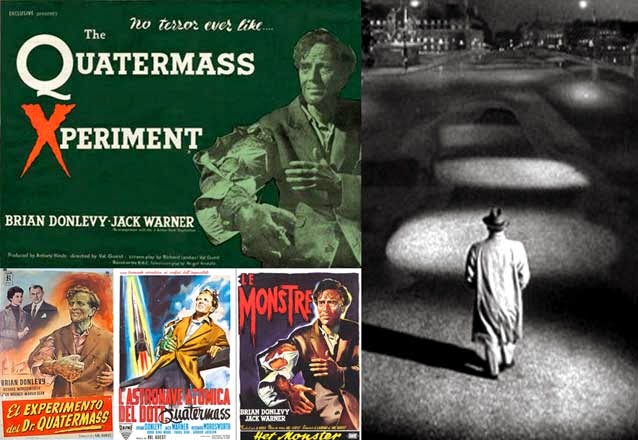 The Quatermass Experiment, the original TV show on which the Hammer adaptation The Quatermass Xperiment (with no ‘E’) was based, was quite a phenomenon in the UK. I remember my dad telling me when I were a lad that the power went out in some areas of the United Kingdom on the last episode’s broadcast because of the amount of people rolling in from the pub and turning their television sets on to catch the latest installment. My parents also used to talk about a really big plant they had, well before my time, which the family had called Victor, named after the Victor Caroon character in this first Quatermass adventure.

I also remember that, when I saw this at around the age of six or seven years old, staying up for a late night TV showing, it was this film rather than the various Universal and Hammer Dracula and Frankenstein movies (which I could handle with no problem), which actually gave me nightmares and kept me up at night. Although the genius storyteller Nigel Kneale’s original script was completely condensed and rewritten for the Hammer adaptation, there was still the compelling concept which haunted the mind after the film had finished, at least when you’re a kid, and so it’s little wonder that this and the third movie, Quatermass And The Pit (reviewed by me here), broke me out in a cold sweat during the middle of the night, as a child.

I’ve since seen the remaining, surviving two episodes of the original serial when they were screened a few years ago at the BFI and, of course, on the subsequent DVD release of those surviving episodes... plus the sequel serials. The original, from what I could tell, was quite a different beast in that the whole idea of Quatermass “talking down” a creature that had the consciousness of his previous, absorbed colleagues was kind of lost in the film version. And, of course, in the way the lead protagonist was played... Nigel Kneale’s own hatred for this production and, in particular, of Brian Donlevy’s “out of character”, bullying version of the good Professor is fairly well documented.

This doesn’t, in any way, make it a bad movie, however. Far from it in fact. It’s one of the great triumphs of 1950s British sci-fi/horror and, if it hadn’t had been, then none of the sequels would have been made. If you’re wondering, by the way, why the movie version has such a funny spelling to it, it’s because the distributors were playing on the fact that after the introduction of the X certificate (replacing the H certificate) in 1951, this was one of the very first homegrown products to bear the rating (many say the first but I believe there’s a lot of argument still about that and I really would like to see some better, or at least credibly clear cut, research and eveidence on that issue).

The film itself, as the original serial did, starts off as one of that particular genre of great detective fiction variants... the “locked room mystery”... although I don’t remember ever seeing it credited as such, to be honest. Nevertheless, it is one and the initial basic and compelling mystery... how did two of three astronauts in a spacecraft disappear from a locked spaceship with the suits still left behind and linked to the ship... is itself a lead in to the escape of an alien/human hybrid creature when the film goes into police/procedural manhunt territory for the second part of the story... as the surviving but silent astronaut, Victor Caroon, begins to absorb and consume various plants and people until he turns into a deadly tentacle monster capable of destroying the Earth.

And of course, if you’re going to go on a manhunt, who better to have with you than Dixon of Dock Green himself. Yes, Jack Warner plays Inspector Lomax who, along with Quatermass’ help, runs the creature down to some scaffolding at Alexandra Palace where a live television performance is being transmitted... much to the dismay of a young Gordon Jackson as the show’s producer.

This film got its reputation, and its popularity, because it’s well acted... everyone is deadly serious and you can easily suspend your disbelief when you see reactions and deductions made by such a hard working bunch of characters... and also because the direction is superb. Val Guest does some incredibly atmospheric stuff here including a shot where he carries on a conversation between two people by just listening in on them off screen as his camera focuses through a window in the next room and we catch Victor suddenly sitting up to full consciousness while his wife sleeps. The tension created by the fact that we know something is going to happen and the bickering of the conversation really works and it’s such things like this, which serve to highlight what might otherwise be considered minimal horror, that really make The Quatermass Xperiment worth watching.

There’s a wonderful sequence where Quatermass and co are finally watching the film developed during the spaceflight of the rocket that was sent up before crashing back to earth at the start of the movie, and tension is ratcheted up because every now and again the camera cuts out deliberately to save film on the journey... so that is used as a device to create tension between glimpses of “what happened”, which is vague anyway (to say the least) and also to create pace for the playback, of course... all the boring bits are cut out and we just get the highlights.

In terms of composition it’s also a very attractive package. The black and white 4 by 3 aspect ratio is very well accommodated by director Guest, who does some interesting things including using the actors heights to suggest diagonals. In one particular case, when tests are being done on Victor, he uses the seated subject framed by three other people of verying heights to make a V shape which is then disrupted by the camera following two of the characters. When just those two characters come back onto shot with Victor, we get an inverted V shape as a kind of visual answer to the shot a minute or so before... very nice.

There’s also a brilliant moment where Quatermass is investigating inside the crashed rocket and he turns the handle of a hatch and the Dutch angle that the director has been shooting from rights itself  to rotate to a normal angle in time with the motion. Guest also uses some “point of view” shots from the monster’s perspective at one point... probably not an innovation at the time but I’m guessing it wasn’t a common choice either... at least in terms of British made monster movies of the time.

This is all good stuff and the minimal but excellent scoring by someone who would become one of Hammer’s leading composers, James Bernard, fits the film perfectly... possibly sounding a little over the top to modern ears but never really breaking the mood. In one specific scene the composer really scores (if you’ll pardon the pun) by pitching the music in a shrill wail which drowns out while continuing and emphasising the screams of Victor’s wife in the car as Victor reveals his hand has turned into a giant, lethal, cactus like thingamajig. This is powerful stuff and tends to jump right into the subconscious... I confess this is about the tenth time I’ve watched the movie in my life and I only noticed he was doing it this time around.

What more can be said? The Quatermass serials and, to a lesser extent on a national level, the big screen adaptations of them, were a huge influence on British viewing habits and it’s probable that without the original version of The Quatermass Experiment, the climate which produced such long running shows as Doctor Who would never have been there... so it’s an important work, far beyond the mere fact that it’s as entertaining and effective as hell as a great piece of 1950s sci-fi/horror hybrid. Shows like the aforementioned Doctor Who still, to this day, slip in references to the Quatermass legacy and American director John Carpenter also acknowledges this influence from time to time.

Bernard Quatermass is one of Britain’s greatest science fiction characters and this Hammer adaptation called The Quatermass Xperiment, originally known in the US as The Creeping Unknown at the time of it’s release over there in 1956, is the movie version that brought him to the attention of the outside world. The original sequel was stopped by Kneale as a genuine sequel and character names changed before the rights to Kneale’s second serial in the series, imaginatively titled Quatermass 2, was put into production. The film originally intended as a sequel went ahead anyway with Dean Jagger in the role of.... ahem... Doctor Adam Royston and my review of that production, X - The Unknown, can be found here.

If you’re a fan of science fiction or horror and you’ve never seen any of the Quatermass films or serials, then you should probably be ashamed of yourself but you should definitely make amends and seek this stuff out as quickly as possible. There’s a reason why films like this have become classics and it’s all up there on the screen. Scary stuff when you’re just a kid... creepy enough when you’re a little older.