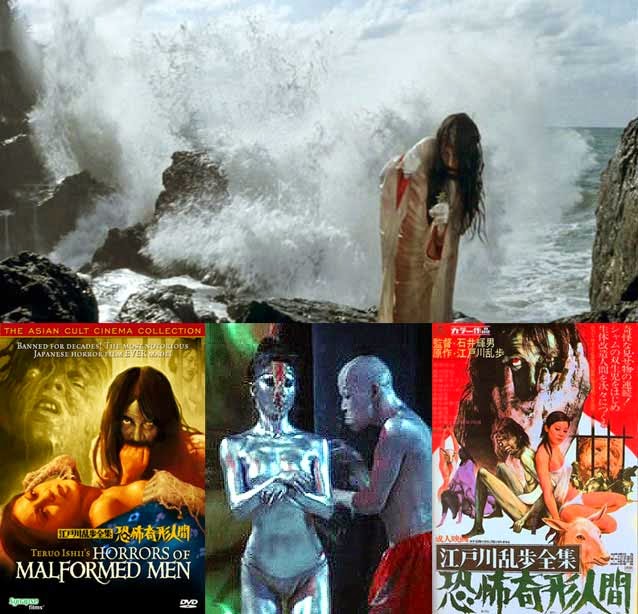 Well this is a bit of a strange movie for me to attempt to write a coherent review for... I think, mainly, because it really wasn’t the full-on, over the top, exploitation movie I’d expected and because it works at a more subtler level which, I confess, I was unprepared for on first viewing.

Horrors Of Malformed Men is a movie directed by Teruo Ishii, who also directed two of my favourite Japanese exploitation movies, Female Yakuza Tale (aka Story of a Wild Elder Sister: Widespread Lynch Law) and Boachi Bushido: Code of the Forgotten Eight. It is a tale of grotesque body transformations due to a mad man’s tinkering with an island full of women which is very much in The Island Of Doctor Moreau vein in its presentation and with the lead villain of the piece played by a controversial leader of the avant garde art/dance movement in Japan at the time, Tatsumi Hijikata.

Although H. G. Well’s novel and its subsequent cinematic translations, such as the much lionised Island Of Lost Souls, may seem to be a strong source and an easy mark to compare this to, the film was actually based on a number of stories by a prominent mystery and macabre writer who’s pseudonym, Edogawa Rampo, is an homage to the American writer, one of my favourites, Edgar Allan Poe. This film takes various parts of Rampo stories such as The Strange Tale Of Panorama Island, Ogre Of The Secluded Isle, The Human Chair (in a particularly surprising story reveal) and Walker In The Attic. Another of Rampo’s works was apparently taken as the source for the brilliant movie Blind Beast (which I reviewed here).

As I said, the film is not a full-on exploitation fest like I was expecting, especially from the director of the aforementioned Boachi Bushido: Code of the Forgotten Eight, but it has a certain slow burn quality all it’s own which keeps you watching from the start of the movie, with a room full of threatening, half naked women intimidating the main protagonist in an asylum cell (complete with dodgy, rubber bars, it would seem), right through to the literally explosive end sequence which made me wonder, without giving too much away, if Brian De Palma had managed to somehow see a print of this (then banned) movie prior to making his movie version of The Fury.

The film is slow and the camera movements fluid and assured, with Ishii using various verticals, like those bendy prison bars, and horizontals to split some of the shots so you get the kind of frames within frames kind of effect which was often associated with the films of Sergio Leone. The colour schemes start off as fairly naturalistic or, perhaps, just very diluted compared to what comes later, as Ishii slowly suffuses the film with a sense of lurking horror and touches of surrealism as we slowly walk, not run, to the gradual revelation of the mystery that lies at the film's heart.

At a point when the lead character, who is the double of another deceased character who had the exact same birth mark, a swastika on the sole of the foot, comes to an island to meet someone who can really tell him what’s going on, all hell breaks loose as the human experiments, played by, often naked, dancers from Hijikata’s “butoh” movement, are brought into the light and the film switches its colours and hues and gets into a fully psychedelic palette which would have been heartily approved by such directors as Mario Bava or Dario Argento.

It’s interesting that, rather than relying on special effects, or even real life actors with deformities, Ishii goes about suggesting the “hell on Earth” of Hijikata’s character’s creations of the flesh as expressions of dance and colour. You don’t feel the need to look away from any of the creations on screen and I suspect some viewers may find these sequences fairly pedestrian in comparison to the collective heritage of our cinematic past such as, say, Tod Browning’s Freaks. However, as the beauty of the colourful expressionism passes by in a carnival-like procession of sideshow exhibits, the lurking horror beneath the intent of the main antagonist and the way in which the various protagonists find themselves sharing his personal history does give you a sense of a game being played for high stakes... which, of course, immediately puts you in the position of taking sides again and rooting for those who are, if this word if applicable in films of this nature, the good guys and gals.

There are also moments of a slightly more full-on horrifying nature such as a scene where a chained woman, who later comes to have some significance to the “hero” of the piece, is seen greedily devouring the crabs who are stripping the flesh from her dead lover, who is chained beside her. Moments like this also have a somewhat neutralising effect on the sheer beauty of the way such scenes are shot, edited and presented which does tend to set alarm bells of unease in the back of the brain as you find you can’t look away from the events taking place on screen... often accompanied by musical highlights played out as punctuation of a Jew’s harp which might, at times, put you in mind of a low key kind of Spaghetti Western score, if the images on screen weren’t such a far cry from that kind of cinematic iconography.

Horrors Of Malformed Men is a slow but no less disorienting assault on the senses and one which will probably stay with you for days to come after you’ve seen it. It’s a bit of a meandering masterpiece of exploitation rather than, as I said earlier, a more overt form of the genre, but that doesn’t rob it of any of its power, of course. Far from it, it becomes a more haunting evocation of the celebration of the lowlights of humanity and, perhaps, a more potent one for it. If you’re into these areas of Japanese cinema, then you probably shouldn’t let stuff like this pass you by. There’s a nice version out on American DVD by Synapse which is still around at the moment and the beautiful transfer of a very clean print and the accompanying extras are well worth the price of admission, I think. Put this one on your list, if you’ve not already seen it.