In The Nick Of Time: Motion Picture Sound Serials 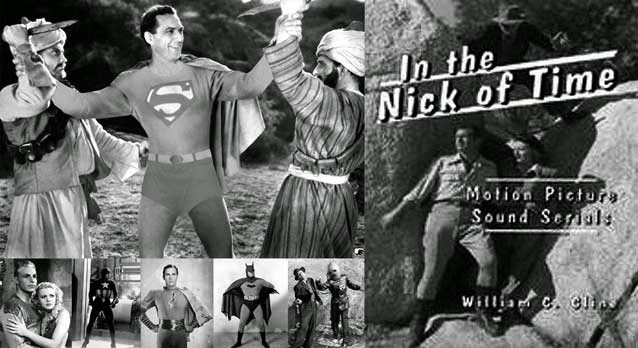 I was really looking forward to reading this book when I initially bought it. I’d already read one pretty good book on serials, The Great Movie Serials: Their Sound And Fury (reviewed here), and, although I enjoyed it greatly, I felt it was lacking in some areas for a number of reasons, not least of which because the serials which are available to us now on home video systems were not readily available to the writers of that book in 1973. It was still a great read, however, and I was looking forward to reading what I thought would be a, relatively, modern take on the genre, looking at the components and key themes of these chapter plays in a more critical and enlightening manner.

However, what I didn’t realise is that this is actually a reprint of a book which was originally published in 1984, so although the writer would have possibly had a little more access to his subject matter, the book doesn’t really break down the form of the serial in a way which might have been more useful. To be fair, it does analyse aspects of the chapter plays to a certain degree, but I did find this one a hard and, in some ways, monotonous read for large sections of the book.

Now I fully comprehend that the author did, in fact, see pretty much all the serials he talks about and was in a unique position to do so for some of his time as a cinema programmer. This is not in question. However, I did find it hard to read that, according to the writer, serials were primarily aimed at the juvenile end of the market and that the reason they are neglected by many is because they are not sophisticated enoutgh to hold an adult audience. While I can tentatively object to the first accusation on the grounds that I’m pretty sure expensive serials like the Flash Gordon series were as much for adults as they were the children, I can certainly raise the issue that an adult appreciation of all art forms, whatever their primary market, is not without reward or interest and certainly I am able to enjoy the format, formulaic as it is, from a modern context as much as I can from pitching my viewing to a historical perspective... albeit with a different level of appreciation juxtaposed with the initial thrill of the action.

Nevertheless, the author may have got off to a bad start with me but at least he is passionate enough about the serials that he’s written at length about them. Like the earlier book I read on serials, In The Nick Of Time: Motion Picture Sound Serials eschews any real glances at the early silent film serials, instead choosing to pitch its tent firmly within the era of the talkies... although the way the subject is organised, it could have easily been used to cover both forms, I suspect.

My main problem with the book is, although it is split into dedicated chapters on specific tropes of the serials such as heroes, sidekicks, leading ladies, villains etc, it mostly reads like a series of lists strung together to pass for sentences. Extremelely detailed lists, granted, but also not very interesting in that they seem to be saying such stuff as “actor x played this kind of character in serial A, serial B and Serical C, totalling y number of serials for this company and z number of serials for that company”... before just moving onto the next person in another paragraph and repeating this kind of exercise throughout. It doesn’t breakdown the serial formula to specific story arc styles so much, or refer to the psychological reasoning that brought certain kinds of serials to our screens and, much as some of this book was quite informative, it’s really not the critical study of the form I have been searching for so far (although, if anybody knows of one, please either tweet me or pop it in the comments section at the bottom of the page).

To be fair to it, some of the sections are quite valuable taking this kind of approach, such as the one on score composers, but when I did find something as interesting as this, I found it not going into enough detail on the subject... possibly for a lack of research resources in this kind of area (the composers were rarely credited and most of the serials recycled music from here, there and everywhere, including cannibalising their own past successes... although the part about why the Spy Smasher music was like it was is something I found very interesting).

And there, I think, lies the nub of why I just didn’t get as much joy from this tome as I thought I would. For the casual reader who is interested in these things, there’s probably way more irrelevant detail than required but, for the reader who wants to explore these in more depth and gain more of an understanding of just what made these chapter plays tick in the way they did, there’s maybe not enough focus in those areas... it has to be said.

However, you have to respect the author of this work because he certainly knows his stuff and, for the time in which this was written, this was probably an essential addition for any cinephile’s shelf. By no means a hard recommend from me but, since there’s not exactly a glut of books on this unique form of cinematic entertainment, it’s possibly one you might want to welcome into your hands at some point, if you have no others on the subject. An honourable attempt with, I hasten to add, a very valuable and lengthy reference appendix detailing every sound serial shot and released in any given year from 1930 to 1956... so if you need an essential checklist of sound era serials, this book has it.