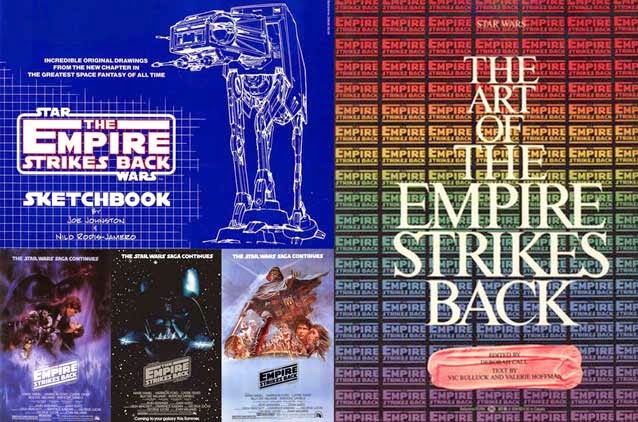 So the first Star Wars had a considerable impact on the Western world. Adults and children alike were seemingly talking about nothing else for the three years we had to wait for the sequel. I remember I must have read those two volumes of Marvel Treasury adaptations of the first film about 50 times in the intervening years... along with starting my big ring binders full of Star Wars sketches, articles and notes. I even “published” a single issue of a science fiction magazine for some of the kids at school... armed with my mum’s typewriter, some scissors to cut photos out of the newspapers, some glue to stick them down on the page next to the type and, with the help of the photocopier in my dad’s office... I put out something that would look amateurish by today's standards but was looking pretty good to me as a kid. I think it would be safe to say, and this may have even been a tag line on one of the posters, that The Empire Strikes Back was “the most eagerly awaited sequel of all time”. This in a time when sequels were no longer a standard thing in Hollywood.

It’s interesting but, in those days, the notion of having spoilers was not really an issue. I think Hitchcock had started a publicity campaign for not spoiling the ending of Psycho when it was released in 1960 but this was not really “a thing” for movies or TV shows in 1980. At least, that’s not how I remember it. So there was a lot of pre-publicity for this film and also a lot of knowledge about the content. Full disclosure in fact.

I remember reading Alan Dean Foster’s excellent Star Wars spin off novel, Splinter Of A Mind’s Eye, at least a year before the second movie hit our screens. If you’ve ever read it, it seems a pretty obvious conclusion that Leia has Jedi powers. In fact, it always puzzled me why so many people were speculating so hard about the line in The Empire Strikes Back when Yoda turns to the ghost version of Obi Wan Kenobi and says... “No, there is another.” Had they not read Splinter Of A Mind’s Eye? I thought it was pretty obvious who “the other hope” was.

At least three months before Empire opened over here (and my brain is telling me that it was at least 6 months before but I have no conclusive dates to work from), there was a big exhibition of costumes, models and drawings from The Empire Strikes Back in Selfridges. I went three times at least (I tended to be in London a lot during school holidays) and it blew me away. This was the only way, at the time, to see a playback of the trailer for the movie which hadn’t hit British cinemas yet. It was amazing.

Both the novelisation and the paperback reprint of the US comic book came out over here many weeks (possibly months) before the movie was released and I remember reading the comic strip and being in awe that Darth Vader turned out to be Luke Skywalker’s father. These days, if you watch the entire saga in chronological order, it’s no longer a “surprise reveal” and so I guess even this information doesn’t count as a spoiler in any way these days. I was also quite intrigued, that the movie left the story on a cliffhanger. I kept my silence about this stuff because I didn’t want my mum and dad to know what was going to happen before they saw it but I remember my father, before we saw Empire, wondering out aloud if they would bother doing another sequel. I remember answering that they would be in real trouble if they didn’t.

When I finally saw the finished film it was in no way really spoiled by reading the comic strip adaptation (which in those days were often quite different in detail and expression than the work they were adapting anyway) and it surpassed, as far as I was concerned, the absolute brilliance of the first Star Wars movie (reviewed here). I was already pumped up by the comic strip, a couple of clips on clapperboard and a recently aired TV documentary on John Williams by that time but the movie certainly lived up to my, frankly, giant sized expectations.

To say it’s the darkest of the Star Wars saga is an understatement. The only film in the series that comes close in its portrayal of some pretty bleak events is The Phantom Menace (and many people would argue with me on that point I expect... it’s reviewed here if you want to take a look) and The Empire Strikes Back certainly lives up to the implication of its title. The heroes are basically on the run all the way through this movie, Han gets frozen and taken away for bounty after being betrayed by his friend in a less than black and white moral dilemma, Luke loses his hand and ends up becoming closer to Darth Vader in spirit when it is replaced by a mechanical version and... basically... the rebels who are the main protagonists lose at the end. A good dramatic answering call to the previous movie and a perfect set up for an upbeat, good triumphs over evil resolution for the next... something which I remember George Lucas was very aware of when interviewed about it a while later.

It’s also got some truly impressive set pieces such as the fantastic Battle Of Hoth (although I don’t like the “revised” snowspeeder details on the overhauled versions of the film) and the Millennium Falcon’s chase through the asteroid field. It’s also the feature film introduction of Bobba Fett, although he has now been retroactively “inserted” into the previous movie too. I remember sporting a very trendy Bobba Fett T-shirt the year the film was first released. His first appearance was actually 1978, of course, in the much ridiculed Star Wars TV Summer Special... something which I’ve still not quite brought myself to watch, over the years.

And, of course, the music by Johnny Williams is absolutely fantastic... even surpassing the excellent score he did for the first movie, for some listeners. Certainly, The Battle of Hoth gives us some of the most intricate and exciting action music of all time and his scoring for The Asteroid Field is one of his greatest cues. A slightly watered down version was used by him for years in concerts (the first time I saw him perform this live was in either 1981 or 1982 at the Barbican Centre in London) but even that version is great... although the less symmetrical version used in the movie is very powerful.

The use of leitmotif in the score gets a bit screwy unless you’re really concentrating. For instance, when Luke lands on Cloud City (Lucas’ echo of the city of the Hawkmen from the original Flash Gordon strip and serial... as we all recognised straight away) to rescue his friends, an action fanfare version of Yoda’s Theme is used in quite a striking way... even though Yoda has left the film by this point. I guess the justification here is Luke is going into battle fresh from the teachings of Yoda but... I don’t know. It always seemed a bit out of place though, frankly, too wonderful and powerful to really care about in terms of musical continuity at the time.

Unfortunately, this movie now also suffers from the curse of Star Wars revisionism. Lucas has added and subtracted bits over the years and made replacements to fit in with his extended continuity. Both the Emperor and his voice, for instance, now match with the later Ian McDiarmid version and there’s even an entirely new scene composed of using shots from a few sources, including Return Of The Jedi, where Luke and his father have a Jedi “mind conversation”. This last bit wasn’t in the movie before and, frankly, detracts rather than adds to the power of the final, rebels running away in defeat, wind down of the film.

All in all, though, Star Wars Episode V: The Empire Strikes Back is still the greatest movie in the Star Wars saga. It kept people talking and speculating for the next three years while they were waiting for the third one and, as you would know if you spend any time on the internet at all, people are still talking and speculating about the continuing franchise to this day. The Star Wars series of films is probably the most powerful and popular series of films ever released in cinemas... and the initial strength of The Empire Strikes Back is one of the reasons why.