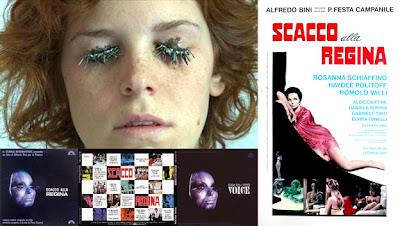 Right. I think this is going to be one of my shorter reviews, I’m afraid.

Check To The Queen (Scacco Alla Regina) is a film of which I’d never heard of until a stall holder at a major London Film Convention recommended it to me. However, I’m pretty sure this is one of those films where the music has haunted me for quite a while now.

When I got the movie home I noticed a quite striking and what I would say is a fairly historically iconic visual image on the back cover of the front of a woman’s head projecting from a flat surface (actually a hole cut in a mirror, in the film proper). This is one of the more interesting shots from early on in this movie (although the more famous version is obviously a publicity shot) and I recognised it immediately as being the cover image for a current “best of” album for Ennio Morricone’s famous singer Edda Dell’Orso. It's also used these days as the cover of the soundtrack album. The compilation it's used on is actually called Edda Dell’Orso “Voice” and it contains a number of tracks by Morricone and other composers, including Piero Piccioni who scored this film. Check To The Queen is represented by no less than three tracks on that particular compilation. And I immediately knew from this that I was probably familiar with a lot of the music in this film already, since I have a number of Italian movie music compilations and, yeah, this film seems to get picked on a lot for those kinds of albums... and rightly so.

So, before I’d even got around to watching the movie, I put a request in to my major supplier of Italian scores and he sorted me out the expanded edition of the soundtrack, when I saw him at another film fair. I was advised that the score on this one was “really good” and, after having listened to the album a few times... I’d have to agree with that conclusion. It was also, obviously, very familiar.

It’s fairly far ahead in terms of it’s time and the content being explored in a commercial venue such as cinema. Various forms of objectification play are indulged by the mistress before Sylvia starts to go along a path of almost topping from the bottom (in modern parlance) and as a result is auctioned off in a non-binding but ultimately worrying auction due to the tone of the film depicting the mindset of a submissive in such situations as suffering a form of mental illness which needs to be cured. Not the domination part, mind, just the submissive. I guess it was either a censorship issue or a bit of naivete at the time that any discussion of mental health rears its head at all in terms of this kind of relationship or lifestyle choice. Certain aspects of it wouldn’t be for all people in that kind of scene, I know, but it’s wrong not to be vocal about the lack of right one person or body of people has to question another person's sexual or power triggers and so forth, in that ‘closed to the general public’ lack of freedom. I thought the sixties were supposed to be a little more liberated than that. I always was, growing up in the late 60s to late 70s.

So okay, sexual politics and power games out of the way... the film is shot really nicely. The psychedelic fantasy sequences I mentioned are heavy on the filters (to the point where some of the action is obscured or uncomfortable to look at) and there are some nice shot set ups which utilise the overemphasised vertical shapes of the mansion house in which nearly all of the movie is set. There’s a nice scene where Margaret rides a mechanical white horse (not dissimilar to the one in Korda’s The Thief Of Baghdad) which leads to some pony play fantasies in Sylvia’s head and there’s even some living statue play... Yeah. Whatever. I’m with Hot Fuzz on this one... the blight of the living statue.

And, of course, there’s Piccioni’s wonderful lounge score with Edda Dell’Orso’s amazing voice coming at you... you’re probably familiar with her from a load of Italian scores already such as A Fistful Of Dynamite and Once Upon A Time In The West and she is just as spellbinding working with Piccioni here as she is with some of the other famous composers she’s collaborated with in the past. Any film scored using her incredible vocal talents is going to elevate itself and the score glues everything together in this movie and makes it work. Even stops it becoming boring at times, which it threatens to do on a few occasions... like I said, not much happens.

I don’t think I’d recommend this film to many people, even less so to those who I know who are in the BDSM scene and who, like me, might become just a little enraged at the lack of intelligence and conscience applied to the subject matter in this particular area... which is pretty much what the movie is all about. On the other hand, the movie has some spectacular shots, competent editing, beautiful naked women and a truly classic lounge score which is obviously, due to its prominence on various compilation selections, considered very highly in the industry. So if you’re into all that stuff... yeah, give it a go.