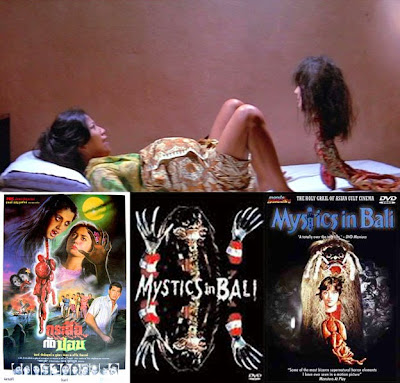 Warning: Seriously, if this review didn’t have spoilers here you probably wouldn’t be interested in seeing the movie. You need to know this kind of stuff exists.

A leák (or leyak) is a powerful Balinese shape-changing spirit demon, from what I can make out. Often they will take the form of pig spirits or flying balls of fire (as happens in a couple of scenes in this movie) and they prey on blood, especially the blood of new born, in a vampiric way. So... in summary... a powerful, vampiric, black magic demon of some description.

I don’t actually think I’d heard of a leák before watching this movie as, I think, my only other encounter with the films of Indonesia was the female biker/prison movie Virgins From Hell. My interest in tracking down this title came from a trailer excerpt I’d seen on two other Mondo Macabro releases, Countess Perverse (reviewed here) and Gravida (reviewed here) What I saw in this trailer excerpt, or what I thought I saw, was a woman’s head and spinal column detaching from her body and then floating off to deliver cunnilingus to a woman somewhere else. However, as it turns out, from the way the trailer was cut and the way I interpreted the juxtaposition of the visuals... what happens in the movie itself is even a little more warped than that. I’ll get to that soon.

Okay, so, with flying heads and lightning shooting out of levitating people’s hands, I figured I really couldn’t miss out on this movie and I finally ordered one of the remaining copies from US Amazon.

Now Mondo Macabro are a label I like and support a lot (seriously, who else would try to get a release for stuff like this) and they present the film here in a mostly crisp print (apart from some of the special effects transition scenes, probably because of the way the stock was originally treated for the FX... seen that kind of thing before) in a nice 2.35:1 anamorphic transfer. About my only real grumble is that the movie is dubbed in this instance, which I was a bit annoyed about. Surely it would have been cheaper to carry the original Indonesian soundtrack and put some subtitles over the top?

Anyway, that quibble aside, I have to say that for me, as someone who likes to have “adventures in cinema”, I was truly pleased to be able to see this one. It’s quite terrible and unintentionally funny pretty much throughout... but it also has a certain charm of it’s own and some nice little make up effects.

The credits sequence is amazing and transports you to a place where a masked leák is dancing around for you, followed by shots of various different and interesting demonic masks being jangled about the screen in front of you while exciting and, in some ways, unbearable music is played at you. It reminded me of something from Live And Let Die (reviewed here) in that respect. The credits also include that OMFG moment when you discover this stuff is actually based on someone’s novel. Seriously, there was a source novel? With flying heads?

Okay, so the film starts off pretty well where the main male and female protagonists, who don’t seem to be very good actors (in fact, the leading lady was apparently a German tourist who did it for a few weeks added on to her holiday for free), meet and we are “expositioned” to death about the girls book she’s writing on voodoo and black magic and her wish to study under the apprenticeship of a leák. Our main man, who is a complete good guy and therefore completely familiar with the concept that you should not go messing with evil spirits (we later find out), contradicts his character completely and offers to hook her up with one.

There’s some interesting and not uncreative framing throughout the movie... especially in the non-effects sequences like this. There’s a beautifully wild transition where we are following the conversation between these two people, walking towards camera through an arch, where we suddenly pan up to an integral set of carvings on the arch culminating with a demonic gargoyle amidst an explosion of wild music, which continues playing through the next scene as source music. This is all good stuff.

Another tactic the director seems to use in the quieter scenes is to remove the camera from the main action to focus on establishing the location within the same shot. For example, a conversation taking place carries on in the soundtrack while the camera pans away and around the surroundings before eventually cutting back to the people having the conversation, now having placed them in the environment. It’s an interesting way of doing things and something I rarely see done outside European cinema (except for maybe in some of the films of Woody Allen or Martin Scorcese).

When the two meet the leák for the first time, we are introduced to her incessant, cackling laughter which seems to be her trademark. It’s seriously persistent and makes Cesar Romero’s turn as The Joker in the 60s Batman TV show seem positively sombre. She also shows her sense of humour when offering to shake hands with Catherine (our foolish and mostly wooden heroine) in the traditional American way... but leaving here arm behind in Catherine’s hand when she leaves... it crawls off on its own later.

This is all good stuff of course and she agrees to take on Catherine as her disciple for “payment”... which, of course, Catherine never bothers to ask about. The deal is sealed the next evening when Cathering brings the leák jewels and several bottles of blood to drink... although where she got the bottles of blood from is anyone’s guess. The leák is pretty much unseen, hiding in the bushes, for this sequence but she asks Catherine to remove her skirt so her extra long tongue can lick her inner thigh and tattoo a demon symbol on it with what I can only describe as, her electrified taste buds. Don’t worry... it sounds much better than it actually is. Most of the special effects are more than a little ropey, it has to be said, although the leák’s long nails in certain scenes are marvellous and put me in mind of early German Expressionism cinema and, also, the annhilants (Walking Bombs) from Flash Gordon Conquers The Universe.

The next night, Catherine is back and trying to copy the demon ladies laugh in a scene so prolonged and stupid that I even had time to think of that Cesar Romero crack I hit you with a couple of paragraphs ago. But, sad to say, being a demon woman’s disciple is not all it’s cracked up to be and Catherine doesn’t really remember the times the leák takes over her head. And I mean literally...

We come to the first of a few occurrences of what I’d seen on the trailer. Catherine’s head and bloody spinal column rip from her body under the spell of the leák and fly at high speed to visit a pregnant lady and suck at her vagina... not for the joy of f*cked up voodoo sex as I’d naively imagined from the trailer, but in order to suck out and consume the baby in the mother’s womb before it’s born. Nice people these leák!

And I know Catherine is not really herself after these little kinds of jaunts because she doesn’t really understand the after effects when she awakens the next day. For example, after spending her night as a giant snake, she goes to kiss her new sweetheart but instead runs to vomit green bile and three live mice. Obviously her snake self hadn’t got around to digesting these poor little guys yet but, regardless of the fact that there are live mice jumping out of her throat, Catherine proves her general naivete by assuming she must have eaten something that disagreed with her at a banquet the night before.

A further example of how being an apprentice to the dark arts can increase your stupidity ten fold occurs when she awakens one morning to find blood dripping from her mouth. She concludes that the events of the night before must have been a dream and that she seems to have bitten her lip. Blimey. Well maybe she was into some lip biting the night before but, if she was, they certainly weren’t her lips! Stupid, stupid girl!

Meanwhile, the cavalry, in the form of Catherine’s new lover, his uncle, and various other people who work for the forces of light... a team of “leák-busters” in fact, totally fail in some of their intents but rush in anyway for the final half hour to do battle with the leák and Catherine in a scene which includes an almost but not quite good re-assembling pig transformation, bad levitation effects, cartoon lightning forces, cartoon flames and a few bloody incidents. It’s not a great climax to the movie (which has the most abrupt, non-informative, lack of closure ending I’ve seen in a long time) but the film is what it is and I am, I have to say, happy to have seen it.

This film, as I’m sure you may have guessed by now, isn’t going to be everyone’s cup of tea and, I can’t in all honesty, say it was even any good. But it was entertaining and if, like myself, you are on a mission to seek out different cinematic experiences from around the world, you may just appreciate this film even from the scene where, after the heroes have seen Catherines head flying around and attempt to get back into her body, one of the characters comes to the calmly and wildly inappropriately delivered conclusion that... “Maybe Catherine’s being used by supernatural forces.” Oh yeah. Gee. Ya think?

Honestly, if you are into preposterous movies, then Mystics In Bali should probably be on your “see this rubbish before you die” list. It’s not pretty but it is notable, for many dubious reasons. Proceed with caution followed by a contradictory air of wild abandon.