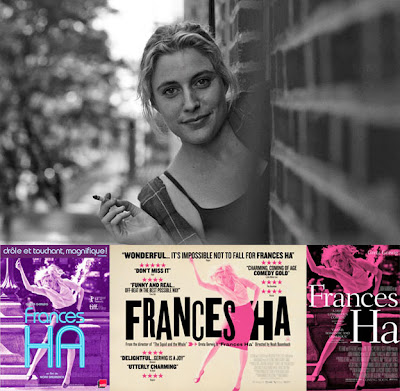 Warning: Potential spoilers, depending on how you look at things.

Okay, so I don’t know why we got Noah Baumbach’s latest movie so far behind the USA release but, whatever, at least it got here. One of the things I heard about this movie was that it has no story. Now, I’m cool with movies with no story, plot or any kind of coherent structure. I honestly don’t think those are necessary components of cinema at all... no matter how many directors insist on saying it is.

On the other hand... Frances Ha is not that kind of movie.

I don’t know what other people were watching but it certainly has a certain amount of story content... it’s just that it’s a small story and is more like an arc of progressive spiralling down than anything else, told through conversation rather than incident. Kind of like a building of an impression of life like Koyaanisqatsi, but with conversations shot in gorgeous black and white replacing the speeding imagery and Philip Glass score.

And I’m also fine with that... although I have to admit I was quite looking forward to seeing a movie without a story again. Haven’t seen one of those for a while.

The film is cleanly framed and most of the shots seem to be absolutely static. Like a series of master shots strung together and used as they are... which is as good and stunningly beautiful a valid technique as you’re going to get. The film, because of the black and white photography I suspect, has been compared to the works of Woody Allen... but this is really not much like Allen’s oeuvre except for, perhaps, locale. In fact, if I was going to compare the style of the movie to anyone, I think I’d be looking more in the direction of Mr. Whit Stillman than Mr. Allen, although either way, to be honest, should be taken as a compliment.

The dialogue, co-written by the lead actress Greta Gerwig, is charming and portrays the titular (kinda) role as a person who is perhaps at odds with the real world. Gerwig plays her as a totally upbeat and uplifting spirit who refuses to let life’s little (big) problems get in the way of her general cheerfulness. A bit like the character Poppy, played by Sally Hawkins in Mike Leigh’s Happy Go Lucky (reviewed here), but with a little less of the in-your-face quality to it.

This being said... I’m sure a lot of people must have bought in to her as a character without realising the not too subtle difference between the way she acts and the way she is. Her situation is mostly a kind of dead end and a terminal one at that, throughout the majority of the movie and I find the “poster quotes” that the movie is uplifting to be mostly false. Sure, I can see that her easy going personality could be seen on its own as fairly uplifting... I’ve pretty much said so above. But the fact that her character seems, most of the time, doomed to misunderstand the social and economical milieu in which she finds herself, in addition to being a person who will go the extra mile for someone... only to find her loyalty not really reciprocated as she expected, makes her more of a sad character.

I loved the film, and Gerwig in particular, but all the way through I kept thinking of her a little like the title character in my favourite Fellini movie, Nights Of Cabiria... but without the added insight of the notoriously once cut “man with the sack” scene.

To clarify, in Nights Of Cabiria (reviewed here), the prostitute Cabiria follows around a kind benefactor one night, the “man with a sack”, as he charitably gives food to various poor people who find themselves at life’s ragged end. Cabiria sees well known people from her past who were big shots in her trade who have drifted from memory and ended up on the scrap heap, thus enabling her to see her life as her future is likely to be and try to make plans accordingly... only to find her destiny inevitable (which is another story).

I felt this way about Frances Ha who, when things don’t go the way she plans, tends to mostly not be flexible enough to adapt to her current situation straight away and instead, finds her situation getting worse and worse. Although it might be seen that her plight isn’t the same as the Cabiria role made famous by Giulietta Masina, the stakes seem to me to be exactly the same as the former character in many respects, as they are for us all. We all need a roof over our head and a basic job to keep some money coming in. What Frances Ha doesn’t have, is a character like the “man with a sack” who can help give her the insight into where her life is going at a time when she can do more about it.

Unlike Fellini’s opus, Baumbach’s Frances Ha at least gives the title character a certain amount of hope in the mix and the last sequence, where she sacrifices her dreams to take the job and then create her own opportunities, is something of a reprieve and a chance to take stock for the character. At least that’s the way I saw it.

Frances Ha, and the title sums up the character really well if you say it out aloud*, is a witty, insightful and charming movie. Hypnotic, entertaining and, certainly, very funny. It also, I have to say, put me on a bit of a downer for the rest of the day. The fact that some of the characters in this film are ultimately missing out little pieces of themselves and mostly falling towards their fates or, in some cases, being dragged towards them, was less than uplifting to me, in all honesty. But that’s actually not a criticism (it’s as valid an emotion to prod with the sharp end of a cinemaic stick as anything else) and I found a lot to laugh at too. There are some genuinely clever one liners throughout the running time of the movie. It’s light and fluffy in places but using that frothy top to hide the emotional weight it harbours underneath. I’ll certainly be watching this one again and I think it’s a good night out at the movies. I also think it’s the best film yet that I’ve seen this particular person direct. Perhaps you’ll enjoy it too.

*Actually, when I asked the lady at the box office for a ticket, I asked loudly for a ticket to Frances HAAAAAAAH! Warning... some people get perplexed by even the slightest deviation from the accepted norm, it would seem.