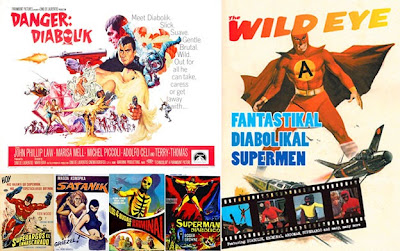 Wild Eye For The Fumetti Guy

Well this is going to be a hard review as I am, it has to be said, feeling fairly ambivalent towards this book right now.

On the one hand, it’s “mission statement” seems a little unclear to me and, even though the author addressed this very issue in his introduction, I still felt myself wondering why loads of “costumed hero” movies had been left out of this book. Maybe it’s because the author seemed to be (mostly) limiting himself to movies taking their “inspiration” from Italian fumetti, in the proper Italian sense of the word (that’s comic strip to any non-Italian speakers) rather than international movies based or, in this case, inspired, from comic books but, even so, I’m sure there must have been more than 31 of these things made in Italy at the time. And if he is doing so, then why does he have a kind of “also ran” back up list of pocket reviews in a couple of pages at the end of the book which aren’t exclusively Italian.

On the other hand, there are really no other books around to cover these kinds of movies at present and until one does come along then Fantastikal Diabolikal Supermen is pretty much the only game in town and is, therefore, an essential purchase in terms of having any coverage of this in your cinematic, reference book library. And it certainly doesn’t harm that the writer is actually quite engaging with his style of writing and manages to pack some interesting information into the reviews of the 31 films in question.

However, no matter how good this book is, I have enough minor criticisms of it in my mind that being able to completely recommend it seems somewhat hard... unless you are in possession of all the facts.

So one of the things is that it’s quite a slim volume, especially for the £12.99 retail price marked up on the back. To offset that comment, though, I will say that the point size on the type is quite small and double columned. Some may complain at the size of the point size being hard on the eyes (and I suspect one of those complaining would be me) but the upside of that is that there’s more textual content to the book than you might, at first realise. True it only covers 31 or so films but I would guess if the text was printed at a more readable size, there would have been a much larger number of pages to give the book a decent feel... and a lot less squinty eyes in the house.

An opinion, rather than a criticism, is that I did find the reviews, while always breezy and interesting, to be of a somewhat different opinion of the films covered to what I would have said. I bought this book to acquire a list of movies of this nature that I should be watching out for but, when I flicked through and saw how few films are covered, I realised that I already had a large chunk of these movies in my own DVD library... which is a bit of a shame. However, that means I can see the difference between my critical opinion of a film and the writer and researcher of this book and the chasm between our diagnosis of any particular film is sometimes a little wider than I would have liked. For example, I find the first of the two Superargo movies, Superargo Contro Diabolikus, to be far superior to the, admittedly, fun sequel. Blake prefers the second movie, Superargo And The Faceless Giants (reviewed here), and argues that to be the better film. Similarly, although I dearly love Mario Bava’s genre classic Danger: Diabolik, I don’t agree with Blake’s rave review of it.

The text makes for fascinating reading and gave me some interesting background knowledge that I didn’t already know... such as Danger: Diabolik actually perpetuating (along with the El Santo films I would guess) the movies made under this particular genre but, having such a troubled production history (various directors, writers and actors were involved with the film since the initial announcement), that it didn’t get out on release until many of the “bandwagon films” trying to capture it’s market were already out there by a long shot... a good two or three years. Also, the book cleared up for me the suspicion that not all (in fact, most by the looks of it) of these movies were based on actual fumetti, instead they were just meant to look like it. So a little light went off in my brain on that mini revelation.

Regrettably, the book is full of typos (probably not the writer’s fault but certainly the publishing company’s fault for letting it out the gate in this state) and, more worryingly, with the occasional basic factual inaccuracy which even a comparative novice to the genre such as myself could spot. For example, each film covered is preceded by a lengthy couple of paragraphs detailing the cast and crew, but in the case of the second of the Kriminal films, Il Marchio Di Kriminal, the musical composer is listed as Manuel Parada when it was actually scored by the wonderful Piero Umiliani. A similar mix up with composers is made on the first of the Kriminal films too and, although the exact same mistakes are made on the Internet Movie Data Base, it doesn’t excuse the fact that this is wrong (unless people were signing off on each others compositions for copyright purposes at the time, which wouldn’t be the first time this has happened*). The IMDB is a useful tool, but it’s not always right. I’m sure the two soundtrack CDs bearing the names of the correct composers wouldn’t have necessarily been allowed to be released as they are now with this oversight.

And in spite of all this, I’d still (at time of writing) list this book as an essential purchase. True, it has its problems, but it can’t have been that easy to get publishers interesting in producing a book of this subject matter (although the market is crying out for some tomes featuring really detailed analysis of these movies... such as the one Tim Lucas provides in his excellent book on Mario Bava, All The Colours Of The Dark). I think, if you know the pitfalls, then it’s a fine book to have to be able to pull our for a quick reference. If you’re one of those film fans who have never heard of the likes of Superargo, Argoman - The Fantastic Superman, The Three Supermen, Kriminal, Satanik, Diabolik and their ilk, then this book is definitely the best place to start, I would guess.

Either way, it’s worth picking up until something more extensive, featuring all the other vigilante heroes and villains of sixties and seventies cinema, such as Santo, Blue Demon, Judex and their kin, comes along.

* A recent conversation with an expert on Italian film music cleared this up for me and my deduction hinting at the political nature of cross-country productions is indeed correct, it would seem.
Posted by NUTS4R2 at 19:15