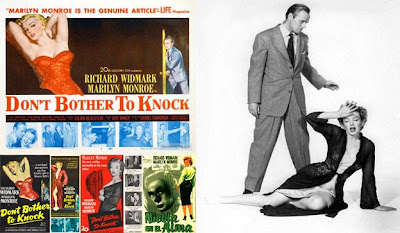 Knock Around The Clock

Warning: There are a few spoilers here, but I...
don’t bother to... give away the ending.

Don’t Bother To Knock is a movie I hadn’t seen for a very long time. Not for at least thirty years, in fact, since I was a teen and was obsessed by Marilyn Monroe... not so much for being a great actress (I haven’t seen a great deal of her movies, to be truthful) but as much for the way her imagery was used and exploited as a powerful female icon to many generations (a practice that still remains today). If she’d been allowed to grow old and die a natural death she would, I fear, be nowhere as famous as she is today. Instead, her “brand image” has gone on to inspire and sadden people even now, as much as her acting performances are there to be enjoyed and admired in the modern, home viewing era.

Out of the movies I’ve seen her in, where she’s usually playing flirty, comical roles, this film is among my top three favourite Marilyn performances, along with Niagara and Bus Stop... although don’t ask me where in that top three this one comes because I’ve really not thought about it that much.

This was one of her early films, only five years into her career while she was still finding her feet and the studio really didn’t know what they were doing with her. It’s also, apparently, her first straight dramatic role, I’m informed, and it wouldn’t surprise me if the incredible performance she pulls off in this movie is what directly led to her being cast as the “femme fatale” in Niagara, a year later (and reviewed here).

Shot in black and white, Don’t Bother To Knock is one of those rare films, like High Noon and Before Sunset, which is actually set in real time. That is to say, time passes for the audience at exactly the same rate as the events that take place on the screen and, although the approach to the movie in terms of music and snappy dialogue starts off all bright and breezy with the young Ann Bancroft, making her movie debut as Lyn Lesley, singing old musical numbers in the hotel which provides the setting for the whole story... it’s not long before a decidedly dark tone sets into the piece when we meet our main male protagonist Jed Towers, played by the always reliable Richard Widmark.

Lyn has sent Jed a letter telling him that they are “over”! Naturally, this encourages Jed, an airline pilot, to get a room at the hotel and pester Lyn between songs from her floor show to find out where he went wrong and if there’s any hope of reconciliation. Lyn wants him there but she rejects him again (I’ll never understand the female mind) and he gets naturally frustrated and demonstrative. I don’t blame him when she comes out with confusing statements like... “I’m not angry... I’m just furious.” She said what now?

Even the bar tender, who wants to see Lyn happy, has words of wisdom for Jed when it comes to commitment and caring (which is kinda, I think, where Lyn is going with her psychological shenanigans), and it’s just another example of some great, crisp dialogue moments the movie has. When Jed and he get talking on the subject of “wives” he unleashes this little gem at Jed...

JED: “Get married and you become a statistic.”
BARTENDER: “Stay single and you end up talking to bartenders!”

Meanwhile, the main plot has turned up in the form of Marilyn Monroe playing Nell (originally Munro in the source novel on which the film is based, but apparently changed when the former Miss Norma Jean was cast in the part). Her uncle, who is one of the elevator operators (played absolutely solidly by the great Elisha Cook Jr), has fixed Nell up with the job of babysitting a couple’s 7 or 8 year old girl while they go downstairs to an important party in the ground floor of the building (the father is played by Jim Backus, who many will know as the voice of the short sighted cartoon character Mr. Magoo).

All well and good and all we know about Nell is that she desperately needs a job... but we will slowly begin to piece a lot more of her past together as we go through the movie. Her uncle promises to look in on Nell when he gets off his shift, to see she’s doing okay.

Meanwhile, Jed has given up on Lyn for a while. He goes back to his room, exchanging some more crisp dialogue with Elisha Cook Jr’s elevator operating character, Eddie, on the way up...

The film is noirish and Jed’s frustration is palpable as he paces his room, listening to Lyn’s voice on the live floorshow pumped in to the hotel room’s radio set. Then he glances out his window opposite a court in the middle of the hotel and sees Nell in the room across, wearing a sexy dress. He phones her and invites himself over to the room where she’s baby sitting. What he doesn’t know is that the dress and the ear rings and the watch that Nell is wearing belong to the couple who she is baby sitting for. With the kid tucked up in bed (or so she thinks), she starts to try the mother’s perfume and clothes on and eats the candy she so politely refused when offered earlier, in a greedy, gluttonous way which really starts to tell you that... yeah... their might be something a little wrong with our darling Nell.

After Jed has spent ten minutes with her, he begins to get a measure of her too, especially when the little girl comes out and gives the game away that this is not Nell’s apartment. Those tell-tale scars on the underside of Nell’s wrists where she’s tried to kill herself recently are not very reassuring either and, once the child nearly goes out of the window, but for the intervention of Jed... then he really begins to twig. Especially since Nell now mistakes him for her former husband, a pilot who died in an airline crash a few years before. After some shenanigans with busy body neighbours and Uncle Eddie, who Nell knocks cold, leaving him with a big gash in his forehead and... a little later... locked in a closet, Jed slips away to go downstairs and try to patch things up again with Lyn, once he’s made sure the kid is okay. He can see her silhouette sleeping in the dark as he slips out the door so she must be okay, right?

Nope. Another shocking moment in a movie which keeps building the suspense slowly is the revelation that, after all the noise the child has been making, Marilyn has hog-tied her on the bed. When Jed is telling Lyn about his evening and realises what he must have actually seen, in a moment of personal revelation that is similar to those experienced by lead actors in an early Italian giallo in terms of the way the mind plays tricks on one, he rushes up to the floor to find the child’s mother and Nell slugging it out in the girls room and all hell breaks loose.

The house detective arrives to take names and get to the bottom of the story and Nell takes this opportunity to escape, although she’s so out of it by now she doesn’t even realise it’s an opportunity. She grabs a razor blade and “wanders” off without anybody realising and makes her way to the lobby where she threatens to kill herself on account of all the attention she is getting. Then... oh, hang on, I don’t want to spoil everything. Let’s just say that Jed behaves in a manner that Lyn realises Jed has a part of him that he doesn’t show much... a part of him she’s been missing... and through Nell’s tragic tale, the two lovers start their relationship healing process.

This threadbare framework of the movie in no way tells you just how amazing the film is. The direction is quite throwaway in some respects, but the shot design is also be quite clever without making a fuss about it (including a nice conversation moment between Nell and Jed conducted through a shot in a mirror, in one sequence) and long steady shots are the order of the day. The artistry behind the camera is quite evident, even if the delivery is more pedestrian in it’s lack of vertiginous tracking shots and manipulative stylings. It’s a stark noirish milieu with sharp black and white photography and a sense of time ticking by at its own rate. The film is only 76 minutes long but never feels rushed at all or, considering the simplicity of the incidents depicted, in any way padded.

All the acting is top notch and solid, as you would expect from the cast on hand, with even the young Ann Bancroft turning in a fine performance in her first feature. The absolute icing on the cake, though, is Marilyn Monroe’s unbelievably worrying blend of her oft seen child-like naivete coupled with an intense darkness which she is able to let you see play across her features. Seriously, it’s like watching the cogs turning around in her brain, the facial expressions and tone with which she plays the piece is that good. If this was a brand new film this performance would be guaranteed to snag a best actress  oscar away from whoever this year’s hot contenders are. It’s absolutely stunning. The expression on her face when she starts getting her... “dark thoughts”... is absolutely chilling when seen in the context of the rest of her personality. I’m amazed Marilyn wasn’t given a lot more roles like this to do because the way she manages to play the tightrope delicacy of the part is absolutely exquisite. Anyone who thinks Monroe was just a brilliant comic actress or just an icon of female beauty (and she was both of those things too, of course) really needs to sit and watch this film. It won’t take up too much time and the intensity of her performance increasing as the running time wears on is absolutely brilliant.

So anyway, there it is. Don’t Bother To Knock. You can get this movie for a fiver or less at Amazon and if you haven’t seen this one, you really ought to. A classic piece of movie making, the style of which is all but forgotten these days and Hammer Horror enthusiasts might want to look at it to see what the director of such movies as Moon Zero Two (reviewed here), The Vampire Lovers (reviewed here), Quatermass And The Pit (reviewed here) and certain other genre favourites was up to before working on those things.