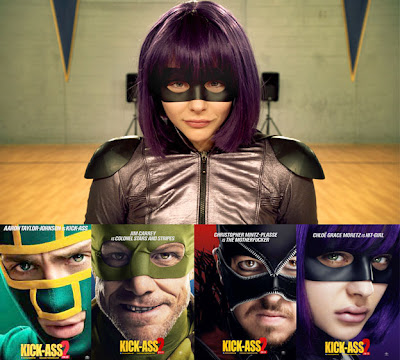 I quite liked the first Kick-Ass movie (my short review here) but for some reason I never really liked it enough to get around to taking another look at it. Sure, it was cute and quirky and the Hit Girl character alone was worth the price of admission... but it wasn’t the same kind of phenomenon to me as it was to some of my friends. So having said that, it would be true to say I didn’t exactly rush back to the cinema to see the sequel and, instead, I waited for a week before finally making it along there.

Although the visceral use of violence has been somewhat toned down for this sequel (although I don’t think that was a deliberate move on the part of the producers), the film still manages to pack a punch... but there’s no “shock value” or real surprises this time around. Now normally I would feel this is a sign of a sequel which doesn’t live up to the quirky promise of the first movie but, in the case of Kick-Ass 2,  I’m going to have to call it as an exception to the rule...

Although there are certain triggers and trappings which connect very heavily with the first movie (including the title character’s all important and heart-felt voice over narrative), this film does things a little differently and, it seems to me, has actually gained somewhat by having a more formal, Hollywood style structure (and that’s really something, by the way, for me to say that about a movie)... with the story cross-cutting between the three main characters Kick-Ass (played by future Quicksilver Aaron Taylor-Johnson), Hit Girl (played by Chloë Grace Moretz) and the ‘super-villain’ The M*therf*cker (played by Christopher Mintz-Plasse).

It’s not totally a film about kicking the stuffing out of a bunch of evil people but a look behind the hearts and moral concerns of those people. Yeah, I’m sure, from what I can remember, the first film also covered this area, but Kick-Ass 2 seems to tackle the issues that arise from the lifestyle its main protagonists choose in a more head on and mature manner than the first... and I really appreciated this. It also seems to take the consequences of all the negatives in this arena and highlight them in a more serious manner, rather than just throw them off as another joke. Not that the movie isn’t a laugh riot, of course.

I also liked the action scenes which, while the violence is less shocking and ‘matter of fact’ than the first movie, are still choreographed quite well. My three favourite action scenes being a scene where Kick-Ass is dressed as a pimp on his first re-training mission with Hit Girl coming to the rescue, the scene where Hit Girl in her civilian identity has to show off her dance moves (which she achieves by intercutting a four villain battle in her head) and the sequence with Hit Girl, right after the funeral of a major character, where she rescues Kick-Ass from a speeding van by climbing all over it, avoiding hails of bullets and getting up close and personal with the driver and the gang... with her fists. These sequences are all shot and, fortunatley, edited in a way which won’t leave you scratching your head about what’s going on while still giving you an action high... if that’s your kind of thing. All glued together with a brilliant, consistent piece of action scoring by Henry Jackman and Matthew Margeson. Hot stuff!

There’s some nice stuff too where the movie gives a stylish nod to it’s comic book origins. For example, a scene in which a group of gangsters are talking in a foreign language is not translated with traditional subtitles. Instead, the characters all have comic book talk bubbles coming out of their mouths which translate what they are saying. This is followed up with a nice sucker punch near the end of the movie where Hit Girl gets one final insult in after she’s done killing arch villainess hench-woman Mother Russia... which she delivers in perfect Russain with another speech bubble translation. Nice touch that.

The film tries to have its cake and eat it at the end of the movie. It’s set up that Kick-Ass and his ‘superhero’ chums can’t go back to the lifestyle they were living and Hit Girl, too, has got some additonal problems by the close of the story... but it also seems to be just crying out for a third part and, I have to say, after spending some time with this one, I am hoping the powers that be will find it in their wallet motivated hearts to bring on a third version. I’m ready for it and... if you see this movie... maybe you will be too.