Silip (aka Daughters Of Eve) 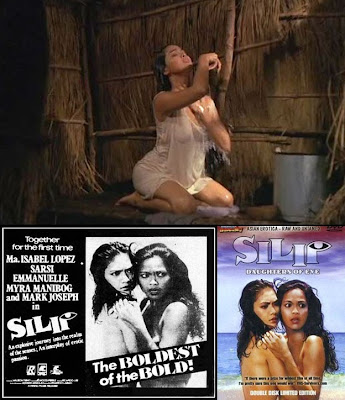 It’s one of those movies that I just don’t know what to make of. I know I’m glad I saw it... I’m just not sure if I liked it. I admired it in a certain sense but, alas, I also got very angry at the director during the opening sequence.

Source of my anger? Well on the DVD case I saw a little warning that, and I quote, “This film contains scenes of sex and violence that may disturb some viewers”.

Which in and of itself is probably fine and a standard thing for some video companies to add to their packaging. But this is Mondo Macabro. A label that specialises in treading the backwaters of way out, provocative and often violent cinema. They know their audience so why does this one DVD out of many warrant a warning?

Well, I suspect it’s all to do with the opening scenes and it certainly upset me when I saw it. In the movie Apocalypse Now we see a live cow being butchered alive with a couple of strokes of a machete or some similar implement and it’s a nasty scene. I don’t believe or support censorship but I’ve always wondered why the BBFC have always allowed those shots in the UK release prints when they won’t even let horse falls in on anything else. Either way, as a carnivore, it challenges my ability to survive pitched against my love of animals in a way I don’t really want to think about...

But the opening of Silip is far worse. Over the first five minutes or so we see a buffalo repeatedly hit over the head, then while still conscious, have its throat slit to kill it completely. Then we see it gutted and finally the head severed. All done for real... no special effects here man. And, yeah, I’m sorry... it may be a hypocritical stance seeing as I’m not a vegetarian, but who likes seeing animals slaughtered... in an inhumane way too? So that kind of upset me.

What it didn’t do, surprisingly, is taint my critical eye of the next two hours which tell a simple tale... or really no tale at all. We have an isolated village of huts with a small population, the adults of said village tending to spend a lot of their time having sex... because it’s not like there’s much else to do here. Living here, also, is the local teacher Tonya, played by former Miss Philippines Maria Isabel Lopez and her “returning from the big city” sister Seida, played by Sarsi Emmanuelle.

The two are like chalk and cheese. Tonya, a virgin, has suppressed her sexuality and tied it up in the realm of religion and the devil and shoves it down everyone’s throat at every chance. Naturally, this doesn’t make her popular with a lot of the parents who have children attending her “school”. Seida is a sex crazed city girl who, like many of the local villagers actually, is happy to have sex again with her childhood fling Simon. Simon’s girlfriend is not too happy about this. Neither is Tonya, who also wants Simon... although instead of telling him and letting him have his wicked way with her, she prefers to demonise the emotion and spend time having naked washing sessions or rubbing salt into her crotch.

There’s not a hell of a lot of a story but it’s more about sexuality, the repressing of sexuality and gossip, the primary weapon of female kind. Hey, don’t moan at me for that seemingly sexist comment... there was an article about it in New Scientist covering how gossip traditionally, since communication began, has been used as a weapon by the female of the species. Actually, this film would make a good case study for some of that science malarkey, to be honest.

The whole atmosphere of the film is one of tension and the nearest movie I could relate it to that I’ve seen, in terms of repressed sexuality, would be Kaneto Shindo’s Onibaba and, in this way I think, the film could almost be a spiritual cousin to that one. Except without the... you know... the murdered samurai warriors and the Japanese demon mask.

It’s not a hard film to watch in terms of visuals. Although the print seems a bit faded (but it might have been the quality of the light in the original photography), many of the shot set ups are quite beautiful and there’s strangely not much moving camera that I could detect in the majority of the movie. Just static master shots and cuts to other viewpoints (but not edited badly like it would be in a TV show). There’s also a lot of female flesh (and the odd male erection if you’re into that kind of thing... another reason why this movie might have trouble getting a UK release) and a lot of misery and suffering as the main characters quibble and philosophise about their lot in life. So in other words, if you’re cool and groovy about seeing a lot of naked females moaning a lot and getting angry, then this film is probably for you.

By the end of the movie, everything gets a little bit "pitchforks and lighted torches"(metaphorically) as bad things happen and innocents are blamed and punished for their perceived sins, once the mob mentality takes over. There’s really a lot of exploitational material in this movie but not necessarily shot in an exploitational manner. There’s a calmness in the attitude of the camera to the wanton acts of lust and violence which are often greater and harder hitting than you would get in an exploitation movie, but which you may not realise as such at the time of viewing.

I can’t say Silip is a movie I’d necessarily recommend... but I certainly felt I’d watched something more than a piece of fluff by the time it was over. So that’s probably not a bad thing. It kinda reminds me of the sort of film which would play at a UK arthouse cinema in the mid 80s - early 90s in all honesty and I wouldn’t be surprised if it turned out that this was shown on occasion at the Scala back in the day. If you want a sexy, violent movie which has all the ingredients of such but without really feeling that sexy or gratuitous, then you might just want to settle down and give this one a spin some time. If not, then probably leave it well alone.