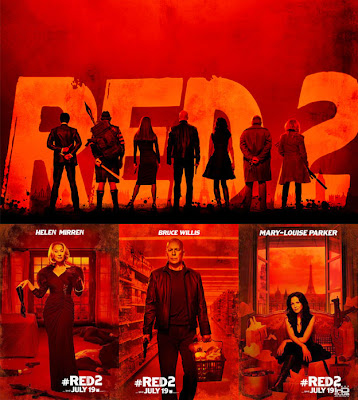 Warning: Yeah, there’ll be some slightly retired
spoilers resurfacing here and coming up for action.

The original RED from two years ago is one of those movies that, at the time, pretty much charmed the pants off of everyone with it’s mixture of bullet spitting mayhem and senior citizens kicking all the fine young assassins’ and agents’ collective backsides all over the place. It’s the kind of film that begs a sequel but, since the movie really hit the mark and did mostly everything right, it's not necessarily something you want them to really produce, just in case they manage to screw it up the second time around.

In case you didn’t know, the acronym R.E.D stands for “Retired Extremely Dangerous” and it tells the story of a bunch of ex-government killing machines who are trying to enjoy their retirement (for the most part) but who find themselves accidentally embroiled in extremely sensitive, extremely dangerous missions... with the young “civilian” girlfriend of the character played by Bruce Willis tagging along and having a blast in the process. It’s based on a DC comic written by Warren Ellis, one of the better writers in the field, and this gives the first film, at least, a real sense of strong story mixed in with the action and the comedy.

I don’t know if RED 2 is actually based on any of the comics but, I have to say, that the second movie continues to add a lot of fun and, more importantly, heart warming moments in between the various fast-paced and, quite spectacular (if ludicrous in some cases... do people really just walk away from a helicopter crash?) action sequences and, I’m happy to say that most of the characters are back from the first film. Notable exceptions are Morgan Freeman (and if you’ve seen the first movie you’ll know why), Karl Urban (who was brilliant in the first one as the “bad guy’s killer pawn redeems himself” character) and, sadly, Ernest Borgnine. Now Ernest Borgnine is a real shame because I know he loved appearing in his brief role in the first movie and I remember reading an interview with him around the time of the first film’s release a couple of years ago where he said he really wanted to do another one and have a bigger part in it. Well, apparently, a slightly more prominent part was written for him for a scene in this second one but, alas, he died a few weeks before he came to shoot it. Which is a great pity... I’m sure he would have had a blast.

However, most the main actors from the first movie are all back. So the line up for this one is Bruce Willis, John Malkovich, Mary-Louise Parker, Helen Mirren and Brian Cox. Also along for the ride this time around are Catherine Zeta Jones, Anthony Hopkins (yeah, that’s right... this movie has two actors who have played Hannibal Lektor in it), David Thewlis (who is a sadly neglected genius of an actor) and Byung-hun Lee (who I’ve seen in a fair few Asian films over the last few years).

And guess what? It’s a cliché perhaps but, with a cast this good, it’s going to be hard to fail with this kind of ensemble unless the writing is really bad... and the writing is really quite good, for the most part, so you’re in good hands. Oh, okay, yeah... it has some cheap sci-fi inventions made up just to annhilate certain plot weaknesses (hello, I’m looking at you “red mercury”) but what film doesn’t these days. And it doesn’t matter too much because this film is one where, yes the action sequences are typical modern Hollywood spectacle... but the plot and dialogue which glue these little set pieces together are just as inspired and fun to watch and it feels like an appropriate mix, for the most part.

There’s a kind of twist which, I suspect, most people will see coming (even from the trailer and casting if they think things through) but it doesn’t really matter because, as well as being about a team of not-so-past-it wrinklies kicking ass, it’s also got the brilliant chemistry between Willis, Parker and Malkovich which helped make the first film such a blast. And of course, everyone is getting in on the act of advising Willis on his love life and how to not be so controlling with his girlfriend etc... it’s really humorous stuff. Oh and, yeah, it has the big thing which made the first movie such compulsive viewing...

All kinds of guns and weapons of lethal destruction, in fact, in what amounts to a slight expansion of her role and importance in the film compared to the first, I think. Which means, of course, you have a few moments where the relationship between Mirren and Brian Cox is, well, hilarious (He likes the way her toes curl up just before she pulls the trigger when she’s on sniper duty, it would seem). Unfortunately, my one criticism of the first movie (as reviewed here), still stands in this one. We want to see a “naked” Helen Mirren shooting off her machine guns... oh well... maybe they’ll do that for the third one which, I understand, has just been assigned writers.

The film does try to repeat, somewhat, the formula of the first film, it’s true... there’s even a “character realises he’s wrong and decides to help the team instead of killing them” moment again from one of the ensemble cast... you’ll probably see that one coming way before it happens too, I suspect. But it really doesn’t matter too much because the formula of the first movie was just perfect and this one really doesn’t drop the ball with it either.

It’s one up on a few fair modern action films too, in that the editing is pretty good and you won’t suddenly find yourself getting lost in the action like you might have in... um... I dunno... Pacific Rim maybe (reviewed here), as an example. This is good and the action and humour/drama of the thing is ably supported with a strong score by Alan Silvestri, who I find a bit hit an miss but he does a terrific job here. It also continues the inventive “comic book” location transitions from the first movie... and this movie does a lot of globe hopping I can tell you. Sometimes back to the same countries (which makes shooting these things out of sequence a good way to save money and add value by changing locales at frequent intervals) but that’s okay... it all serves the story and these transitions are funky.

And that’s my short review of RED 2 done, I believe. If you liked the first one and want to see a sequel which, remarkably, wont sour the sweet taste of the original (as so many of them can) then go see this movie. And if you haven’t seen the first one... well, having the background of the first one is better but you can pretty much gather the relationships between the characters as it goes along... and besides, it has Helen Mirren causing mass destruction... so go see it anyway!