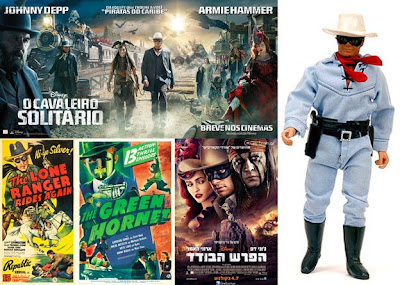 The Lone Ranger started out his life in a radio series in 1933. He then rode into novels and a couple of serials (now sadly lost, at least in their original serial format) and then the famous Clayton Moore TV show... followed by a few mis-fires of movies along the way. The latest mis-fire of a movie is by Gore Verbinski and it’s simply called... The Lone Ranger.

I wasn’t the biggest Lone Ranger fan as a kid, but I did quite like watching episodes of that old Clayton Moore show and I also had those brilliant Lone Ranger action men which weren’t quite as big as a regular action man but were certainly about 10 inches tall. They even had a flexible grip on them to hold their six shooters if memory serves me correctly. For the record, I had the three basic figures they released... The Lone Ranger, Tonto and Bush Cavendish. I didn’t have Silver... that would have been too extravagant. Bush Cavendish was, of course, modelled after the actor who played him in multiple episodes in the TV show, Glenn Strange, who had played the Frankenstein monster for Universal three times in House Of Frankenstein, House Of Dracula and Abbot and Costello Meet Frankenstein. I didn’t know that as a kid though and I was probably unlikely to make the connection... my Frankenstein monster action figure was firmly modelled on the Karloff portrayal so there was really no resemblance between that and my Butch Cavendish toy.

Most people seem to forget the lineage of The Lone Ranger character in terms of his relationship with another radio, film and TV sensation who was created by the same writers... The Green Hornet. Because of rights issues with various companies exploiting the two properties, it’s rarely if ever referenced except on the Radio shows but The Lone Ranger’s secret identity is John Reid and he is the great uncle of Britt Reid. It’s the silver mine that The Lone Ranger uses to make his silver bullets from that ensures the wealth of Britt Reid’s family in The Green Hornet but, like I said, it’s more of a family secret now due to legal obstructions.

Now I’m not the biggest Gore Verbinski fan, I have to say. I loved the first Pirates Of The Caribbean movie but that was about it. I think they all went downhill from there and you can see how unmoved I was by Rango right here. The Lone Ranger is a film that has had really bad word of mouth and is being hailed as this year’s John Carter in terms of the capacity to lose money... although I have to say that, asides from a few problems I had with the writing of the titular character in John Carter and the penchant to give a rational scientific spin to the supernatural aspect of the main protagonist finding himself a stranger in a strange land, I actually thought quite a lot of that particular movie. So I wasn’t completely convinced by the bad word of mouth on The Lone Ranger and just see it as a symptom of the lack of willingness in modern audiences to embrace the old fashioned pulp heroes that I love. So I went in with a fairly open mind I have to say and the early signs, once the film began to play out the first few scenes, were encouraging.

Yeah, that’s right. The new version of The Lone Ranger has a perfect set up. An unexpected time period setting with an elderly Tonto to relate the story of the film to a young masked boy in a cowboy suit, followed by the collision of the two main characters in a heady action sequence which immediately brings their chemistry out and makes for some thrilling and humorous watching. Unfortunately, and quite surprisingly after this strong an opening, I have to say, the film begins to falter and spiral down the more it plays out after this initial set up.

It doesn’t immediately fizzle and the characters are written and played with a certain amount of wit, which certainly keeps things bobbing along (just to confirm, Johnny Depp is excellent as always), it just doesn’t really seem to pick up the pace for any great length of time as things continue and there’s very little action to speak of in the rest of the movie until you get to the end sequence. It doesn’t get boring exactly... it just gets, kinda, less than it could have been as opposed to ones expectations... or mine at any rate. Which is a shame, really. I think a few more action scenes, or at least extensions to the smattering of “almost but not quite going for it” action throughout the rest of the movie (up until the end sequence, which it gets back to its hell bent for leather pacing) would have served to punctuate the movie with more emotional investment in the characters and might have made it a great film.

As it is, it doesn’t quite make good, let alone great. And that’s not what I was hoping to be writing today.

On the other hand, it is full of some great things. Armie Hammer’s portrayal of the title character is, perhaps, written a little too pure for an adult but he does it well and Depp has a ball with Tonto and, helpfully, the two actors bounce off each other well. Ditto to William Fichtner’s turn as a rather more disturbing Butch Cavendish than I remember and more shout outs for Tom Wilkinson and Helena Bonham Carter, who is maybe a bit larger than life in the role of the madam of a brothel but certainly fits the mood and shines whenever her and her “special leg” are on screen. Extra special praise to Ruth Wilson as Rebecca Reid, who actually manages to add a real touch of down-to-earth emotion to her character in direct contrast to the hammy but enjoyable theatrics around her, without clashing with the style of the picture. I was really impressed with her in this and next to Johnny Depp, she was the best thing in it.

At least in acting terms. The rolling western scenery and beautiful cinematography also get a big hug from me. Many references to locations used by Sergio Leone (which I’m sure were probably all postmodern references to John Ford anyway) are included which provide the... “that was where Harmonica in Once Upon A Time In The West was made to...” moments in the movie. There are a fair few of these.

The score is fantastic in many ways, too. I find Zimmer a bit hit and miss still but I have preferred his last five years or so to most anything in his earlier back catalogue. I did get annoyed at the obvious references to the Leone film I just mentioned, though. In the third Pirates Of The Caribbean movie there’s a cue called Parlay, and it’s a dead rip off in structure and orchestration to The Grand Massacre scene from Morricone’s Once Upon A Time In The West score... well there’s nothing quite so drastic in The Lone Ranger but there is certainly a lot of music which takes its tone from this cue and it did keep popping me out of the movie at frequent intervals, I have to say. However, it’s a great score and though Zimmer hits you with The Lone Ranger’s key signature music, The William Tell Overture by Rossini, which has been accompanying the character in most of his adventures starting with his original radio appearances, he only plays it for a minute or two near the start of the movie. What he does is cleverly hold back on galloping into the full overture until the spectacular end action sequence, where he plays it to death and throws his own variations in on it too in a stunning, musical tour de force which should make the hair of most fans of this well worn character stand on end.

What the music can’t do, unfortunately, is make the final train chase sequence make more sense when it’s all edited together. I just got lost very quickly and found it harder to follow than I was comfortable with. I think it’s because the sequence is a little more complex than usual as opposed to bad editing. Which is a shame because the music really whipped up the mood for this final hoorah of the movie.

And that’s really all I’ve got to say at this stage, I think. The Lone Ranger is not a terrible movie and I liked bits of it so much that I’ll probably grab the BluRay of this when it hits the sales for a repeat watch. If you are into westerns, and this character especially, then you will probably want to see this take on it. It brings some nice originality to certain parts of “the legend” that are interesting tweaks.

If you’re going for Johnny Depp... he, too, is a good reason to see this. His turn as the older version of Tonto was so good it took me a while to even work out it was him... although the younger version of him seen in the majority of the movie is definitely easy to spot as Depp and, dare I say it, there are definitely some sly nods to his Jack Sparrow persona in a couple of sequences.

If, on the other hand, you’re not a fan of westerns and don’t know your Lone Ranger from... well... from your Green Hornet, then this is probably not going to be a good movie for you. It does lack a certain oomph in some places and even with some decidedly vicious, cannibalistic bunnies and a certain uneasy lack of balance about whether it’s trying to be a family film or something more horrific, it probably won’t do much for you. A sequel might be a nice idea but I suspect it stands little chance of getting one now. Oh well. Hey ho, Silver.
Posted by NUTS4R2 at 20:52