Die Hard With A Vengeance 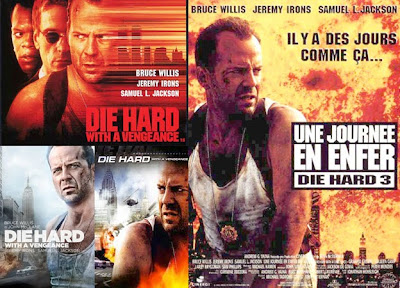 Warning: Spoilers with a vengeance.

Right. I finally get around to following up my Die Hard Christmas Double Bill (the first two movies reviewed here) with a look at the third, and my favourite, in the series, Die Hard With A Vengeance. Yeah, the titles don’t get any better from hereon but the script on this one is pretty cool.

There’s so much good stuff in here I almost don’t know where to start but... let’s start with Bruce Willis. The studio took the risky move of having him separated from the character of his wife from the first two films and portrayed as a washed up cop in the middle of suspension from active duties. But he is pulled back in when Simon Gruber, played absolutely brilliantly by Jeremy Irons, asks the police to get hold of John McClane...after he has first blown up a department store to "get their attention". He then proceeds to play an elaborate game of cat and mouse with both McClane and an electrician called Zeus, played by the then up and coming Samuel L. Jackson, who accidentally gets embroiled in the first installment of the “Simon says” game that Gruber has cooked up.

If the name Gruber is ringing any bells, that’s because this film’s lead villain is the brother of Alan Rickman’s lead villain from the first movie, Hans Gruber... which is a nice tip of the hat for the writers to throw in here. Especially since this script was not originally intended to be a Die Hard movie and that, at one point, it was going to be a Lethal Weapon movie.

The cat and mouse game that Gruber plays with McClane and Zeus is, of course, an elaborate distraction to allow Gruber to tie up the police with various shenanigans as a distraction while he robs the Wall Street equivalent of Fort Knox, in a plan which he hides under a terrorist act, in much the same way that his brother did in the first film. But it’s actually all about money, of course.

Now, anybody who’s seen a number of 50s, 60s, 70s and 80s TV shows will recognise this old plot at once. It’s the episode of “fill in your blank TV title here” where the main hero is run around from phone box to phone box in a city and has to try to figure out a way to outsmart the main villain while still staying on time with the various phone calls and tasks set him. It’s a cliché but it works a treat if it’s written well and it certainly is written well here. It’s also a cliché which is still being used these days, believe it or not. Take a look at The Da Vinci Code sequel Angels And Demons (reviewed here) and you’ll realise that it’s pretty much the same thing.

This movie has great dialogue, great chemistry between not just the lead actors but by all their supporting players and some great and sometimes bloody action sequences which manage to tread a thin line between brutally disturbing and outright fun all the way through the film.

And in Micheal Kamen’s last score for the series (he had tragically died very young before the fourth one was filmed) he really knocks it out of the park. The musical pieces, built around the tune When Johnny Comes Marching Home, are amazing, although curiously they are mostly used during the bank raid when John McClane isn’t present (but still, the audience gets the idea). These are an absolute stroke of genius and really make this film. Now I understand Kamen wasn’t necessarily happy with the inclusion/intrusion of this melody into his score and he had to write new pieces to incorporate it where he’d already scored them with something else, but I have to say it works an absolute treat and has you rivetted. I remember buying the original soundtrack album when it came out and being absolutely gobsmacked that none of these cues were represented on the album in any way. I had to wait up until last year with the posthumous release of a 2 disc expansion to finally get these beautiful Kamen arrangements of Johnny Comes Marching Home. Still... all I can say is it was worth the wait.

The film, it has to be said, isn’t as tightly shot as the first movie. It’s not quite as smart in the way things are achieved but it’s still got enough oomph in it to totally dwarf, in my very humble opinion, the first two movies before it. Absolutely spot on and it’s a shame Samuel L. Jackson wasn’t tapped to take part in any of the other follow ups to this movie because his contribution here is equal to Willis’ McClane character in impact and they complement each other so well throughout the running time.

If you’re a fan of the series then you’ll certainly love this entry. If you’ve seen any of the others and not thought too much of them, still see this one as it’s one of the best written action thrillers of its decade. And Bruce Willis still has hair!