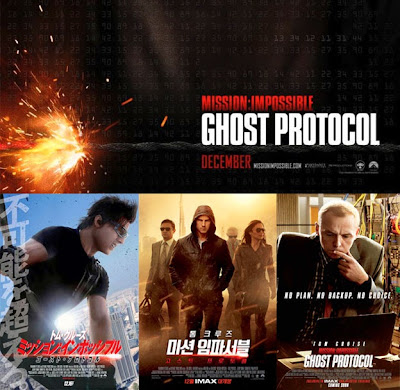 Well this is interesting. I’ve only ever seen one other Brad Bird movie (which also happened to have an excellent Michael Giachinno score) and that was The Incredibles. Turns out, the fourth in the Mission Impossible franchise is actually his first stab at directing a “live action” movie and I have to say that I found this one to be the most entertaining in the series so far. Maybe it’s because espionage movies like these and others like the Bond movies are all just big live action cartoons anyway that makes Bird a natural for this kind of assignment. Or maybe I’m being a little less charitable than I could be and should just swallow the fact that Bird can obviously direct live action fine and does the animated stuff because that’s what he’s more interested in. Either way, this one is certainly the best of a sometimes lukewarm bunch of movies so I’m glad this guy stepped up to the bat.

Starting off with a jailbreak sequence as two agents, including Simon Pegg in a much less annoying incarnation of the character he played in the previous movie, get Tom Cruise’s Ethan Hunt character out of a prison... but with him obstructing their plans just a little because he won’t go without bringing someone  else out with him... the opening titles jump start from Cruise telling Paula Patton’s Agent Carter to “light the fuse”. After a rousing titles sequence wherein we see key scenes from this film picked out and excerpted as part of the design, we go into standard Mission Impossible territory with a caper to get inside the Kremlin but, the team is piggy-backed by someone else after the same thing as they are and Ethan and his team are basically framed for blowing up the aforementioned building.

So the team is disavowed and gone ‘rogue’ (yet again... they’re always going off to do their own thing, it seems to me) and it’s up to Cruise, Pegg, Patton and their new bestest buddy, the always excellent Jeremy Renner, to stop the bad guys from nuking the world.

This film has a lot going for it. Simon Pegg loses his fake American accent (for some unexplained reason) and provides some excellent comic relief while still being a very credible part of the team. Renner and Patton are very good support and Renner even takes over from Cruise and does the ‘iconic’ dangling into space moment in this entry... seriously though, do we really need these sequences? And Michael Nyqvist, the original Mikael Blomkvist in the Swedish adaptations of Stieg Larsson’s The Girl With The Dragon Tattoo (reviewed here), The Girl Who Played With Fire (reviewed here) and The Girl Who Kicked The Hornet’s Nest (reviewed here) makes for a credible and pleasantly non-theatrical bad guy, for a change. This is all good stuff.

As is the nice gadgetry and little quirky things that Bird and co have put in for this little outing. The movable video corridor that Cruise and Pegg use to infiltrate part of the Kremlin, for example, is absolutely brilliant, funny and recalls the days when Wiley Coyote would order a new gadget from the Acme Company to help him try and catch Road Runner. Given Bird’s track record with animated storytelling, I’m wondering if he had some major input into that part of the writing.

Also cool was Cruise’s return to a public telephone to give his mission briefing a little helping thump to self destruct and a scene where the mask making equipment goes completely wrong and the team has to improvise. It’s all pretty good stuff.

More importantly, for the first time in a Mission Impossible film that I can see... you don’t know what’s going to happen way in advance of it happening. It doesn’t rely on a “oh, it was you all along” series of twists, which are usually easy to figure out because the studios get nervous about the audience and telegraph them too quickly, and instead we are left with a storyline where everything is up front and laid out with no surprises.

Having said that, however, there were two little things I did see coming a long way off... they were Ving Rhames and Michelle Monaghan and, I’m afraid, I was kinda expecting them to show up at some point. Rhames due solely to his past association with the film series in that he is now, along with Cruise, the only person to have appeared in all four films in the franchise to date.

With Monaghan’s character, Ethan Hunt’s wife, she is referred to all the way through the film as either having left him or having died. The fact that the writers didn’t just come up with a way to leave behind such an important narrative point very early on in the picture in a very clear manner practically writes up in mile high letters that she will be appearing at some point in the movie... I just don’t know where they’ll go with this character if they make a fifth one. Would be silly to leave her behind I think... especially since Monaghan is such a good actress and star personality.

Giacchino’s score is good too... and not just because this one is especially rich in reorchestrations of Schifrin’s original theme (which it is, the most Schifrin heavy score of all four movies I think). Proving himself one of the most versatile composers working in Hollywoodland right now, while still being humble enough to amalgamate or mimic other composers works for the good of whatever franchise he’s working on, I think Michael Giachinno will be around for a very long time and be the composer of choice for a lot of future film-makers who haven’t even started out yet. Only time will tell if he’s the Jerry Goldsmith of his time, but he’s certainly up there with the likes of Alexandre Desplat and Brian Tyler as far as I’m concerned. We shall see what we shall see... and hear what we will hear, I guess.

Mission Impossible: Ghost Protocol is a really cool entry in the franchise for fans of the previous films and probably a good enough jumping on point if you’re not. Definitely will be on my “one to watch again in ten years” list. Worth a look.

Mission Impossible at NUTS4R2
Your mission, should you choose to accept it, is to click on one of the titles below to take you to my review.