The Great Movie Serials: Their Sound And Fury 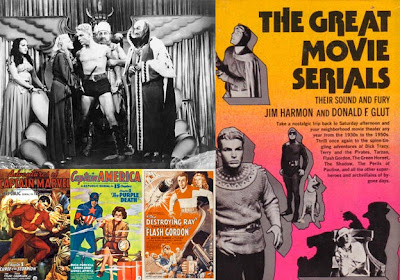 When I find a bargain of a second hand book I’m not usually accustomed to paying a tenner for it. But I could tell from the image of Jean Rogers as Dale Arden peering at me from the spine on the shelf, about a year ago, that this one was something special and “of its time”. And that time, according to this first edition (of probably only one pressing I’m guessing, from its rarity), published in Great Britain by Woburn Books... was 1973. And therein lies both the deep joy and slight weakness, in contemporary terms, of this particular volume.

Next to the £10 marked up price, written in pencil on the first interior page, there is also an ink penned inscription written, presumably, by the previous owner of this adventuresome tome. Christmas 1973, is what it reads and I wonder if, perhaps, this book was sold on as a result of the death of the last reader. Whoever he or she was, I’d have to say to any ghostly, lingering spirit of that person, their Christmas present came to find itself in good hands again. Re-bought by someone who will value and cherish it for what it is. Even its imperfections.

When I was a young un, my mum and dad would take me to the local library in what was then known as Lower Edmonton but is now, more politically correctly called, Edmonton Green. My dad would sometimes take me up to the reference library and sit with me so we could flick through books with pictures in and he could describe to me, with their aid, all of the science fiction and fantasy films of bygone decades that I’d never seen and probably never would, unless one of the television channels decided to show one some time. Don’t forget, this is in the time before home video was even a wink in the consumer’s eye and movies were rarely shown more than once every three years or so (if the channel happened to have the rights to show it at the time). We had a small black and white television set with, in those days, three channels (BBC1, BBC2 and ITV) and that was as good as it got.

Many an hour was spent looking at the pictures in these books of B-movie monsters and robots of whom my dad would tell me stories from his personal experiences of watching them cavort and cut a path of celluloid destruction on the silver screen. Now I have most of these things on DVD I suspect but then, the unobtainable nature and the secret knowledge gained from the wisdom of books with the black and white photographic stills of these things was a very special thing and it was the way me and my father bonded (this is the same library from which my father borrowed a long playing record of the Orson Welles radio broadcast of War Of The Worlds... but that’s another story). I’m pretty sure that one of the books we used to look through was this one I’m reviewing here. It only has two small runs of black and white photos in it near the centre but that would have been enough for my father to show me images from the Flash Gordon, Batman and Superman serials etc. This was the stuff of legends but it was a reference library so these books weren’t really things we could take home with us and read. And once my mum had done with obliterating the Agatha Christie shelves in the downstairs library, it was usually time to go home.

1973 was a good year for me. Or it might have been 1974 actually. Can’t quite recall the year but I was five or six years old... and the BBC did something wonderful (asides from showing the original King Kong late one night which was... oh wait... that really is another story). Anyway, the BBC had a special afternoon on, probably BBC2 actually, of something they were showing to see if it would be popular. They were showing the original 1936 serial of Flash Gordon squashed together with the episode tops and tails taken out and split into two big parts, sandwiching a Hoppalong Cassidy movie in the middle. This turned out to be my equivalent of heaven and my father and I watched every drop. I was instantly a Flash Gordon fan.

The serials must have proved popular for the BBC I guess, or at least were cheaply obtained, because for the next ten years or so after that, they started showing the actual serial episode versions of this and other good serials at regular time slots. At first they would be shown during the Christmas holidays, then they would move to every weeknight at a 5.40pm time slot (followed by either a Charlie Chan, Saint or Falcon movie) and also during the summer and Easter holidays in the mornings, right after the French TV serial The Adventures Of Robinson Crusoe and before Why Don’t You? I watched them all and, when they were on in the evenings (pre video recorders, remember?) my dad would watch them with me. We would watch Flash Gordon, carry on with him on Flash Gordon’s Trip To Mars, watch him victorious in Flash Gordon Conquers The Universe, and then watch as Buster Crabbe would change his hair colour for Buck Rogers. Then we would thrill to King Of The Rocket Men, Hawk Of The Wilderness and Daredevils Of The Red Circle. Those were the days.

This book remembers all of these too but, it has to be said, not as vividly. That’s because, as the authors say in the book, a lot of these serials just couldn’t be seen to be reviewed. What could be gleaned mostly came from childhood memories, American television showings, interviews with some of the major players and readings of the original scripts. So that’s one thing... because I live in a time where I have a lot of these serials (commercially available or from other sources) I actually am able to see the things being reviewed, in some cases, when the writers (at the time) might not have had a chance to see some of them at all.

And like I said, the book is of its time.

Because these things weren’t easy to see, a lot of the book, more than a book dealing with the same subject matter would do today, it taken up with almost blow by blow accounts of what happened in a particular serial. Which is interesting and still, in some cases, quite valuable in a way but, even so, the talk about various tropes or quirks of these startling chapter plays is buried under the descriptions of the episodes themselves. Which in 1973 must have been fantastic (I wish I’d had this book as a kid) but nowadays can drag a bit when the serial being described is something you only watched a few years back.

Still, that’s not to detract from just how good a book it is and, more importantly, just how enthusiastic the two writers are (George Lucas must have thought so too because I seem to remember that Donald F. Glut was the guy who wrote the commercially released novelisation of The Empire Strikes Back in 1980... which is pretty much as close to a modern cinema serial you’re going to get). You will want to watch all these serials again, once you read about them, which is a shame because some of them really are still lost to time, never to be seen again. Okay, so maybe I live more in hope now that I live in an era which has managed to restore to us a complete print of Metropolis (reviewed here) but I suspect a lot less effort would be made these days to locate an old Lone Ranger serial as opposed to a masterwork of early German Expressionism. But still... I can live in hope.

The thing is, though, I could disagree quite violently with the authors opinions on some serials... but I don’t know if they’ve actually seen them or not. They make a point about just how bad the two Batman serials were but actually, I’d like to go on record saying that, although I agree with their appraisal of Batman and Robin from 1949, I actually really enjoyed the original Batman serial from 1943. That was a class act (in serial terms) and I don’t care who knows about it. There’s also the fact, and the authors warn you about this up front, to be fair, that the book deals almost exclusively with the talkies and the silent era serials are mostly left unexplored in any great detail.

That being said, its also a book that holds great treasures and is certainly a thing of value and wonder. For instance, among the many footnotes in the book, I came across this little gem...

“Comic relief characters were very much a part of serials of the talkie era. Syd Saylor’s particular trademark was the manipulation of his bow tie due to a large and manoeuvrable Adam’s apple.”

Now come on... that’s something you don’t read in books that often these days, is it? I showed that passage to my dad and he said... “You know... I think I remember him and that act.” It doesn’t get any better than this.

There’s also a little insight into stuff like the way actors in serials were cast due to their resemblance to the various companies’ main stunt men and if one or two of them had a checkered history, it’s touched upon here, if you can sort out the wheat from the chaff. It’s always interesting to know which A-listers died in the war or which matinee idol went to prison for 40 years after murdering someone. All good knowledge to be in possession of... hidden in among the jokes and asides about topical issues like the comments levelled at the then Governor Ronald Reagan. If only they’d known!

At a basic level, though, this is what you need to know if you decide you want to make an investment in purchasing what is now a harder to obtain and considerably more expensive item than what I payed out for it last year, according to Amazon. If you are after a book that covers the stylistic traits of these serials and looks at how they came into being and evolved during their “relatively” short cinematic lifetime, then this book may be less than what you are looking for. Some of this stuff is covered, for sure, but not in any academic detail, it has to be said. On the other hand, if you’re looking for something which, for it’s day, was probably the most knowledgable god-send of a book and is something written with a real enthusiasm and love of the genre, then you could do a lot worse than read this joyous celebration of a slice of cinematic history that a lot of the younger kiddies seem to have forgotten about (or not had the opportunity to see) these days. If you’re a true fan of these old action adventure romps with cliffhanger endings and, quite often, cheated or ludicrous solutions to those cliffhangers at the opening of the next episode, then this book is surely written for you.
Posted by NUTS4R2 at 18:30